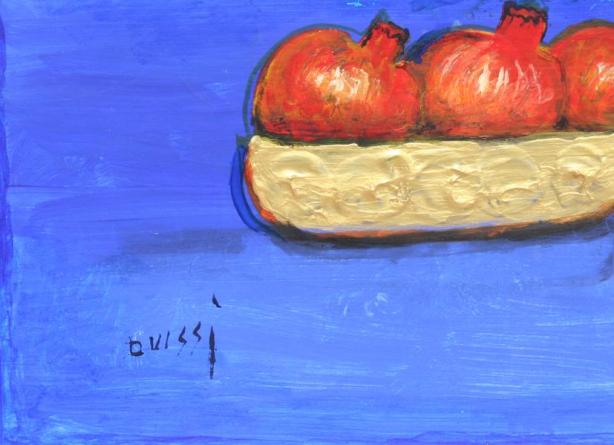 Some people say it’s too late, that people are breaking the rules, that the whole thing is just political. But I believe the experts, having been one myself who was not believed 😁. So, for example, I won’t touch anyone.

I also believe the United States of America is on a serious time-out.  “You just sit there for awhile and think about whether you want to leave your kids this mess you’ve made. Do you think all they care about is buying stuff when the whole world is turning into a giant cesspool? Well? Do you?”

Another great one by Allie Brosh

For the fortunate, toilet paper shortages may be our new muse. During this crisis, we should do the best we can for those who are vulnerable — physically, emotionally and financially–and consider that maybe it’s a good thing that we are being forced to sit here for awhile and think about it.

Caravaggio (not his real name) painted fruit. He is among the best of the Italian Renaissance painters and also the most tragic. At six, most of his family died from the Bubonic Plague. He was a fighter and murdered at least one man before he died of lead poisoning at the age of 39. Caravaggio was married, but apparently not very loyal. The young man in this painting was Caravaggio’s lover, as his expression seems to tell us.

Boy With a Basket of Fruit by Caravaggio

My good friend Janet Econome is the opposite of Caravaggio. After a happy Greek childhood, adult Janet has promoted peace and understanding. Unlike Caravaggio’s stark realism, Janet’s style is impressionistic and playful. She adores her husband, Dave. She is 67 and doesn’t use lead based paints.

Rainier Maria Rilke is my favorite poet, although maybe that is not saying much since he is one of the few poets I have read since sophomore English.  Rilke’s work was not well-known by the general public during his lifetime, but today he  is recognized as a major poet.  https://www.poetryfoundation.org/poets/rainer-maria-rilke.

Rilke’s poetry is mystical and lyrical, searching for something behind the surface, and transcendent resolutions. “The Apple Orchard” seems to speak to our moment, as we strive to silently give ourselves and grow.

Come let us watch the sun go down
and walk in twilight through the orchard’s green.
Does it not seem as if we had for long
collected, saved and harbored within us
old memories?
To find releases and seek
new hopes, remembering half-forgotten joys,
mingled with darkness coming from within,
as we randomly voice our thoughts aloud
wandering beneath these harvest-laden trees
reminiscent of Durer woodcuts, branches
which, bent under the fully ripened fruit,
wait patiently, trying to outlast, to
serve another season’s hundred days of toil,
straining, uncomplaining, by not breaking
but succeeding, even though the burden
should at times seem almost past endurance.
Not to falter! Not to be found wanting!
Thus must it be, when willingly you strive
throughout a long and uncomplaining life,
committed to one goal: to give yourself!
And silently to grow and to bear fruit.

I have loved grapes since the first time I ate one. I don’t regret that I ate a bag of them in Mongolia even though they made me sick for two days —  or the price of the ones I drink. My views on grapefruit are more complicated.

I don’t know where I first heard this riff but I have made a point to listen to it regularly for the past 20 years, and it makes me laugh every time.

Leave it to Dr. Seuss to get to the deeper meanings with the vocabulary of a three-year-old. In this Dr. Seuss classic, three carnivores try to outdo each other using apples. Sinister forces conspire to ruin their fun but our heroes are ultimately triumphant. Find out how by listening to the video. (It’s shorter than 4 minutes and I know you have time.)

So it’s not fruitless. You just have to spend some time looking for the fruit.