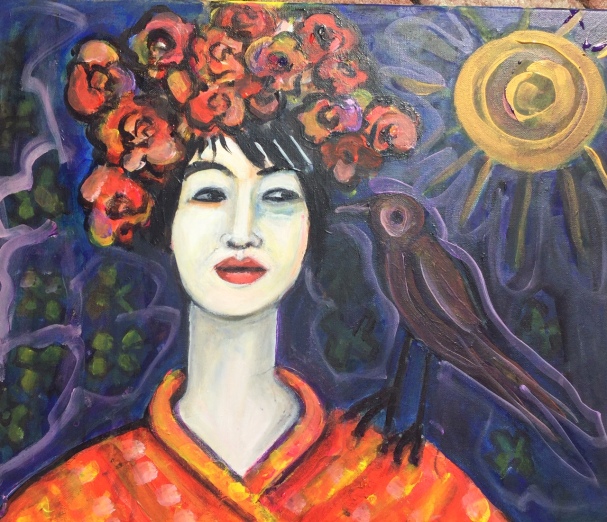 When I was in high school, “alternative” radio stations were starting up. KPCC in Pasadena was one of the first and, at the time, its programming was revolutionary. While most radio stations were playing 15 pop songs 100 times a day, KPPC was mixing rock and pop with jazz, classical, international, blues and folk. My favorite KPPC program was 50 pieces of music about birds.

I don’t know what made me think of this, but it occurred to me that our bird friends have something to say to us right now. They see the world from overhead, so they get the big picture. They tell us a lot about the health of our ecosystems. The ways they navigate and socialize and solve problems are an endless mystery to the smartest humans.

And thank you, birds, for reminding us that when our wings are clipped, we can still sing!

So in honor of birds and Vic (a huge fan of birdies), here are a few related songs and stories.

Still stuck in my craw after 50 years, my own favorite bird song is “El Condor Pasa” (literally, “The Condor Passes”) by Simon and Garfunkel. It is adapted from a Peruvian folk song and reminds us how birds inspire those of us who are “tied to the ground.”

When I lived in Mexico, I was the guest of a garden full of birds, mostly hummingbirds, doves, parrots and grackles. I loved the grackles the most. The locals call them “uracas” or “zanates.” They are very smart — they knew me — and very vocal. According to Mexican folklore, their vocalizations were stolen from the sea turtle and express life’s Seven Passions –Love, Hate, Fear, Courage, Joy, Sadness, and Anger.

I also adored my hummingbird hosts. My friend Wendy, a naturalist and photographer, reminded me today that the Rufous hummingbirds in my Mexican garden migrate every spring to her garden in Port Townsend, Washington! Here is a photo Wendy took this week of a Rufous hummingbird who had just arrived at Wendy’s.  The green Anna’s hummingbird, who lives in Wendy’s garden year-round, is looking at her Mexican friend as if to say “wow, you came all that way?” And guess what, no problem getting over that border wall 🙂

Vaughan Williams is one of the 20th century’s best classical composers. He was a socialist and believed fine music belonged to everyone, not just the elite, which is apparent in his most acclaimed work, “The Lark Ascending.” Although the piece is soothing and reflective, it was considered a symbol of England’s national identity during World War I. So yeah, soothing, reflective and pride in our community should be a thing right now…

There are so many wonderful artworks depicting birds. But I especially love the story of Frederick Stuart Church, who was a painter and an illustrator for Harper’s Magazine. As a young man, he was an ambitious businessman when the Civil War broke out. He was among the lucky 20% in his platoon who survived. After seeing so much death and destruction, he returned to civilian life with a commitment to paint scenes of harmony between humans and other animals, and he especially loved exploring our relationships with birds.

My favorite jazz song about birds is “Skylark,” written by Hoagie Carmichael. Many of the best jazz artists have performed this song, including Ella Fitzgerald, Chet Baker, Dexter Gordon and Paul Desmond.  The song expresses a  longing for romantic love, which I don’t think is what’s on our collective mind these days but anything this beautiful is food for the soul. I think Hoagie Carmichael himself does it best (but a close call —  Chet Baker almost better).

One of Vincent Van Gogh’s most famous paintings is “Wheatfield with Crows.” Many critics believe the turbulence of the scene expresses Van Gogh’s inner turmoil and loneliness, which eventually lead to his suicide. And while some say the crows are harbingers of death, others believe Van Gogh intended for them to be symbols of resurrection. We are going with the resurrection story, right?

Every culture’s folklore includes bird stories, many associated with creation and discovery. The Greek god, Zeus, launched two eagles in different directions, believing the center of the world would be the place where their paths crossed, which is now called Delphi (and fortunately for Zeus, the birds cross paths over Greece!). The ancient Aztecs were advised by god that they would find the location of their own spiritual center where an eagle was perched on a cactus devouring a snake. And voila, Mexico City. So when that second bowl of mac and cheese is getting in the way of your intent to pursue creativity and discovery, think of the birds. I dunno….

There are so many great pieces of music about birds, it’s hard to choose just a few. And although on most days I might prefer “Bird on A Wire” by Leonard Cohen or “Bluebird” by Buffalo Springfield, I chose “Blackbird” by the Beatles because of its remarkable story. Paul McCartney wrote “Blackbird” in honor of the women who fought for school desegregation in Little Rock, Arkansas. Paul wrote the song and recorded it in 1968 — and then in 2016, he met two of the Blackbirds, Thelma Mothershed Wair and Elizabeth Eckford. 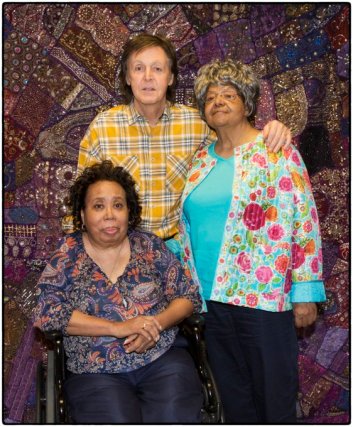 Here is Paul singing “Blackbird,” which I am dedicating to a friend of mine in Louisiana who is flying into the light of a dark black night.

In 1963, Alfred Hitchcock forced us to question our Pollyannaish views of birds in his award-winning movie, “The BIrds.” Watch the trailer. Then ask yourself “Was it really China who started all this or should we be calling it something else?”

For great isolation-time entertainment, check out “Bird Brain” on Nova about the remarkabilities of birds. It’s on Netflix right now!

If there was ever a bird song that speaks to this time in our world, it’s “Three Little Birds,” by Bob Marley. Sweet as can be, telling us every little thing gonna be alright.

A Harris hawk on my head in Ireland.