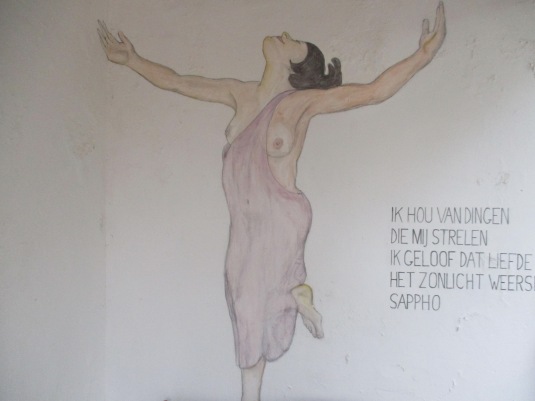 Sappho on a Lesvos hotel wall

Imagine a place where every need created by a continuing, relentless disaster seems to be organically filled by people who are committed to One Important Thing.  And when needs change, people change. With hardly any money or rules. The work on Lesvos is not perfect and the task is impossibly difficult but Lesvos provides plenty of evidence of what people can do.  It is a place where you meet many heroes.

Here are a few of the heroes I met in just 8 days:

The People of Lesvos 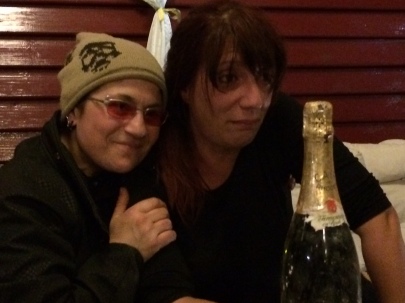 Yani, a very popular restaurant owner, donated her family’s hotel for a refugee transit center. Here, she is crying after Cookie gave her a lost bottle of champagne discovered during the hotel’s restoration. The bottle was given to her by her now-deceased father to celebrate her college graduation. 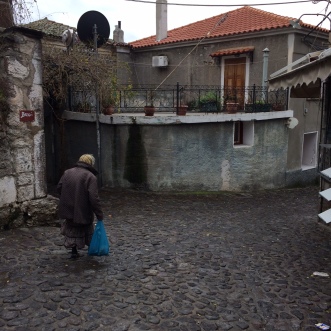 Members of the community who were already suffering from the troubled Greek  economy quietly supporting the island’s humanitarian efforts. 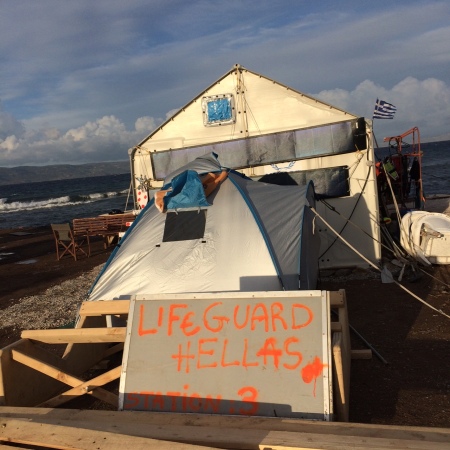 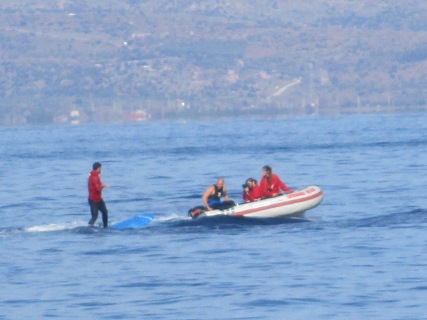 During the quiet times, lifeguard training included power surfing, soccer and even swimming. 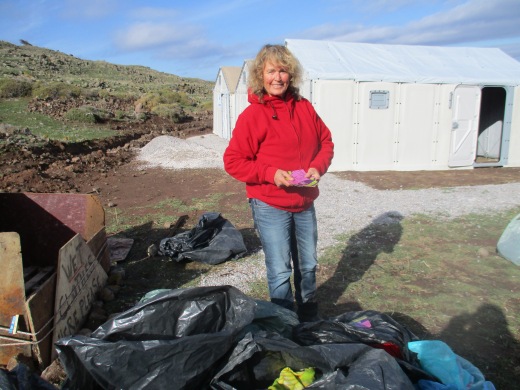 Alison Terry-Evans, an Australian, created a nonprofit to clean refugee clothing so that it can be re-used by other refugees rather than being sent to landfill. Imagine being responsible for 1,000 pounds of laundry every day. Better not to google their name without including the search terms “Lesvos” and “laundry.”

The So Many Volunteers, Especially Scandinavians 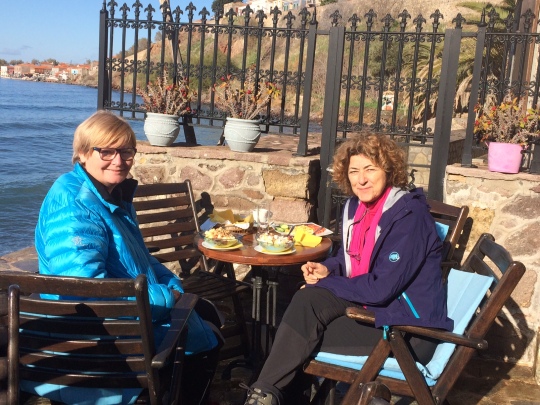 Two new friends, Anne-Lene from Norway and Marijke from Holland, both in Lesvos to volunteer for the second time in a year. I was often the only non-Scandinavian in any volunteer group but they all speak perfect English.

The Journalists and Film Makers 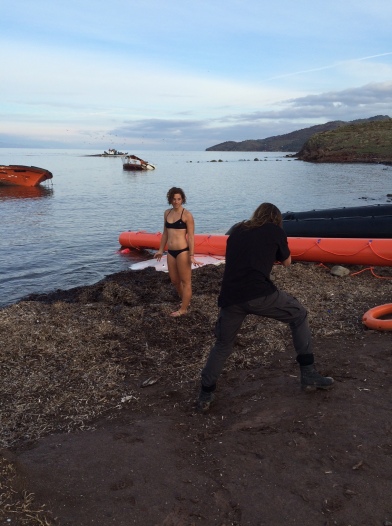 Photographer making sure the Hellenic Lifeguards get the credit they deserve. 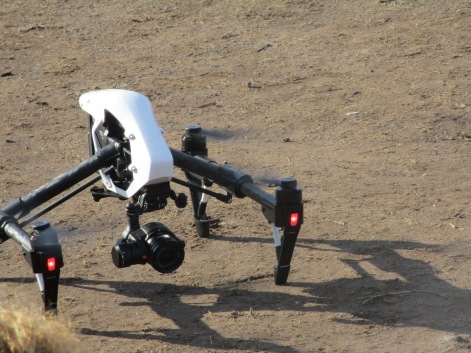 Atlas the Drone,  fearless photographer and least flirtatious member of the film crew. 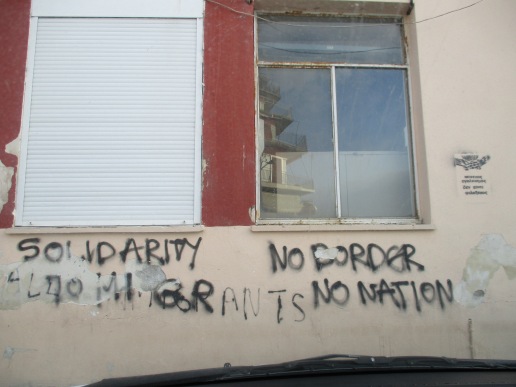 Activists who advocate for the refugees and fight against nationalism and bureaucracy.  Not everyone appreciates their methods, but they move the center.

The Canine and Feline Volunteers 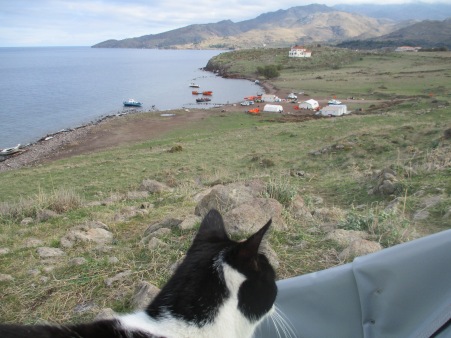 Beach Cat would follow me up the hill at Lighthouse, although actually he was in front of me.  He would then join me in surveying the expanse below. Or maybe I joined him. 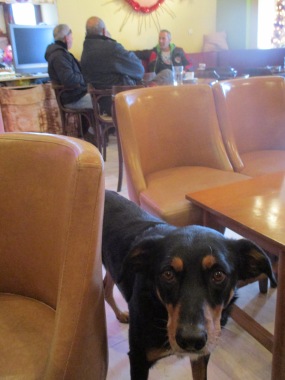 I think Anee came back as a Greek waiter. Mostly waiting for scrambled eggs.

And the people who are risking everything to find peace and safety…. 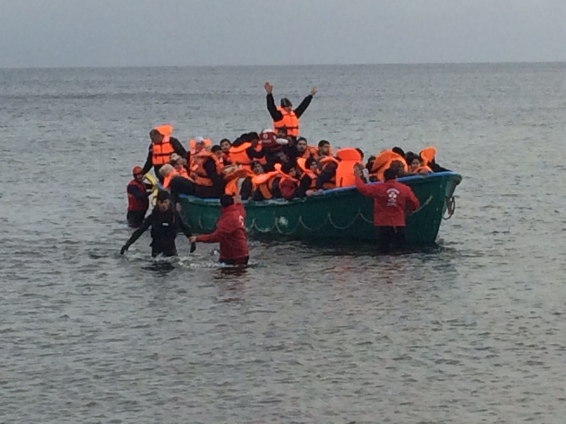 Lesvos — with half a million refugees who have shown up on its doorstep —  is just a small corner of a growing and far-reaching crisis.  Our global response to this mass migration of people escaping war and destitution will mean the difference between more war and more peace. Rather than politicizing suffering and religion, we should be standing up for our American values.  Like Lesvos.

That’s all we got, one world….

You probably haven’t seen this since 1993 — watching it again will change your day:
https://www.youtube.com/watch?v=iaAd_kpzSas