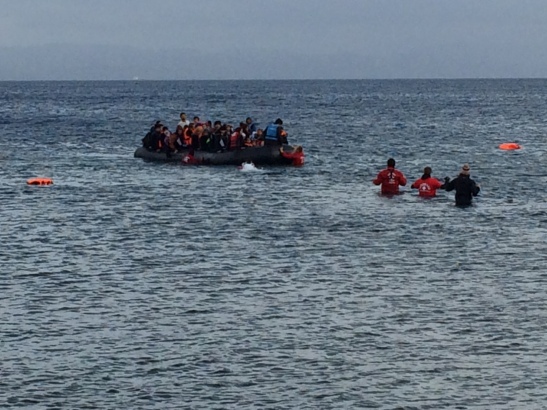 In the past month, more than 90 people have lost their lives trying to find peace and safety in Europe by crossing the Mediterranean from Turkey into Greece, adding to the 3,700 deaths that occurred in 2015.  Meanwhile, the geopolitics of fear are ramping up.  Sweden is planning to “send back” 80,000 asylum seekers.  Bulgaria is threatening to close its borders.  Some EU countries want to kick Greece out of the Schengen area, which permits free passage in and out of EU countries. Thugs have bombed the homes of refugees and politicians who know better are accusing innocent people of terrorism.

ize the acts of human beings helping other human beings in the Greek Islands.  The justification is that volunteers are “encouraging” more migration — as if people who are risking their lives to escape torture and bombs are motivated by the prospect of a bottle of water and dry clothes at the end of a treacherous journey on a rubber raft.  http://www.thetimes.co.uk/tto/news/world/europe/article4678348.ece

Does the leadership of the richest region of the world actually plan to arrest people for saving other people from drowning? Does it hope or expect that anyone would stand by where people are facing death or injury?

Those leading the grassroots volunteers on Lesvos responded immediately and emphatically to the prospect of being arrested as “smugglers” for helping the refugees who arrive on the island’s shores:

“We are not going to stop helping.” https://www.youtube.com/watch?v=7UWa9u-W6eU

The Greek government is responding as well.  Today, its navy ships were seen patrolling the waters off the of Lesvos and picking up refugees to take them directly to the registration site in Mytilene.  No one seems to know exactly what this means but dispatching these boats required an act of political courage in an environment where the new normal appears to be treating victims of war as troublemakers.

“The United States blew the Middle East to pieces and ISIS is going to put it back together.”  British volunteer on Lesvos.

“The world will not be destroyed by those who do evil, but by those who watch them without doing anything”  Albert Einstein