At Athens’ port Piraeus, refugees after getting off the ferry from Lesvos.

Refugees arriving in Athens on the ferry may be hungry and may not have opportunities — or in some cases money — to buy food before their departure on the buses that await them at the terminal.   Projekt Soup-Port is there with sustenance when the ferries come in.

Soup-Port is a group of Swiss volunteers with a truck and some mobile cooking equipment, another wonderful grassroots organization that has moved in to fill a need.

I got to see Soup-Port in action this morning.  I woke again to the iphone’s barking dogs before dawn. Soup-Port’s volunteer manager, Christian, had agreed to meet me on the Piraeus ferry dock. After a 20 minute taxi ride from my hotel, I arrived at Terminal E1 in the dark.  It was deserted and silent. In other circumstances, it would have been a little scary.  My taxi driver waited until Christian waved me down from the other side of the parking lot and then jogged out to meet me. 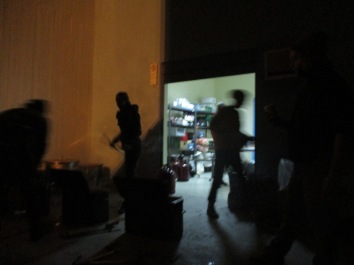 Preparing food before dawn behind the ticket office.

Behind the E1 terminal ticket office, a half dozen Soup-Port volunteers were in the kitchen of a port facility preparing food and tea for the estimated 2,000 refugees who would arrive in an hour.  I helped fill giant pots with hot water from the showers behind the kitchen.  But first, I sprayed hot water on my jeans.  Then I helped spread pita bread with hummus and wrapped the small sandwiches in napkins.  I was hungry but I didn’t eat any.

The night before, the volunteers had made 550 packages of dried fruits and nuts, and they had several crates of fresh fruit.

After loading the truck, we headed toward Terminal E3 where two Lesvos ferries were scheduled to arrive. 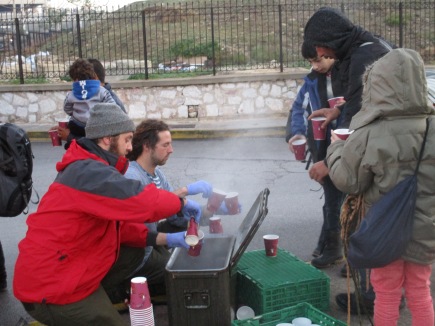 At the terminal, Christian parked the Soup-Port truck strategically to attract refugees who would not have to hurry to buses.  To provide packages to refugees who would not be able to stop before getting on buses, we set up stacks of boxes just outside the terminal gate. Trucks and cars crept off the ferry ramp.  The passengers were slower to arrive at the gate, and then they were a steady stream for more than an hour.  We handed them small bags and pieces of fruit as they walked by. Most took the time to thank us. A few tried to sneak extras.  The volunteers politely but firmly explained that giving extras to one family would mean none for another.  It was harder for me to say no. 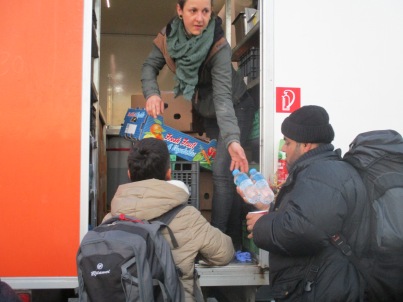 Soup-Port volunteer distributing diapers and bottled water from the truck.

We did run out of food and tea before the last groups of refugees arrived at the gate. I saw many expressions of quiet disappointment. One of the men asked whether we didn’t have something left to share with his hungry children and then kindly told me I looked tired.  I was tired but I don’t think that is why I looked tired.

All of the sites I have visited on the path of the refugees seem to need more food. Not just free food. Any food. Christian says Projekt Soup-Port may have to shut down its Greek operations in March.

No one has ever become poor by giving.