But the differences between Thailand, Cambodia and Vietnam are discernible even to a short term visitor.  Their governments, languages and currencies are different.  Vietnam is officially a socialist state but it feels like a capitalist economy. Unlike non-socialist easy-going Cambodia and the non-Bangkok parts of Thailand, Vietnam seems to be on a mission. Hanoi, the country’s northern capital and the part of the country that won the war, is vibrant almost to the point of frenetic (especially after Cambodia).  The central part of the city is wall to wall motor bikes, small retail businesses, and street stands with a feeling that everyone is going somewhere or doing something.  At night, the streets are full of families, young people and tourists eating, drinking, hanging out.  Some kind of music is playing somewhere close wherever you are. 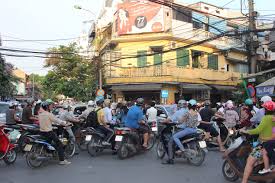 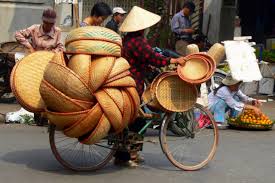 Carol and I are having a wonderful visit so far.  In Hanoi, we went to five museums, drank a lot of frozen lime-y things to beat the heat, shopped for textiles, and attended an amazing performance of Vietnam’s classic water puppets.  Hanoi is a great city for walking around — a lot of interesting architecture from the era of French colonization (mid-19th century to mid-20th century), a beautiful lake in the middle of town and tons of small and very interesting retail shops. But the traffic signals and signs are “suggestions” so watch out for the motor bikes!