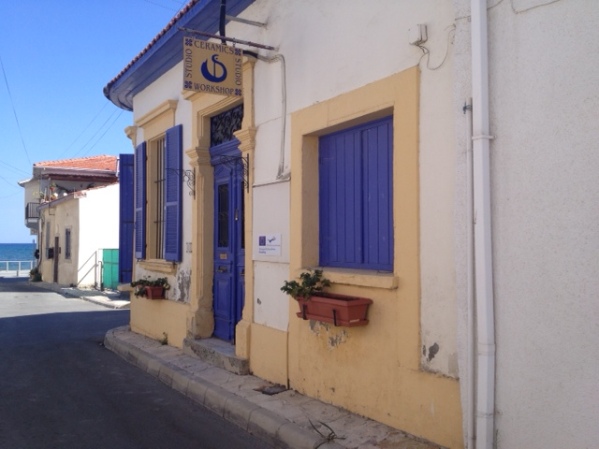 Cyprus wasn’t on my short list. Or any list.  I flew here from Tel Aviv following an elaborate multi-variable calculus involving the several ways to get to Jordan via Safed, all of which are either expensive or complex.  But Cyprus is a really good inadvertent!

I get a special feeling when I land in any country that is new to me.  For awhile at least, I have a bigger nose, wider eyes, better hearing and freedom from my own  expectations. The first thing I noticed after getting off the plane in Cyprus is that the sunlight is white and sparkling like stars. You can almost see through tangible objects.  The smell of the Mediterranean is soft and round compared to the salty earthy smells of the Pacific, and the road to town provides commercial-free views of a small mountain range and open spaces. 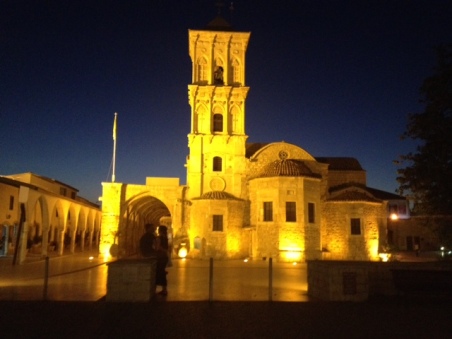 St. Lazarus’ church across from my hotel. Lazarus is believed to be entombed on the site. Built by the Byzantines, it is more than 1,000 years old.

My small hotel in middle brow Larnaca is perfectly situated two blocks from the waterfront,  nestled among rabbit warren streets lined with small cafes.   There is a garden and a small veranda overlooking the plaza that provides a view of the town’s landmark church. One catch. Room 103’s  most obvious feature, besides the eye-watering smell of bleach, is that it has no natural light.  I learned, upon inquiry, that I requested this room by saying “yes” on the reservation form when asked whether I wanted a quiet room. Upon further inquiry, I learned that the other rooms face the street and are therefore are noisy.

Noisy street during peak traffic period below the hotel rooms I didn’t request.

Like pretty much everywhere in this part of the world, Cyprus has been occupied by many, including the British, the Ottoman Empire and the Byzantines.  Today, the Island is divided into two jurisdictions following a military attack in 1974 by the Turkish government that was designed to reduce Greece’s political control of the island’s Turkish minority.  Since 1974, the north part of the island is part of Turkey and the Grecian south is an independent state.  The prospects for reunification are a constant source of political speculation internationally and among Cypriots. In the category of be careful what you ask for, the Turks want reunification and the Greeks just voted it down in a national referendum.

Tavli is a big deal here sistahs! But it’s played differently from Armenian tavli. The explanation I got was “We can’t explain it — we just play it!” 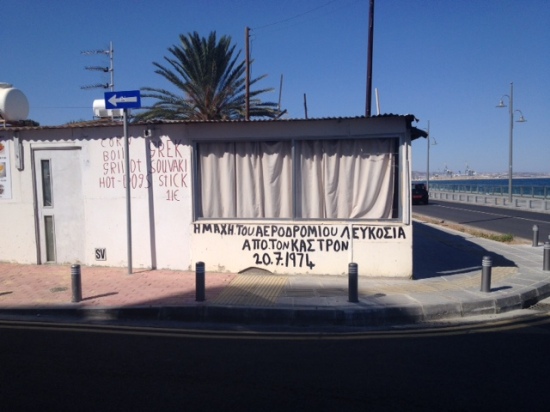 I am proud that my friend Janet can pronounce this even if she cannot translate it…something about the partitioning of the island in 1974.

Beach by my hotel 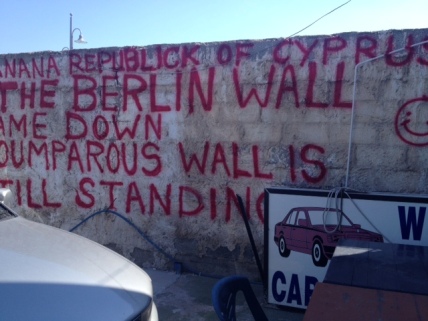 When I saw this wall,I assumed it referred to the Island’s dividedness. But the man who painted it explained it refers to the wall it is painted on, which was built by his neighbor and eliminated his ocean view. We discussed court proceedings.

The local economy is in bad shape as well, which is easy to see as soon as you get out of Larnaca’s city center. I spoke with Matthew at the bus stop who is returning to England because he lost his job here as an HVAC technician.  And Nikki who cut my hair today described the dramatic loss of tourist business where her salon is located near a string of modern beach resorts.

These brief conversations with locals remind me that I am still more of a tourist than a traveler. I am working on that but it is harder than I expected.

Chinese take out at the beach

“Whatever you do will be insignificant but it is very important that you do it.”