Quick stop over in the very cool city of Akko, Israel, a UNESCO World Heritage Site near the Lebanese border. I am so happy to be on the coast again!

Akko has a beautiful and lively Old City with sites that reflect its history of conquest and occupation by the Crusaders, the Ottoman Empire and the British, among others, including the Mamluks. The Mamluks were Muslim slaves whp somehow ended up with a lot of military power. They booted the Crusaders in the 13th century, sending many of Akkos’ Catholics to Cyprus.  Modern Akko is a peaceful town that is about 70% Jewish and 30% Muslim. 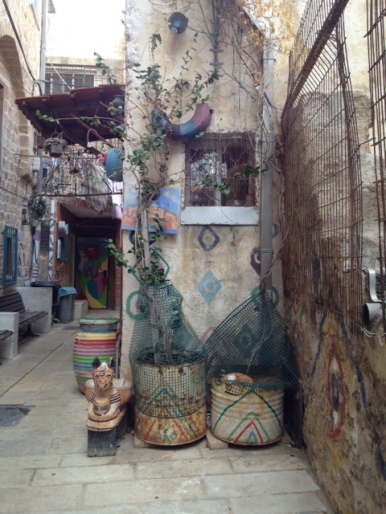 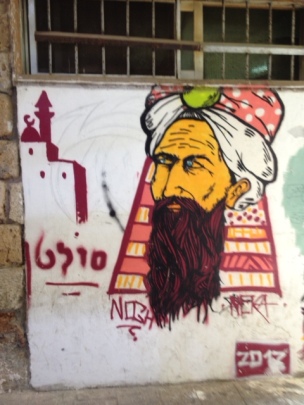 Today, I wandered through the Old City souks, explored the Templar’s tunnel and survived a terrifying ride on a tourist boat.

This photo is an Akko tourist boat but I didn’t take the picture. The swells were so high I was actually somewhat immobilzed.

Templar’s tunnel leading from the fortress to the port.

I made an exception to my no-selfies policy to show you where I had coffee this morning.

The parenthetical clarification should dispel any concerns that the Bobbies might show up 66 years later.

After my three days of culinary austerity in Safed, I have been rewarded with Akko’s wonderful food! The Arabic Old City has several cafes that are updating traditional dishes.  I spent a long time talking to Dlal and Miard, who own Dalal Tapas Cafe, about the political and economic environment for Israeli Arabs.  Miard is finishing her studies in Art History and English Literature (even though English is her third language!) Dlal made a point of telling me she is his inspiration.

An amazing lunch feast at Sovita. BBQ’d bonita on spicy baba ganoush with five salads, ceviche and a roasted sweet potato. This is only half of it! I took most of it to my hotel for dinner.

Sovita owner, Ohad, who closes the restaurant if the small local fisherman don’t have any morning catch. He won’t buy off a big ship or from outside Akko waters.

“Shukran” is thank you in Arabic and I am thankful.

Tomorrow I am following the path of the 13th Century Akko Catholics to Cyprus.