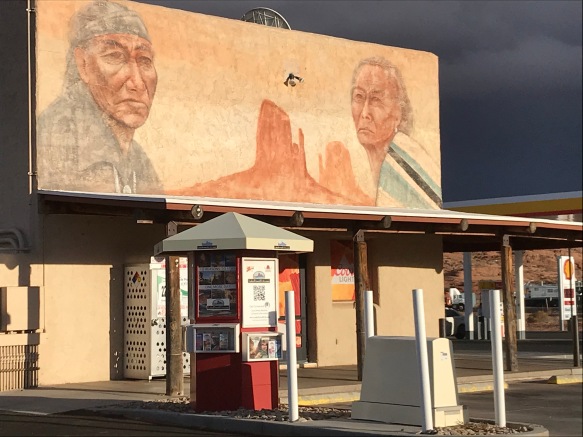 I left Sedona on Monday, headed for Louisiana. Slowly. I’d originally planned to make a bee-line for Louisiana through New Mexico and Texas, from big city to big city. I now know that would be silly. What’s the rush?! And I love cities but, during the pandemic, they’re mostly not going to be much fun. Museums are closed. No festivals or performances or tours. I’m not a shopper. And there’s so much to see that’s not cities!

So I’m taking a circuitous route to see whatever seems interesting. So far there’s been plenty of that, along with a few challenges… 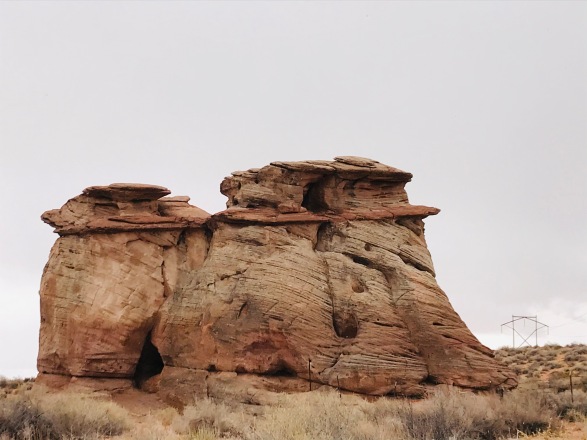 Kanab, Utah. Belle (remember Belle…I was staying with her in Cornville near Sedona…) joined me for the 250 mile drive north to Kanab. We went to Kanab to visit a 20,000 acre animal sanctuary north of town, operated by a nonprofit called “Best Friends.” Well, that turned out to provide one more reason to do your homework before you make a travel decision. On Tuesday, we did the tour of the sanctuary, which was surprisingly uninspired and provided almost no information about the animals or the organization’s programs. My subsequent independent research was much more informative, although not in a good way. Cripes, it seems Best Friends’ animal rescue operation is more about money than animals. To support 1,100 animals, it has a $100 million budget and $150 million in assets. Lots of big salaries and non-animal buildings and (reportedly) two private jets. No one seems to know what it takes to place an abused or abandoned animal at the sanctuary, although locals say it takes a five-figure donation. (Best Friends’ refers you to their website for information about the criteria for animals they accept, which information isn’t there). Other stuff. Anyway, I hope the animals are happy.

The animals at Best Friends sanctuary have this lovely welcome center on 20,000 acres and several lovely properties in downtown Kanab.

We liked Kanab. It’s low key with good food and coffee, lots of dramatic red rocks and canyons, friendly people (including two wonderful high school friends, Kerry and Bob, who had me over for dinner) and easy access to Zion and Bryce Canyon National Parks. In fact, our original plan was to go from Kanab to Bryce, but a snow storm was on the way, so we went back to…. 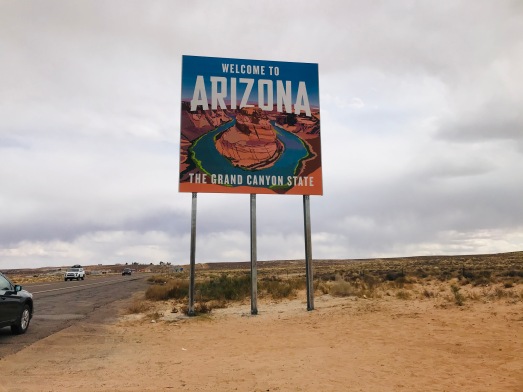 Page, Arizona.  Like Kanab, Page is a staging area for people on the way to the incredible natural wonders in Utah and Northern Arizona. I don’t expect you to remember, but I was there a month ago for my first Covid vaccination because, for some reason, Covid vaccinations are easy to get at the local Safeway. On Thursday, I returned to Safeway and got my second vaccination (yay!).

And we hiked. One of our hikes is officially one of my favorite hikes ever — Wire Pass Trail to Buckskin Gulch, in Escalante National Monument. The trail features incredible rock formations and slot canyons, 8 miles on a dirt road into wilderness but with bathrooms. 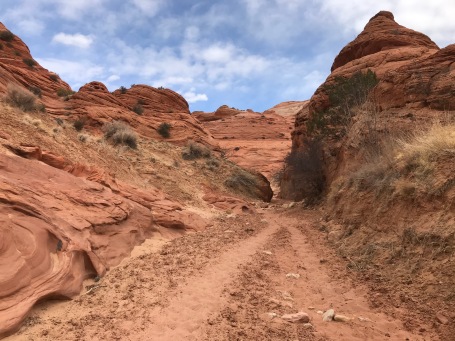 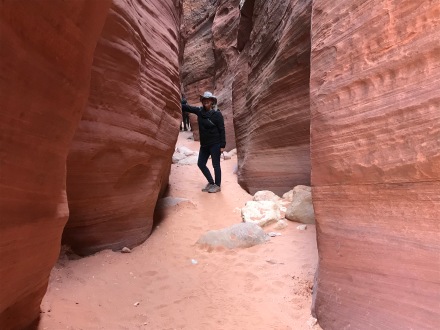 The trail has slot canyons, which are mysterious and not the place to be in a storm, since they are prone to serious flooding. 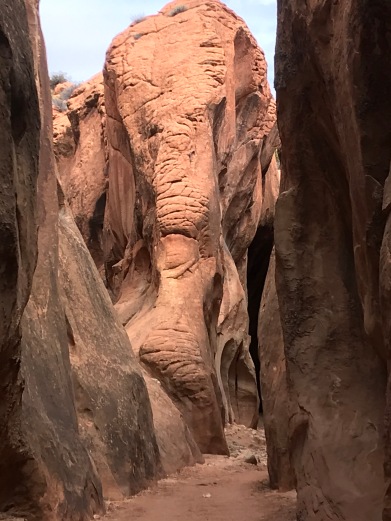 We also hiked a large area near the trail called Buck Tank Draw. I say “near” the trail because I got us on the wrong side of a mountain that is reportedly home to a lot of mountain lions. Belle suggested that the mountain lions were probably not very hungry because cattle graze nearby. Even so, it was a harder hike than we’d planned because most of it involved bushwhacking (the bushes were small and didn’t actually require whacking). Eventually, we found the trail! About five minutes later, it started snowing. Throughout, Belle never made me feel like a ditz, so I took this great photo of her in the rock hole.

Bluff, Utah. On Friday, Belle left for home and I headed back to Utah, hoping the weather would cooperate so I could see the Canyonlands and Arches National Park. But no. Another snow storm was on the way. So I am staying in the tiny town of Bluff for a couple of days. Worth the stop! The town, population 245, is nestled between huge red rock formations (bluffs 🙂 ), has two wonderful hotels, and a cafe that makes things like artichoke po’ boys. There is something about Bluff that feels loved and it’s close to some really interesting sites.

For example, it’s a 40 minute drive to an Anasazi ruin called “House on Fire” in Mule Canyon. In the morning light, it allegedly looks like this.

This morning, I headed out toward Mule Canyon to hike to the House on Fire. But arg again the weather. I only got far enough on the road to take a photo of “Barn in Snow.”

Happily, it wasn’t snowing at Goosenecks State Park. My visit there, however, throws into doubt a story I shared about Horseshoe Bend in Page, Arizona. I don’t expect you to remember that story, but you can remind yourself here if you like. https://kimmie53.com/2021/02/14/page-turner/#more-16620 Basically, I am no longer sure about where I woke up with my nose over a cliff when I was 20. Goosenecks State Park looks a lot like Horseshoe Bend! Not to mention it is breathtaking! 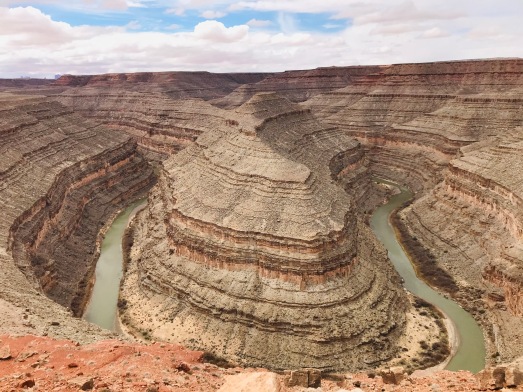 Anyway, I am loving all of this — the time with friends, the false starts, the feeling of being lost with mountain lions, the storms that give me surprise adventures, the reminders that my expert planning is sometimes useless.

Tomorrow — Farmington, New Mexico. Unless not! 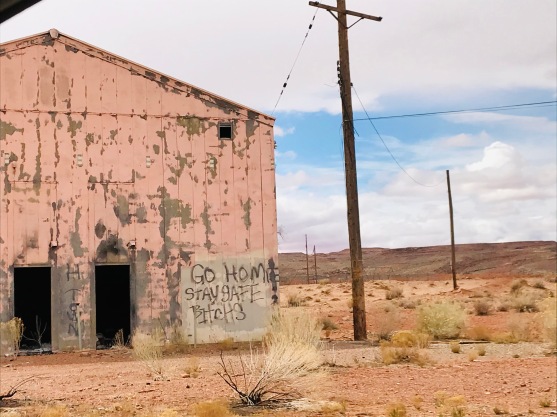 Welcome sign at the entrance to the Navajo village of Halchita.

Not I, not any one else can travel that road for you,
You must travel it for yourself.

It is not far, it is within reach,
Perhaps you have been on it since you were born and did not know,
Perhaps it is everywhere on water and on land.

—- Walt Whitman from “Song of Myself”