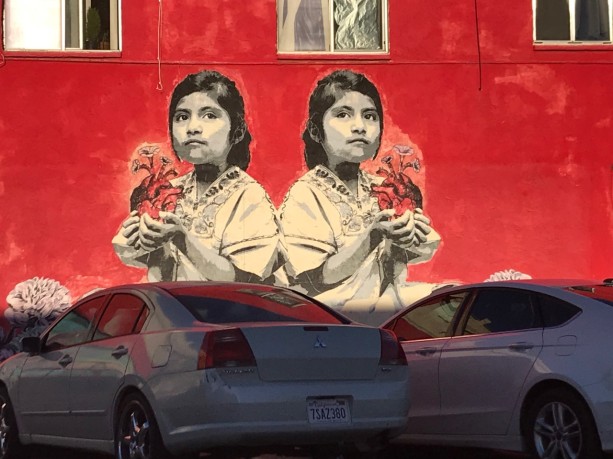 I left Santa Barbara on Thursday, heading for the places I’d lived as a child, not exactly intentionally but because those places were on my path anyway. My first stop was more of a drive-by. After buying gas in Pasadena, I made a 2-mile detour south to San Marino, where I lived as a teenager. Rich, conservative San Marino was an unlikely place for us, neither rich nor conservative, but we survived the John Birch Society, the cops who trolled the likes of us in Lacey Park, and being the only family without a gardener.

Like the rest of San Marino, my family’s house is mostly unchanged, right down to the chips in the brick path to the front door. The house is for sale — at a price that is 55 times what my parents paid for it 55 years ago.

Down the road in Glendora, I had a long-awaited, masked outdoor visit with Tom, Marilynn and Melinda, my uncle, aunt and cousin. Our two hours together was by far the longest in-person in-depth conversation I’ve had with anyone for almost a year. It was joyful and exhilarating to the point of exhausting. It seems our social skills require exercising just as our bodies do, and you can’t expect to easily run a half-marathon after ten months of brisk walks.

Foothills of the San Gabriel Mountains north of Claremont.

Following the half-marathon, I drove to Claremont, a small college town between Los Angeles and San Bernardino (tragically pronounced “San Berdino” a thousand times by Diane Keaton in her reading of Joan Didion’s classic, Slouching Toward Bethlehem). Claremont has street names like Yale and Harvard, a lot of classic California architecture, and coffee houses on tree-lined streets. I stayed downtown in a wonderful hotel called Casa 425, ate Thai take-out, and hiked through Claremont’s wilderness area, north of town.

But mainly, I was in Claremont to visit more family — the kind who have traveled to another dimension.

By the time I arrived at Oak Park Cemetery, I’d had plenty of time on the road to think about the things I should have done but didn’t do when my parents were living. That’s what solo travel does to you — your mind wanders to what it knows but has learned to avoid. One troubling memory leads to another and you find yourself skipping through every hopeful and happy song on your playlist until you are hearing nothing at all.  You know that if you want to reengage your self-respect, you have to let those thoughts consume you and then leave you. You will do better. You expect your own son will have the same thoughts someday and you forgive him in advance, as you believe your parents did.

I left a copy of A Country Within with my dad, who also wrote books, and whose Armenian refugee father inspired me to write about the refugees I met and loved in Greece. Sister Laura asked me to leave him a dime, and I did, a reminder of an old joke between my dad and cousin Donnie.  At sister Kathy’s request, I left my mother with pennies for her thoughts, which were unexpectedly wise and expectedly loving and sometimes delightfully sardonic.

Again exhausted — this time from the conversation with myself — I left Claremont. I had planned to stay in Palm Springs because I’d oddly never been there, and because it’s close to Joshua Tree National Park. Palm Springs was what I’d expected, a sprawling and unapologetic asylum of conspicuous consumption in a place of extraordinary natural beauty. I ended up not staying there  because my overpriced hotel room smelled like a chemical soup, and its manager was kind enough to relieve me of my commitment. Before I left, I learned that the Cuhuilla Indian tribe, which owns most of the land around Palm Springs, has created, among other things, a gorgeous regional park that’s open to the public. I hiked for several miles through a Cuhuilla canyon oasis of palm trees and then drove 30 miles south to Coachella. 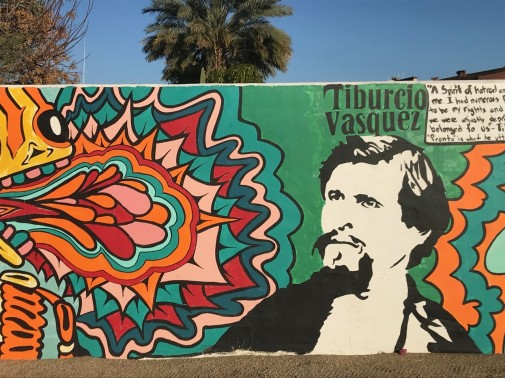 Coachella is the Un-Palm Springs, struggling and wind-seared and no where leafy. More than 90% of its residents are Spanish speakers. These days, most people know Coachella because it’s the name of an annual music festival held outside of town. Coachella is also known but less known for its homegrown murals, depicting the Mexican-American community’s culture and history.

I found the murals in Coachella’s all-but-abandoned pueblo viejo and they are indeed beautiful and inspiring, recounting the stories that connect the US and Mexico, and celebrating Mexican heroes of all kinds. Seeing them made me feel full inside. 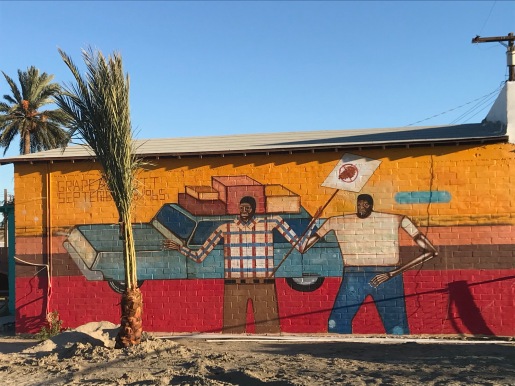 So far, this trip is the right thing for me.

A few thoughts about travel during the pandemic:  I want to stress that I am a big fan of Dr. Fauci and the experts, who recommend that we not travel during this time. It is relevant (to me at least) that I’m somewhat differently situated from most Americans in that I didn’t have a home when all of this started, that I don’t live with family or friends, and that routine makes me break out in hives. More relevant, the way I am traveling is probably as safe as not traveling. Here are my rules:

Do my rules make this kind of travel ok? I don’t know what Dr. Fauci would say, but I am heading east.