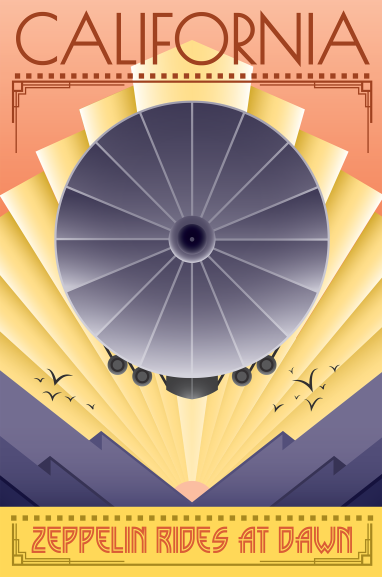 Posters are everybody’s art. They gained popularity in the mid-19th century and took off by the end of the 19th century. They announce events, advertise products, or provide information about matters of public interest. The most familiar are those that were designed to advertise absinthe or draw you into a cafe or encourage you to support the war effort.

Some go a little further to tell important stories, envision the future, or present exceptional artistry. Some of the best examples I found all happen to be a part of California history. Except one.

In 1911, California became one of the first states in the US to grant women the right to vote, nine years before the passage of the 19th Amendment to the US Constitution. (And remember, only men had the power to make that decision so all the more hopeful….) As part of the campaign for women’s suffrage in California, Bertha Margaret Boye was commissioned to design a poster. Her art deco creation features the sun setting behind the Golden Gate Bridge as a backdrop for a robed suffragist. 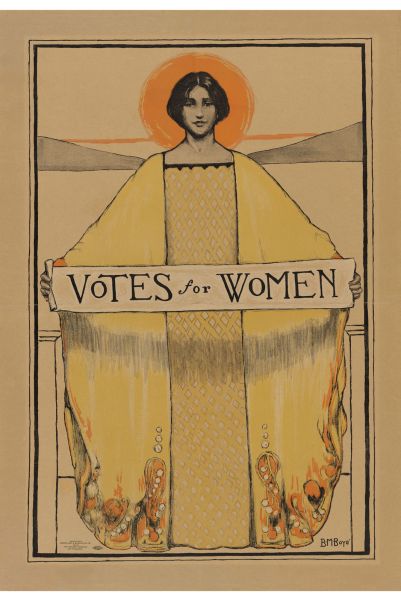 The poster was wildly popular in 1911, and was reprinted in 2011 by the State of California to celebrate the 100th anniversary of women’s’ right to vote.  I just ordered one for $5.99! https://www.sos.ca.gov/elections/celebrating-womens-suffrage/california-women-suffrage-centennial/

California has been a leader in scientific research and development related to the exploration of space. Interest in space travel has peaked in recent years so, in 2015, the Jet Propulsion Laboratory at the California Institute of Technology commissioned a firm to design posters about tourism in space. All 12 are wonderful, but the one that really stands out for its artistry and relatability envisions a future where any of us can visit Mars to visit “historic sites.” 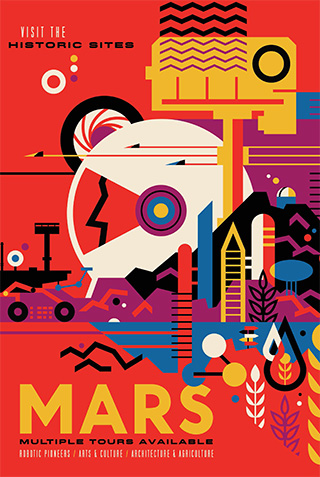 The style of the poster is something between cubist and art deco. I think.  It’s bold in composition and in message.

Even bureaucracies can dream.

“Wanted by the FBI,” US Federal Bureau of Investigation

In 1970, a 17-year old shot and killed four people in a Marin County Courthouse during a failed attempt to take hostages as leverage for the release of several inmates at Soledad Prison. The young man used a gun that was registered in the name of Angela Davis, a professor at UCLA. After learning that the FBI planned to charge her with murder, Davis went into hiding. She was added to the FBI’s most wanted list. A few months later, Davis was captured and jailed.

During that time, a lot of artists designed Angela posters that were very popular, but the most popular was the FBI’s, which Americans bought in large numbers at head shops. 😅 😂 🤣 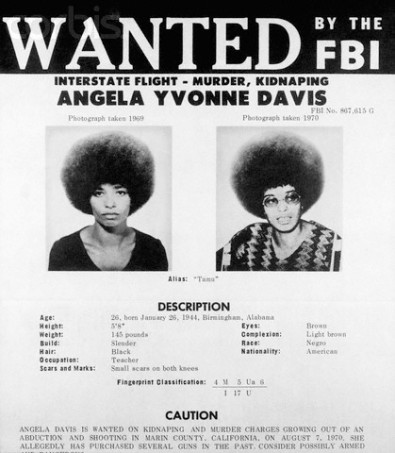 Two years after her capture, Davis was exonerated by an all-white jury. Since her release in 1972, Davis ran for vice president as a communist, taught at California universities, and dedicated herself to abolishing the prison-industrial complex and mass incarceration.  https://www.washingtonpost.com/lifestyle/style/legendary-activist-angela-davis-has-overcome-doubters-her-whole-life–and-at-75-shes-still-not-backing-down/2019/02/26/87ffd4c0-3392-11e9-af5b-b51b7ff322e9_story.html

When asked whether she is still a communist, she replied, “I believe capitalism is the most dangerous kind of future we can imagine.”

In 1915, the City of San Francisco hosted the Panama-Pacific International Exposition to celebrate the city’s recovery from the fire and earthquake that devastated the city in 1906. The exposition also celebrated the opening of the Panama Canal, which would change California’s relationship to the world.

The organizers of the exposition commissioned Perham Nahl to design the event’s official poster. Nahl’s incredible art deco design builds on the myth of Roman god Hercules’ Twelve Labors, which included such miracles as slaying the nine-headed serpent called the Lernean Hydra. For his poster, Nahl imagines a 13th labor — Hercules parting the cliffs between the oceans to create a navigable canal. On the far side of the cliffs, we see San Francisco. 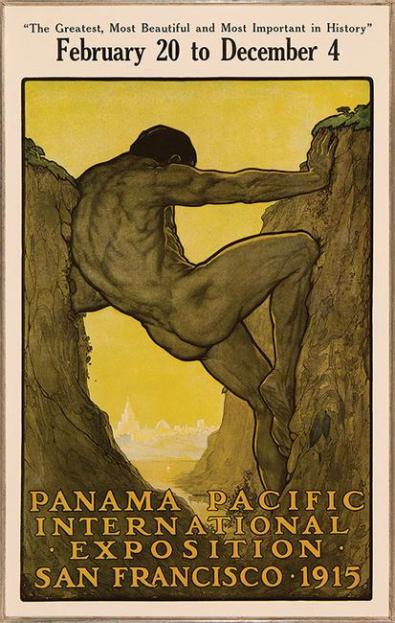 The City of San Francisco created a virtual city for the exhibition, most of which is gone. But we still have Bernard Maybeck’s incredibly beautiful Palace of Fine Arts. And we still have this really cool poster.

During the Depression of the 1930s, President Roosevelt created the WPA to employ people in public works projects, like building bridges and roads. The WPA also engaged artists of all kinds, and left us with a lot of treasures in the fine arts, literature and popular art forms, including 35,000 poster designs. Of those 35,000, 14 depict the country’s national parks.

The WPA posters of the national parks were designed and produced at UC Berkeley. The 1400 silkscreened posters made there were distributed mostly to park rangers. The art work in each poster is iconic and very typical of WPA designs.

By now, most of the originals created at UC Berkeley have been lost. In trying to recover these historic art works, collectors have found some in drawers, in pieces, and once in a truck on the way to the dump. 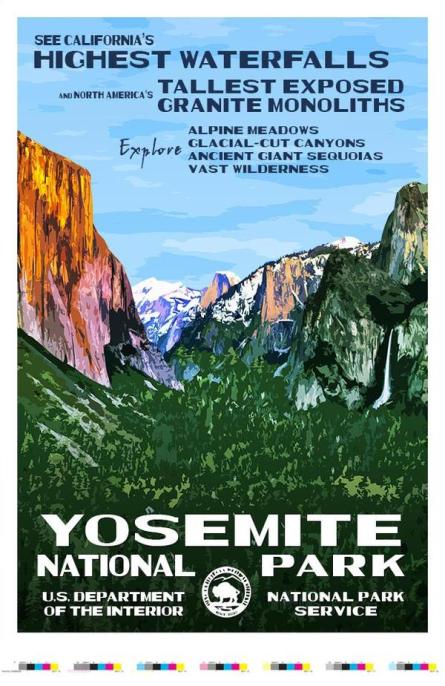 Only a single original is known of the poster of Yosemite National Park. Unfortunately, it belongs to an anonymous collector who bought it from an auction house in 2006 who doesn’t appear eager to share. US Park Ranger, Doug Leen, has been tracking down the WPA posters for years and is offering a $5,000 reward for one of the Yosemite originals.

So be sure to check that bulge in the wallpaper of your Wawona Hotel room next time you visit.

In 1965, Cesar Chavez organized a strike of Mexican-American farmworkers in California. He also launched a consumer boycott of grapes as part of the fight for better wages and working conditions.https://ufw.org/1965-1970-delano-grape-strike-boycott/

The boycott preceded the internet, and Chavez needed creative ways to get the word out to the nation’s consumers, so he distributed thousands of posters in all 50 states.  Among the most compelling was one by Xavier Viramontes, showing an Aztec warrior squeezing the blood out of bunches of grapes. 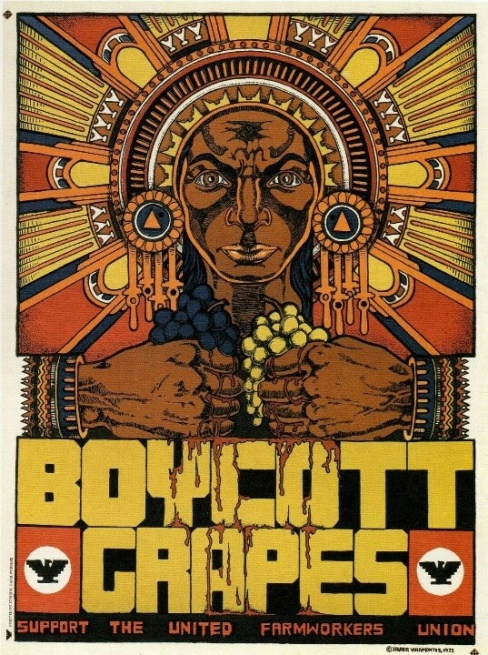 Viramontes was right when he said, “For making political statements, one can never underestimate the powers of a poster. A strong, well-executed image with a few chosen words can make a great impact and can outlive the memories of past rallies or political marches.” The posters motivated more than 17 million Americans to boycott grapes. The success of the boycott is attributed to Chavez’ charisma, and also the posters. http://amadeusmag.com/blog/viva-la-huelga-art-united-farm-workers/

You can’t talk about the posters of California history without including the psychedelic posters created for San Francisco’s Fillmore Auditorium, where almost every important musician played in the 1960s and 70s. Jefferson Airplane, the Grateful Dead, Jimi Hendrix, the Doors. I saw Miles Davis there in 1971. I don’t remember much….

Wes Wilson was one of the artists who designed posters for the Fillmore. He created the style of lettering that is so strongly associated with rock concert posters of the time. When Wilson took his first poster to Fillmore owner, Bill Graham, Graham commented that he couldn’t read it,”  Wilson responded, “Yeah, and that’s why people are gonna stop and look at it.” Wilson later wrote, “The point of psychedelia was that nobody could read it — unless you were part of the ‘tribe.” https://www.collectorsweekly.com/articles/psychedelic-poster-pioneer-wes-wilson/ 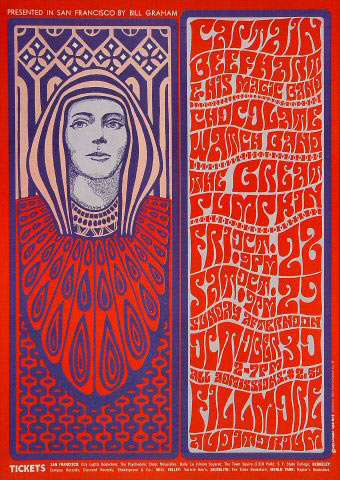 Wilson often used design motifs from the Art Nouveau period, especially the style of Viennese artists — like Gustav Klimt — and their portrayals of women to suggest the spirit of the earth. The Captain Beefheart poster is typical Wes Wilson.

I wanted to end by sharing a poster made by the State of California during this pandemic. Doesn’t it make sense that public health officials would want to make public health seem cool?

Alas, there is nothing you would ever want to put on your wall. Or look at. Huh?

So I found this, which looks like something State of California might have designed for its own campaign. 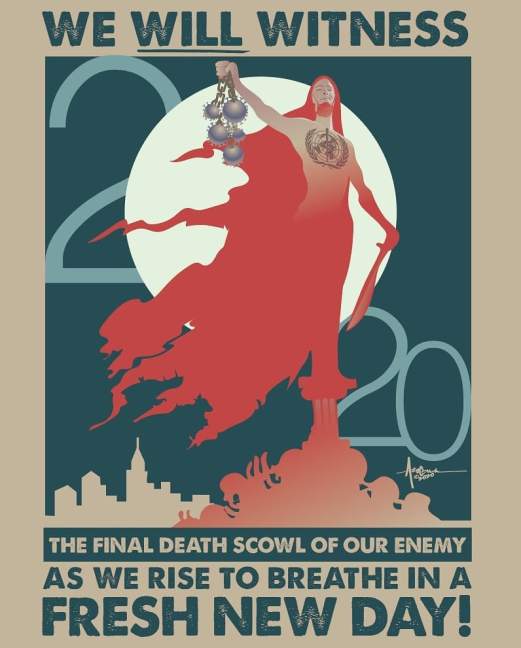