I understand why so many people are angry. I am angry. Over the years, I have had numerous explicitly racist encounters with police from the Bay Area cities of Oakland, Berkeley and Piedmont. I know my black son has had many more, and his are dangerous. I have worried about him every day of his life since he was old enough to walk down the street by himself. It’s all so painful and personal, it’s hard to even think about it.

And yet, I believe police officers should not be the main target of our anger. That’s because they are not the main cause of America’s police brutality problem. If we were to hold every police officer accountable for every act of racism and unjustified violence — and we should —  we would still have racist policing and police brutality. That’s because the problem is not “bad apples.” Circumstances and government policy have converged to create a policing culture that promotes racism and violence.

Here are a few of those circumstances and government policies:

Social Context:  For 400 years, Americans have lived according to a mythology that has criminalized and de-humanized black men. For the past 40 years, Ronald Reagan and his political progeny have systematically pursued a culture of exclusion and inequality that has found its (hopefully) ultimate expression in a president who casually refers to Mexicans as rapists and Muslims as terrorists. https://www.newyorker.com/news/our-columnists/how-do-we-change-america. High levels of poverty and feelings of disenfranchisement have created conditions that have made policing more difficult and promote racial discrimination. And, well, people do take their cues from their leaders. 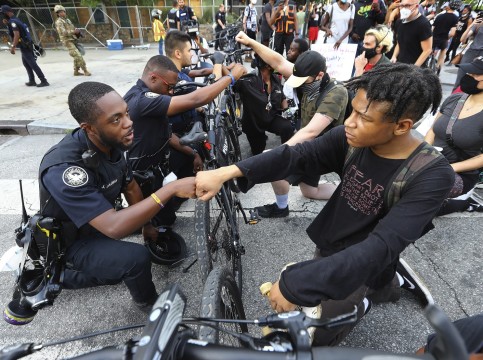 Militarization of Policing: Most of us don’t think of police as “peace officers” any more. You know, like Andy of Mayberry. Increasingly, police are tough guys with guns and giant SUVs who are going to get bad guys. They show up at peaceful demonstrations in regalia that would be overkill on a battlefield. In the past 20 years, the federal government has been arming local police departments with weapons of war, so far transferring $7 billion in military equipment to them, including automatic weapons, grenade launchers and mine-resistant vehicles. https://www.wired.com/story/pentagon-hand-me-downs-militarize-police-1033-program/ When people — like our police — get the message they are fighting a war, they are going to behave like warriors.

The Militarization of Civilians: Guns in the United States outnumber people. Forty percent of Americans own guns and some of them are not stable people. Of course, the police know this, which reaffirms the direct and indirect messages they get that they are fighting a war. https://www.bbc.com/news/world-us-canada-41488081

The Trauma of Modern Policing — When people believe they are fighting a war against a certain class of people, and know that anyone they encounter could have a loaded gun, they are probably going to develop some hair trigger responses. On top of that, police officers are stressed out from the things they see everyday. Daily exposure to violence and human pain and fear has got to cause some version of PTSD. And, unlike people who fight in wars, police officers face a 30-year tour of duty. Police officers commit suicide in larger numbers than people in any other profession, and a police officer is 3 times more likely to die from suicide than from a policing incident. https://www.addictioncenter.com/news/2019/09/police-at-highest-risk-for-suicide-than-any-profession/ 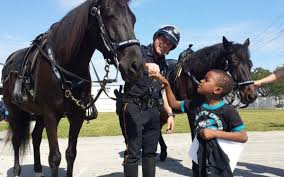 Police Training and Recruitment. The part of the brain that governs good decision-making doesn’t typically get it together before the age of 25. And yet, in the United States, many jurisdictions accept 18-year-old police recruits. https://www.policeone.com/career-advice/articles/how-to-become-a-police-officer-in-california-SoJ6WrB3wAi3JzV7/ Recruits typically get only 5 months of training before they are handed a gun. https://work.chron.com/long-train-cop-21366.html (In Europe, police training is 3 years). And a lot of the training is less about ways to promote peace and more about ways recruits can protect themselves in the war they are going to fight. https://www.washingtonpost.com/world/2020/06/06/guns-neck-restraint-how-police-tactics-differ-around-world/ 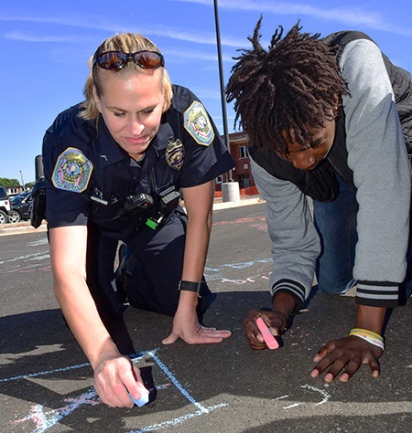 Police Unions. Unions have important functions in a capitalist economy but have become a huge liability in policing. Police unions have shielded individual officers from accountability, and have spent millions paying off politicians and fighting reforms that could be good for policing and communities. https://www.nytimes.com/2020/06/06/us/police-unions-minneapolis-kroll.html

With this as the backdrop for policing, we should expect brutality.

So what should we do? Rules about chokeholds and no-knock entry may save a few lives but neither of these are involved in most deaths caused by police.

Seems other things are more important if we expect meaningful change:

If we are committed to social justice and policing reforms, we need to push our leaders at every level of government to pursue these kinds of changes. Their current proposals are mostly symbolic. The legislation passed by the House this week would stop the flow of military equipment to an already-militarized police force. It makes individual officers liable for law suits, which is fine if the goal is accountability after the damage is done, but not much if the goal is eliminating the violence caused by a racist, stress-inducing system.

Like most people, police officers probably want to do their jobs according to what they believe is expected of them. They probably don’t want to be on the other side of distrust and rage. They probably don’t want to feel distrust and rage. Police officers would probably benefit from reforms as much as the rest of us would. They are humans who deserve understanding so we can walk together toward solving problems.

Maybe we should consider what civil rights leader, john a. powell, calls “bridging”:

“,,,bridging is ‘yes, the world is changing.’ We are changing as a culture, as a people, but it’s good. We’ve always been changing…We’re learning. Developing… bridging requires a human connection… it doesn’t mean you have to abandon your position. But it means you listen to the other person. You engage them. You give them the benefit of the doubt. And you acknowledge their humanity.”

I don’t want retaliation or small band aids on large wounds. I want the war to end.