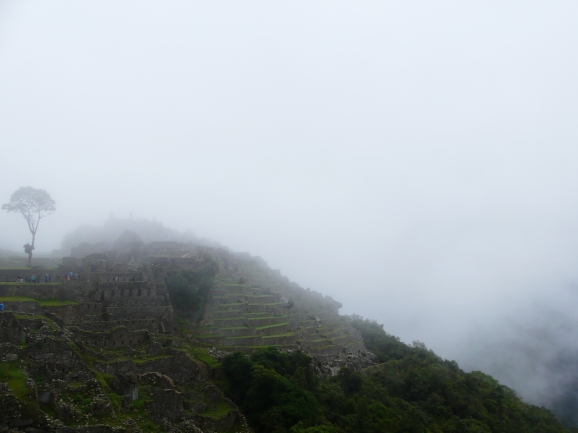 Although a visit to Machu Picchu is at the top of many bucket lists, I never planned to visit.  It’s too high! But I went to Machu Picchu anyway and learned that no one ever exaggerated either its magnificence or the challenges it presents to people who are afraid of heights.

Machu Picchu is the miraculous citadel of the Incan Empire. Built in the 15th century high in the Andes, the Incans abandoned it some time after the Spanish conquered them. Machu Picchu was “found” in 1911 by a British archaeologist, Hiram Bingham III. (Actually, a small community of Peruvians lived there when it was “discovered,” but some white people think it only counts if white people find something.).

Some of the stones used to build the site weigh as much as 50 tons and were hauled up the mountain and chiseled into perfectly engineered walls — without the benefit of the wheel or iron tools.

Our journey to the site began with a train ride from Cusco that wound through the Peruvian countryside and a narrow gorge to the small town of Aguas Calientes, nestled at the base of Machu Picchu’s mountain along the Urumbamba River.

View of Aguas Calientes from the front of our hotel.

The view of the Urumbamba River from the window of my hotel room.

At 5:30 the next morning, we left for the site.  The bus ride was, as expected, crazy scary! The buses are nice enough but the one-lane road is unpaved and very steep with lots of switchbacks. The road has no guardrails and plenty of 1,000 foot drops. When another bus was coming down the hill, our bus made room by backing down the muddy road. Each time this happened, I put my head between my legs and moaned. Each time I did that, the nice young man sitting next to me giggled. He said no bus at Machu Picchu had ever gone over a cliff, as far as he knew.

A photo of the bus ride to Machu Picchu that someone else took. I didn’t take any photos because I was closing my eyes.

Anyway, I survived the bus ride up and was super excited to be there!  I expected a lot of drama — giant expanses of granite ruins over hundreds of acres on the top of the Peruvian world. The drama was there alright but I had to imagine some of it because the whole mountain was enshrouded in fog. Visibility was further impeded by the fact that it was raining and the $3 rain poncho I bought would only keep my head dry if I allowed it to fall over my eyes. 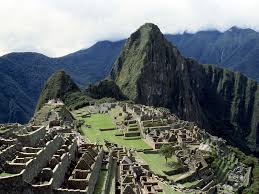 This is a photo someone else took of the most famous part of Machu Picchu when it wasn’t enshrouded in fog. 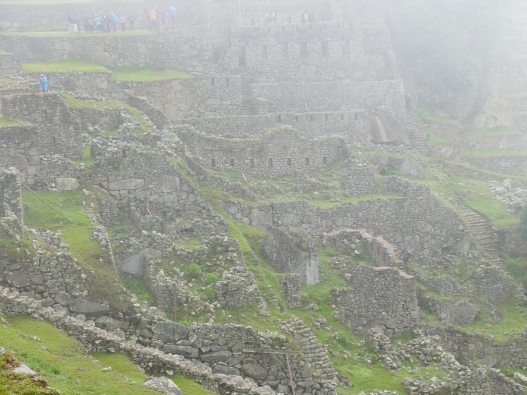 This is a photo I took of part of the famous area.

For some reason, I decided not to hire a guide for my Machu Picchu visit, which is probably why I decided to hike to the Sun Temple. I got within a quarter of a mile of it and turned around because the people coming down the trail said they couldn’t see the Sun Temple through the fog. In a way, this was a huge relief to me because it gave me an excuse to avoid further navigation along the slippery trail with the sheer drop on one side and the sheer cliff on the other.

The trail of sheer cliffs on the way to the Sun Temple.

There was no guide to prepare me for my second hike either, which was to Inca Bridge. Actually, almost to Inca Bridge. I turned around about 100 meters from the site when I saw how scary the trail was going to be. Another sheer drop but this time without the benefit of other hikers to save me.

The trail of sheer cliffs in the last quarter mile to Inca Bridge.

The view of Inca Bridge from where I turned around.

But don’t let my experience deter you. Hire a guide and go during the dry season. If the hiking trails sound too scary for you, you can skip Sun Temple and Inca Bridge, and go to the part that everyone else goes to. If the bus ride sounds too scary for you, you can hike to and from the site on a very strenuous path.  I took that path on the way down instead of getting back on the bus for a total of 9 miles of hiking up and down the mountain. I have been limping and popping ibuprofen ever since.  Totally worth it! 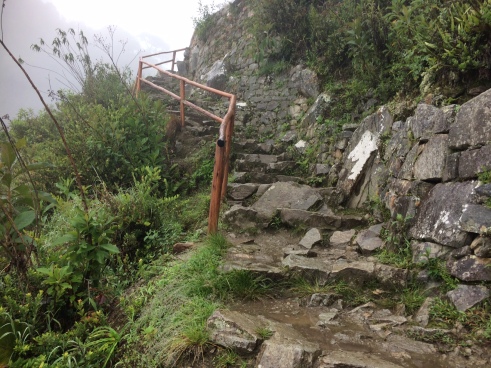 My Machu Picchu hike — like 5 hours on the Stairmaster.