Bogota, Colombia, is like so many of the world’s big cities — crowded, bogged down by traffic, leafy neighborhoods and the desperately poor, an interesting old town and, increasingly, a vibrant bar and cafe scene.  Lots of music, trees and churches. Bogota is also one of the most painted cities I have ever visited.  Art is everywhere.

I know I have been focused on this theme a lot lately but that’s because graffiti is such a big thing in Colombian cities. Here, graffiti is not a crime. The law identifies it as a “cultural act.” As long as you are painting something with the owner’s permission, you can paint whatever you want. And if you are painting without permission, you can probably get away with it or, at worst, pay a $100 fine. Here are some of my favorite examples from the historic neighborhood of La Candelaria.

This graffiti was painted as part of an international competition, which required teams of three artists. When one team couldn’t find a 3rd member, they recruited one of the dads, a well-known artist named Rodiz. Since finishing this project, Rodiz has dedicated himself full-time to graffiti art.

Local businesses have figured out that graffiti attracts attention and therefore customers, so many have recruited well-known artists. The two restaurants below are among the most popular in Bogota.

The photo below is part of a dramatic, block-long depiction of how corporate pillaging, government corruption and consumerism have affected the environment and people who are not among the elite. It also includes references to the billions the US provided Colombia in weapons, which put pressure on the Colombian military to show results. Called “false positives,” the military killed poor and mentally-impaired citizens and dressed them as guerrillas. The US continues to criticize Colombia for its drug industry while it continues to be Colombia’s biggest customer.  Chiquita Banana, a US company, is being investigated for funding right-wing terrorism. Among the non-elite in Colombia, the US is not very popular. Less popular than ever actually. 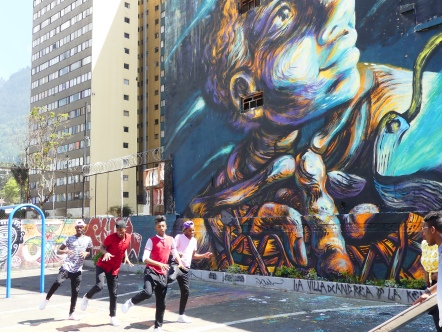 We were fortunate to see a wonderful performance of local dancers under a dramatic painting.

Bogota’s altitude of almost 8,000 feet has provided me with another kind of memory. Being a wimp from the coast, I was taking a drug for altitude sickness called Diamox. On our first day in town, I felt tingling in my hands and feet. Since this was an unfamiliar sensation, I checked the drug websites, which said if you are taking Diamox and you feel tingling in your hands or feet, you should SEEK IMMEDIATE MEDICAL ATTENTION. Oh geez. I felt fine and I wanted to go on our walking tour. But I hopped a cab to Clinica Marly, a small local hospital where I learned I should not take Diamox. I mention all of this because my experience with the health care system here was so good. The clinic was modern and immaculate. The staff were friendly and professional. The English-speaking doctor, who introduced himself as “Carlos,” explained why the drug was making me tingle. Three patients made a point to help me with language issues at triage, with the nurse and then at the cashier.  And speaking of the cashier, the cost to a gringo for a visit to the emergency room was less than $50.

And look who I found in Bogota — Fred Spielberg, a classmate from my graduate program at UC Berkeley’s policy school.  Fred was the class intellectual with a freakish amount of knowledge about music. He has lived in Bogota for several years. Since the last time I saw him in 1982, Fred has worked on three continents for the UN, Oxfam and Unicef.  He is truly a man of the world and a lot of fun. 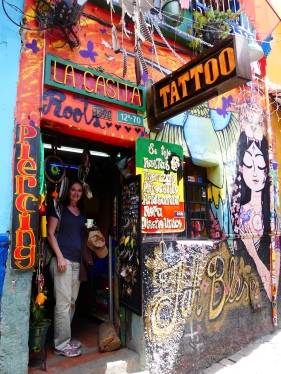 Dani didn’t get a tattoo although we did discuss it….

A few random but significant observations….Colombians are super friendly and, in addition to the usual benefits of being around friendly people, that makes it fun to try to speak Spanish.  The food here is amazing, even for a vegetarian. Also, if you tip a taxi driver a dollar, he will love you forever. And finally, Bogotans love dogs, especially Yorkies, German short-hair pointers and French bull dogs.

I am already planning my return trip to Colombia.