Greece is a place of great history, gorgeous islands and rustic countryside.  It is the magic of the Acropolis, Delphi, Santorini, Crete and a thousand other Greek places with antiquities, hillsides of olive trees, ouzo, moussaka and dancing like Zorba on a sandy beach.

For a good chunk of the past 18 months, I have lived a little like a local in Athens and on the Greek island of Lesvos. During that time, I have learned a few things about Greece I haven’t read in the tour books.  Of course, these are generalizations that don’t apply to everyone but you know….

Greeks are transcendent.  The Greek economy is a hot mess. Greek taxes are among the highest in Europe and Greek public services are among the worst.  Old people have lost their pensions and young people can’t get jobs. In Athens, local residents are going through garbage bins, standing in food lines and sleeping in doorways.  And yet the feeling is not one of bitterness but rather kindness and intellectual curiosity.  The Greeks I have met are warm and patient and really into their families.  Instead of complaining about crumbling infrastructure or the overflowing garbage bins, Greeks talk about big ideas, even in the most casual conversations.  One taxi driver told me the difference between a muse and a goddess.

Another described the contemporary relevance of Nina Simone’s music.  One of my Airbnb hosts — who is employed as a civil engineer — is writing a book about Cleopatra’s son, Caesarion.  Another described the difference between the Greek value of “philotimo” and the more political concept of “solidarity.”   Ok, maybe the Greeks are kind of stuck in one of three other millennia, but they understand the kind of wealth that is inside them.

Greece is not a management culture.   The Greeks I have met are philosophical, generous and good-natured. And they seem to have no concept of efficiency or business sense.  I can almost never buy anything from a Greek who doesn’t give me a discount I didn’t ask for. (Hey, I am a tourist, not your neighbor!). You gotta look hard for a restaurant that prepares something besides the usual menu of moussaka, souvlaki, and spinach pies.  Government procedures for the simplest of tasks are ridiculously bureaucratic.  It took four officers in a Greek police station half an hour to tell me what I had already told them — that  I had 15 days before my visa would expire. I once waited at a post office for more than two hours to pick up a package. When I asked a young woman next to me in line how people can afford to sit in a post office all day, she said “They are Greeks. This is what we do.”

Sometimes I think the Greeks should put up a Justin Bieber poster or talk about the Game of Thrones.

Athens is dangerous (but not the way you might think).  In my travels to 43 countries, I have never felt in constant fear for my safety — except in Athens.  I am not talking about crime.  I am talking about accident hazards.  The sidewalks in Athens seem to have been designed to bring down the insurance companies. They are slippery even when dry, which is almost never because, if it’s not raining, air conditioners are leaking condensation on them.  On top of that, sidewalks are treated variously as parking lots, storage lockers, and cat boxes.  Wear your hiking boots.  And another thing — for reasons no one has been able to explain to me, Greeks lock their apartment building doors from the inside at night.  Is this so thieves who broke in before 11pm can’t get out with the goods if they wait to leave until after 11pm? Remember to grab your keys and the oven mitts if the building is on fire.  And finally — a common feature of almost every apartment building is the veranda railing that, to an active two-year old, looks like a jungle gym and perfect for climbing over or through. Tie up your two year old. 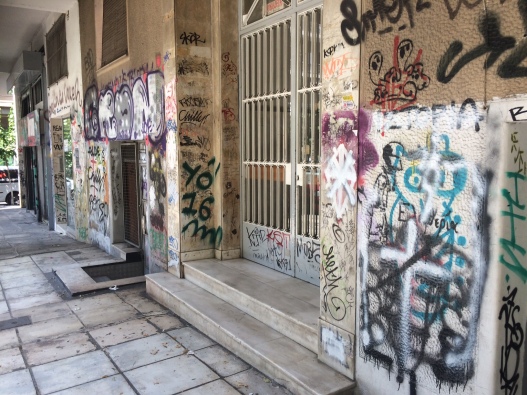 A typical sidewalk in Athens.

All of this makes me alternatively frustrated with the Greeks and admiring of them. Every time I leave Greece, I think I will never go back.  And then I do.

Since we cannot change reality, let us change the eyes which see reality.