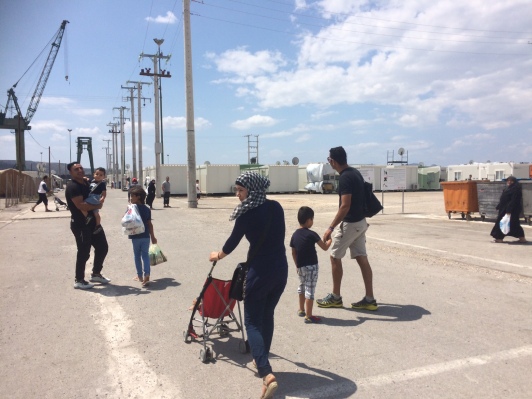 Skaramangas sits on a flat expanse of asphalt along the restless sea in what feels like the middle of nowhere.  There are no trees, no gathering places, no where to hide from the searing heat of summer except inside one of the 10 x 20 foot caravans called “housing” by the Greek authorities.  The caravans are air conditioned, which is some consolation for the 8 people crammed into each.  But that’s about it for the consolations.

Imagine making a meal for 8 people on a single burner standing butt up against your children’s bunk beds while two toddlers are crying inexplicably.  You eat on the floor (grateful that you are no longer standing in long lines for plastic plates of cold macaroni). Shopping for food was an all-day ordeal because you are living miles from anything and the first bus that arrived was jam packed before you could get on.  Nineteen year old men with nothing but cell phones are faster than you with your three kids so you waited in the deafening drone of the highway for the second bus.

You know the indignity of being told that you are lucky to have a job picking up other people’s garbage when people need your dentistry skills. You swallowed your pride when a 20 year old volunteer told you to wait in line a second time for a pair of used shoes. You know the same kind of people who once respected you now think you are dirty and suspicious.  You wonder whether the Greek government will ever release you from this misery but you are unable to contact anyone who knows anything. You know the NGO employees are well-meaning but they don’t seem to understand that you need a fishing pole, not more fish. Or flat bread actually. 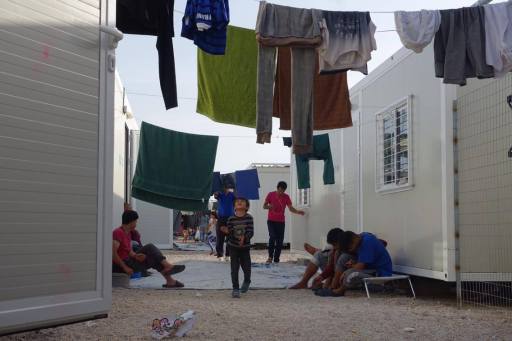 You never have a moment of privacy or quiet, and you struggle to retain the part of you that is more than just eating and sleeping — the person who played the tamboor and wrote poetry and knows world history.

The best part of your day is when the breeze comes up as the sun goes down.  You put the little ones in a cheap stroller to join your neighbors for a walk along the water.  A few enterprising residents have set up “shops” there where you can buy cigarettes and vegetables and sandwiches. You don’t know where you will get the money for cigarettes next week but smoking is your only indulgence so you will find a way.  Sometimes there is music and dancing but the sea still reminds you of a day when you believed you would die. The pathway you walk along drops precipitously into the white caps and you know it is only a matter of time before a child is lost forever because an exhausted parent was momentarily distracted.

Last week, a big fight broke out.  The police at the gate wouldn’t come to break it up. Some said the fight broke out because of the longstanding antagonisms between Yazidis and Muslims. You know the fight was caused by a feeling of hopelessness.  You also know that the feeling of hopelessness will eventually lead some of the young men to join extremists who promise dignity and a sense of purpose. You have learned that Europe offers neither.