London is a treasure chest of art and antiquities from every time and place.  I had three days to enjoy it and visited six of London’s best museums.  To avoid being overwhelmed, I limited what I saw to specific works or exhibits in each museum.  A few things stood out.

“Botticelli Reimagined” at the Victoria and Albert

I mostly loved a special exhibit at the Victoria and Albert (the “V&A”) that explored how Botticelli — the 15th Century Italian painter —  influenced art in the subsequent 500 years.  You probably know Botticelli’s most famous painting, the “Birth of Venus,” which hangs in the Uffizi in Florence:

The V&A exhibit featured a wide range of paintings and posters that referred to Botticelli’s works — from pop art to some of the most sublime paintings in western history. I got the feeling that the curators picked anything that was evocative of Botticelli, even if it wasn’t good art.  Or art. Like a photo of Ursula Andress on the beach from the James Bond movie, “Dr.No.” And a cartoon of Miss Kitty. Meow.

The curators put the recent stuff in the first room, probably because if they had organized the exhibit chronologically, visitors would have left the exhibit with no appetite for lunch in the museum cafe.

But most of the other works more than made up for the awkwardness of parts of the exhibit.

“La Source” painted around 1820 by Jean Auguste Dominique Ingres, a loving portrait of a young woman that represents poetic inspiration. One of my favorite paintings since the first time I saw it in Paris 35 years ago.

Thomas Gainsborough at the National Gallery.

At the National Gallery, I visited a few of my favorite paintings, including the portrait of the Arab race horse, “Whistlejacket,” by George Stubbs  and some of the Impressionists. 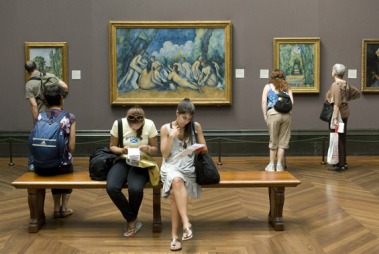 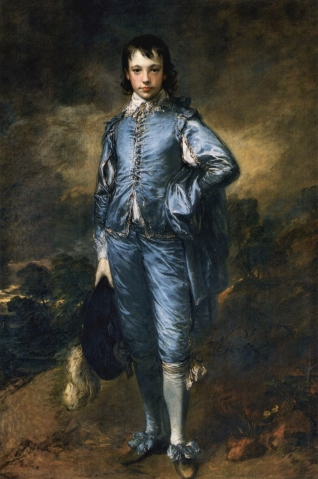 But the most interesting painting I studied was one by Thomas Gainsborough called “Mr. and Mrs. Andrews.”  Before you look at that one, first check out a Gainsborough’s most famous painting, “Blue Boy,” which hangs in the Huntington Library in San Marino, California (where I grew up).  The portrait evokes confidence, wealth and dignity. Combined with the dramatic detail, the young man’s demeanor and pose suggest the artist loved his subject as well as the process of portraying him.

Gainsborough’s portrait, “Mr and Mrs. Andrews,” is a stark contrast to “Blue Boy.” At first viewing, the painting appears to be a sympathetic portrait of a young couple on their estate, and that is how many art students describe it.  But when you look at it more carefully, it seems to be a mockery of its subjects. 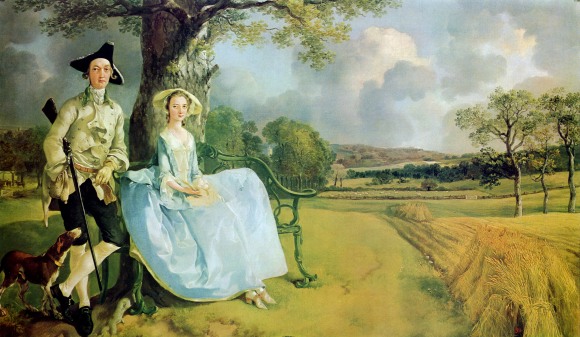 The couple, who are landed gentry in 18th century France, are unattractive and two dimensional. They pose uncomfortably on the edge of the painting, suggesting the painter cared more for the landscape than the people who paid him to paint this portrait (and indeed, he loved to paint landscapes and was a naturalist). The couple look disdainfully at Gainsborough, who is beneath them in class. The painting famously leaves a blank spot on Mrs. Andrews’ lap. Some critics believe Gainsborough meant to paint a child there and never got around to it. Maybe Gainsborough was commenting on this woman’s barren life.  To me, the painting is so unsympathetic, it is some kind of social statement. Did Gainsborough consider this couple wannabes? Did he have a personal problem with them? Maybe he thought they were putting on airs. I guess I’ll never know.

The “Elgin Marbles” at the British Museum

What would a trip to London be without an afternoon at the British Museum? I went there to affirm my beef with the British Government, which stole part of the Parthenon from the Greeks. If you are old like me, you probably remember hearing about the “Elgin Marbles.” Today they are usually called the “Parthenon sculptures” and they fill two large rooms in the British Museum.

Oops, did I say steal?  The rightful owner of the Parthenon sculptures is a matter of ongoing dispute between England and Greece. Here is how the British Museum explains how it ended up with Greece’s most precious antiquities: Lord Elgin, an English diplomat in Greece in the early 19th century, got “permission” from a high-ranking official in the government of the Ottoman Turks to ship the Parthenon sculptures to England.  The Ottoman Turks were occupying Greece at the time without the permission of the Greeks.  The Parthenon sculptures were given to Elgin without the permission of the Greeks. Elgin kept the sculptures for himself until he went broke, when the English government bought them from him for a small sum.

The Acropolis Museum, built in part to house the Parthenon Sculptures that remain at the British Museum.

So how do the English justify keeping these Greek treasures? Initially, they worried that the Greeks didn’t have a safe place to keep them. So the Greeks built a state-of-the-art museum. Then the British government changed its reasons for keeping the sculptures. Now it refuses to return them to Greece because everyone else would want their stuff back. Imagine that. And, well, the British government “bought” them from Lord Elgin. In the US, people go to jail for buying stolen tape decks at the flea market so I am not sympathetic to this argument in particular.

The Parthenon at the Acropolis without the sculptures.

I think the Parthenon sculptures should be renamed the Elgin Marbles because calling a Greek antiquity by the name of a member of the English elite kind of sums it up. I dunno.

A painting in a museum hears more ridiculous opinions than anything else in the world. 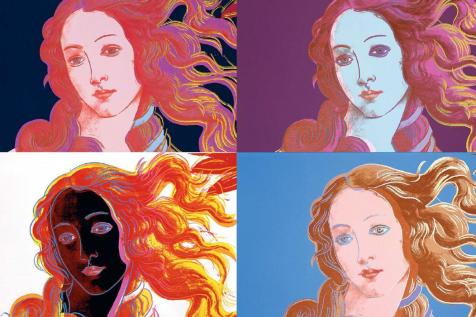 The photos here are not my own because my iphone ate the ones I took in London.  Thank you but no they are not in the icloud. 🙂