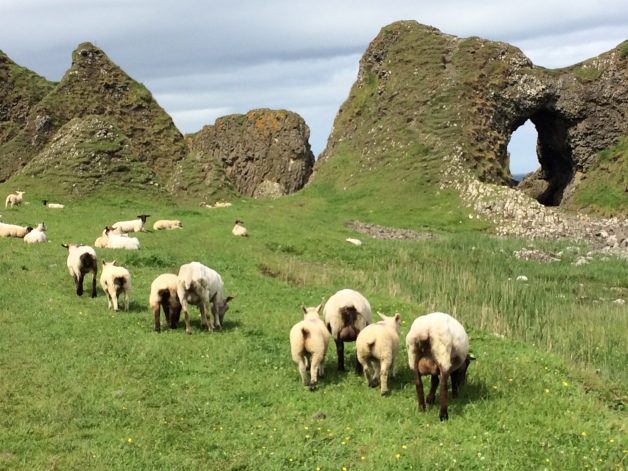 Ireland is one of the most beautiful places I have ever visited and the Irish are taking good care of it. Once you get out of town, no billboards, no rusting cars, no corporate fast food.

I spent part of a week hiking through a lot of natural drama with hiking guide, Sean, and seven women from Germany, Slovakia and Austria. Sean is an Irish intellectual with a lot of stories about Irish literature and history and the natural environment. He can also sing an Irish ballad with the best of them.

On our first day, we hopped a ferry from the village of Ballycastle to the tiny Island of Rathlin, the closest point to the Scottish coast and loaded with history. Marconi’s first telegraphs were transmitted between Rathlin and the mainland.  In the 13th century, Robert the Bruce, King of Scotland, hid there from marauding British soldiers. More recently, singer Mary Black was born there. Here is her moving anthem to Ireland, which she has sung for royalty and heads of state, including Bill Clinton. https://www.youtube.com/watch?v=oRdDnpkR3AQ

Rathlin Island is famous for its birds, especially puffins, which nest here every summer. There are many thousands of them on these cliffs. Every one of those little dots. 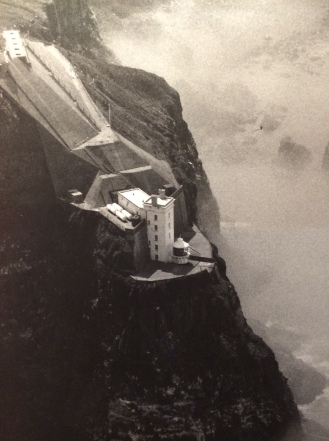 Rathin’s west lighthouse. We took the steps down the face of this cliff.  It wasn’t scary.

Puffins live most of their lives at sea and mate for life.  Both parents care for the fledgling chicks. 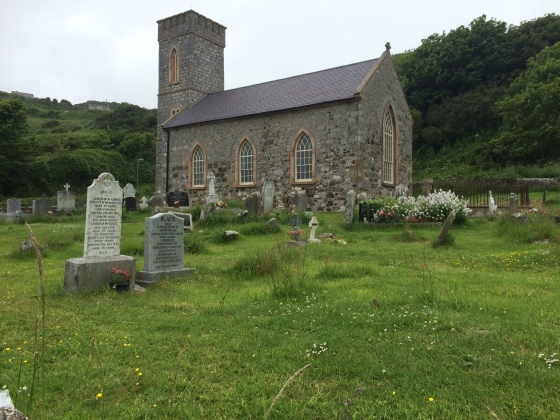 Ancient church on Rathlin Island. Today there are only about 100 residents. Most of the children leave the island for boarding school when they are 11.

One of the week’s highlights for me was an 11 mile hike along the Antrim coast to Giant’s Causeway, a UNESCO World Heritage Site of spectacular volcanic formations that flow out to the sea. Getting to our destination took us across jagged cliffs, rocky beaches and gorgeous pastures. 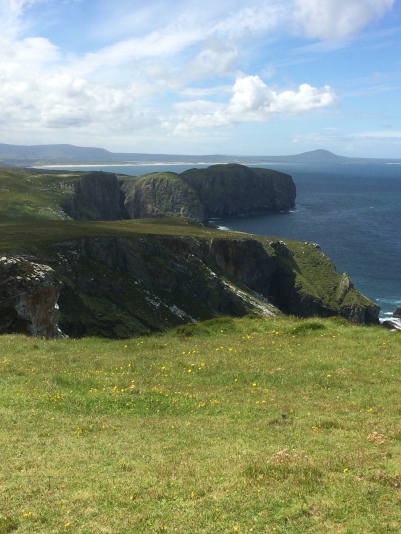 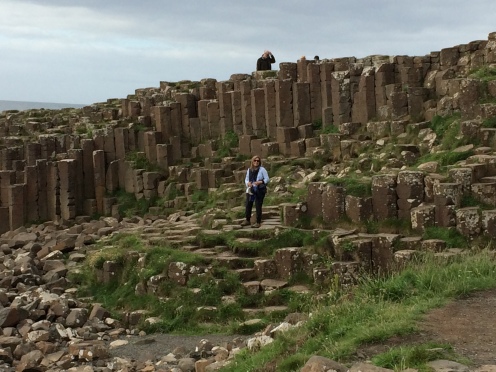 Giant’s Causeway is usually packed with tourists but for some reason, there were only a handful of people when we arrived.  Maybe that is why the man behind me is scratching his head.

The organ pipes at Giant’s Causeway

My hiker friends taught me a little German. My favorite word is “schmuddelig” which means a little dirty, used the way Americans might use “funky.”

We spent part of a day in Derry, which the English renamed “Londonderry” in the 17th century. More than 300 years later, the town’s name is still a point of contention.  Derry is just inside of Northern Ireland and, with Belfast, the center of “The Troubles” and violence between the Loyalists and the Republicans.  Like Belfast, Derry has amazing murals to commemorate the people who fought for independence and equality. Derry is lovely, with many historic buildings, a medieval wall around the old city and a gorgeous river.

Mural of Annette McGavigan, a 14 year old who was shot in the back of the head by the British military when she was walking down the street. The broken gun and the butterfly are both symbols of peace. 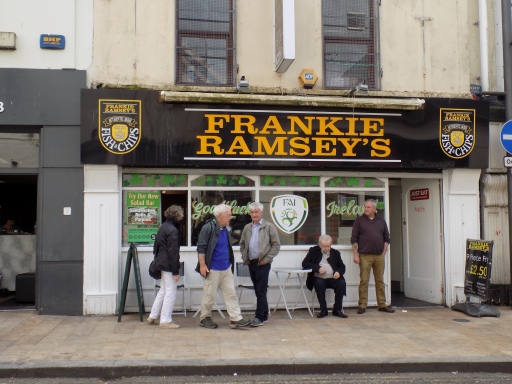 Tour guides, Sean and Martin (2nd and 3rd from the left) attended college together and went through The Troubles in Derry. Frankie Ramsey’s was their favorite fish and chips spot in the good old days. 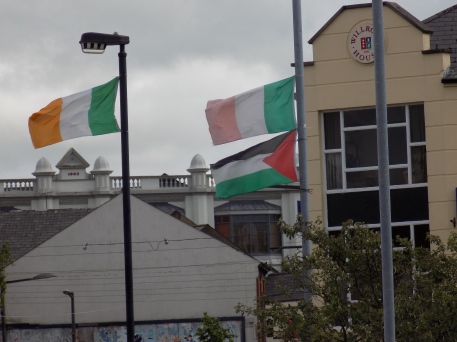 Derry is a very political place. Below the Irish flag is the flag of Palestine.

It is also a place with a sense of humor, typical of Ireland.

Another hike took us out over moss and heather-covered hills to a promontory and then to a gorgeous beach. 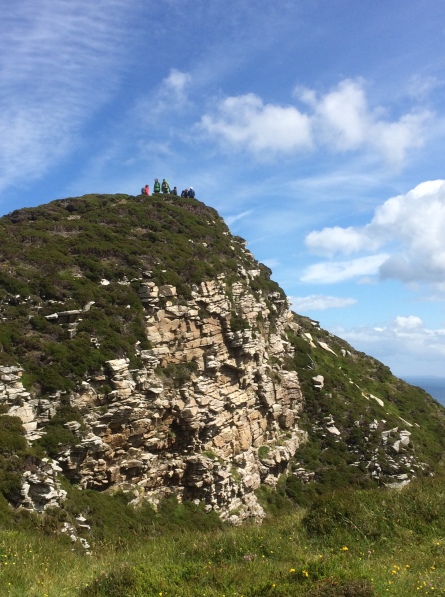 This narrow cliff hangs about 400 feet over the Atlantic. Someone had to stay behind to take the photo…. 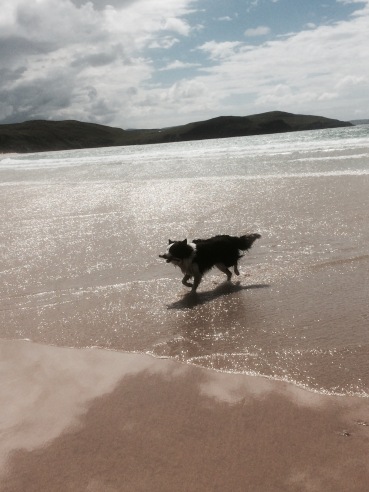 This very personable Sheltie convinced us to find a stick and then to throw it many, many times.

The charming village of Ramelton where we stayed for part of the week.

AND…Ireland beat Italy in the play offs for the European Cup on Wednesday!  This is really big news here and the team will play France on Sunday.