Hope is a word you hear a lot on Lesvos. Many here talk about how lucky they have been to have met so many people who have lost everything but still have hope. This week I was inspired again to have welcomed a boat to shore. After hearing that a lot of boats would be landing south of Mytilene, Jo from England and I drove over the mountain to Mytilene.  We arrived at about 6:30am at “Campfire,” where the NGOs stand watch all night, and met Cedric, a photojournalist from Paris.  Several boats had arrived before dawn, escorted in by Frontex or the Coast Guard.

As we stood on the shore, Jo spied an overloaded rubber raft that Frontex and the Coast Guard missed.

Lifeguards in rescue boats motored out to make sure the raft would make it into shore safely. Dozens of volunteers on shore applauded and waved as the raft pulled in. Everyone was safe. An older woman hugged me for a very long time.

There are now more volunteers on the shores of Lesvos than there are refugees. The need has moved to mainland Greece where more than 35,000 refugees are estimated to be waiting in horrible conditions.

As we made our way back to Molyvos, we stopped at Afghan Hill with kites. A kite soaring on the wind represents hope and Afghans are famously kite-flyers. When we arrived, we were advised to put the kites in storage for distribution to deserving people at another time. Hmmmmm….no.  (Unfortunately, the need for crowd control at Moria has required a lot of big-hearted people to behave in some bureaucratic ways — I am trying not to think about it). I stood at the tea tent with the kites until I got the kind of looks that asked whether I was sharing. It was delightful to see groups of young men and children assemble the kites, which they would later take up on the hill.

And there is the Hotel Elpis — also called “Hope Center” because Elpis is Greek for “hope” — which was an abandoned, decaying shell of a building when I left Lesvos in early January.  With nothing but private donations and hard work, it is now almost ready to house up to 110 people in transition.

Spring brings an explosion of Wisteria blossoms in parasols over the tiny streets of Molyvos.  The people here hope tourists will return so their businesses survive the generosity they have shown almost half a million people. 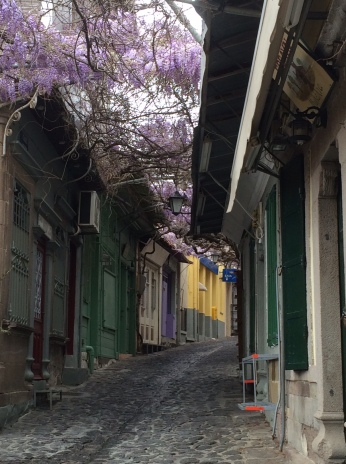