Yesterday, I traveled with Oakland friend Nanci to Moria refugee camp, 35 miles south of where I am staying in Molyvos. Moria is designed to be a way station, a place where refugees can stay for a day or two while they are going through registration with the Greek government before they board ferries to Athens. It is likely to become something longer term as the Greek government tries to manage the back up from here to the closed Macedonian border.

Moria is actually two camps — one that lies behind high barbed-wire fences in a former prison and one that is out in the open, which is called Afghan Hill.

Young Afghan men talk about the future scanning a map of Europe.

Afghan Hill is a tragedy or a miracle, or both, depending on your perspective.  It is a tragedy because it serves those who have no where else to go, mostly young Afghan men and families. They are not permitted at Kara Tepe, which provides services to Syrians only. The side of Moria camp inside the gate serves mostly families.  And actually I am not sure about the rules and circumstances, which are unclear and changing. But I do know that Afghan Hill is mainly filled with Pakistanis, Afghans and stateless Moroccans and it is a shameful excuse for a place to live.  And yet — and here is the miracle —  it is a thousand times better than it was before a small group of people called “Better Days for Moria” took over.  Once a filthy, dangerous and depressing place, it is now is a place of safety, where volunteers provide compassion, dry clothes, meals, and medical care. It is luxury compared to the conditions at Idomeni, where most of the people here are headed. 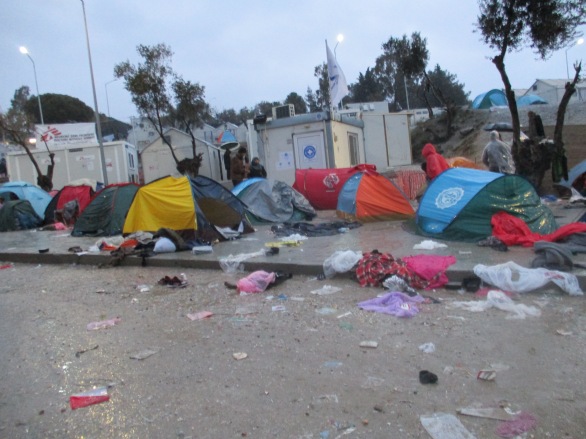 As usual, I arrive with 120 pounds of Lesvos oranges, which disappeared in about 5 minutes. The people in the camp have access to healthy food but not enough, especially considering they are living in the cold all day. The food service is working on increasing its capacity to serve the higher numbers staying at the camp.

An Afghan teenager mugs for us under the “I love Lesvos” sign.

I wrongly feel entitled to resist the bureaucratic but necessary rules at the camp. During previous visits, I have learned the the volunteer coordinators will usually look the other way. I scan the area around the tea tent for someone who has a need and the courage to make eye contact.  A young woman heads toward me with a 5 year old who has soiled his clothes.  Normally, she would have to wait in line for up to an hour to get clean clothes for her son.  I enter the dry clothes tent through the white privilege door and return with sweatshirts and pants.  She thanks me and heads for the open air sink that doubles as a shower for the hundreds of people living in mud.

A little later, I see a volunteer at the dry clothes tent tell a young man in a t-shirt that there are no more jackets. I return to my car and pull out two black jackets. They were sent from Norway, so they are well made and warm. I return to the dry clothes tent at an oblique angle and catch the young man’s eye.  He smiles and approaches me. As I watch him slip on the jacket, a teenager in a cotton shirt relieves me of the other jacket. 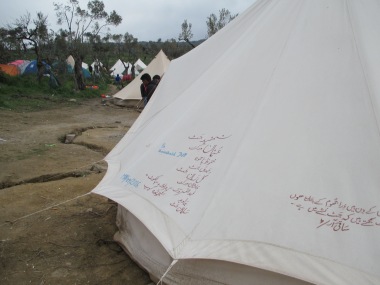 The lucky ones on Afghan Hill get tents like these. In some cases, six people are assigned to a single tent.

The camp is full to capacity. In spite of the cold and unpleasant smells, the people staying in the camp are calm and polite.  Even the children are quiet. Young men convene in small groups and volunteers work with children on arts and crafts projects.

In the food tent, we are delighted to find young men dancing to traditional Afghan music. There is a lot of laughter and a little bit of playful competition between the dancers.

At the bulletin board with the map of Europe, Nanci engages a young man who speaks perfect English. Later in the day, we are able to spend some time with him and his brother.  I will not share specifics about them here because, like so many young men in the camp, they are escaping Taliban recruiters. The older one was stabbed by them.  They have each paid $6,000 to get to Lesvos, crossing treacherous terrain in freezing weather before boarding a rubber raft to Lesvos.  They say they miss their family and one is near tears.  Before they left Afghanistan, the older brother was studying at the university and worked for a corporate contractor that supported American troops. When they arrived at Afghan Hill, they found three of their cousins, a remarkable coincidence since they weren’t aware their cousins had fled.  The older brother says he knows Afghans are not wanted in Europe and he doesn’t know where they will go.  He just knows he cannot return to Afghanistan.  He says his younger brothers will have to leave the country as they approach 18.

As difficult as the conditions are at Afghan Hill, it is a place of great significance for the people here — their first home in Europe.