Thirty years ago, I visited the Spanish town of Cuenca and, at the time, I told myself I would return.  So I did it, I made it back to Cuenca!

Lying about 100 miles southeast of Madrid, Cuenca’s old town is perched on the top of a hill overlooking two dramatic gorges. The first time I visited, Cuenca impressed me because of its funky historic buildings, bohemian artistic community, and great natural beauty.  It is famous for the “Casas Colgadas” which seem to hang from the cliffs over the gorge. The natural beauty remains but the funky and bohemian are not so apparent. Designated a UNESCO World Heritage Site since my first visit, Cuenca now features high end hotels, restaurants, and small museums. Tourist buses run up and down the narrow winding streets to shops selling local wines and cheeses.

Cuenca has been discovered, but I wasn’t disappointed.  After arriving on a hot afternoon, we walked up the hill to old town and rewarded ourselves with beer and vino de serrano in the Plaza Mayor and checked out the local pottery shops.  On the way down the hill, we stopped for dinner at a nouvelle-ish restaurant called El Secreto, which we chose because one of us had a secret to share.  Mags had seared duck with caramelized bananas and an onion marmalade in a port reduction.  I had a salad of octopus, avocado and tiny figs which was wow. (No, I can’t tell you the secret!).

On our second night, we made pasta with fresh local tomatoes, red peppers, Spanish olives and a ton of garlic, and listened to our favorite music. As the evening cooled, we trudged back up the hill for post-pasta  recovery and later finished off the evening with dark chocolate and, of course, Rioja.  This is similar to what we did on our third night except with eggplant. On our fourth night, we sauteed prawns cooked in garlic, olive oil and chilies.

Wrapping up olives for the road.

We liked the art at the Museo del Arte Abstracto Espanol.

Mags is on the wrong side of the “prohibito” line!

But I liked some of the street art even more: 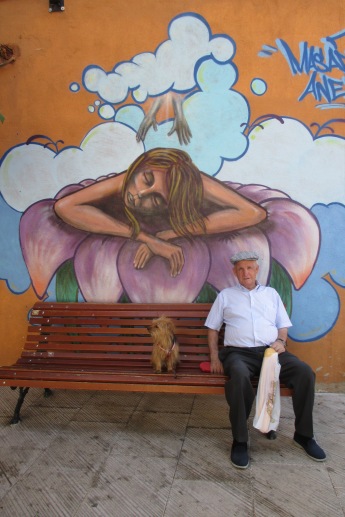 I was thrilled when we accidentally found a horse show so we watched serious stadium jumping for a couple of hours.

If you have ever tried to get a shot like this, you know Mags is a good photographer. Getting over a four foot fence is hard too.

But during our time in Cuenca, we actually did not much of anything a lot.

Mags taking a break at the cathedral steps.

This is feeling a lot like a European vacation so far.

“Cultivate the habit of being grateful for every good thing that comes to you, and to give thanks continuously. And because all things have contributed to your advancement, you should include all things in your gratitude.”
Ralph Waldo Emerson