At first, I wasn’t crazy about Albuquerque. Miles and miles of strip malls, empty lots, parks with highway roar. Although the city’s Old Town is atmospheric, most of the stores sell junk, and the Old Town’s “best” café served me a greasy chili rellano with a side of canned spinach. Wasn’t canned spinach banned in 1959? 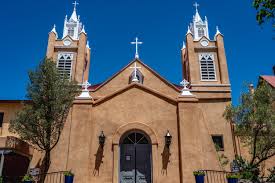 Fortunately, on the last day of my visit, Brad changed my mind about Albuquerque. Brad was my Routes Bicycle Tours tour guide. Even before the official start of our tour, I felt better about Albuquerque because Brad was wearing a New Mexico flag mask. I love New Mexico’s flag! The symbol on it belongs to New Mexico’s Zia tribe. Its four parts represent the four cardinal directions, the four seasons of the year, the four periods of the day, and the four seasons of life.  These four elements are tied together with a circle of life. I naturally expected the philosophical context of the mask represented Brad’s approach.

Brad in his flag mask on a bridge over the Rio Grande. He and his wife moved to Albuquerque from Seattle 10 years ago and have a baby named Wyatt.

We set out peddling toward the city’s open space just north of downtown. It was sunny but not quite warm. I was feeling grateful that Albuquerque is flat since what muscles I have left have been doing more hiking and riding than biking. And hurray my thighs survived the only hill in town — to the top of a bridge over the murky Rio Grande River. The Sandia Mountains on the east, and the austere hills of the Petroglyph National Monument on the west. Cottonwood forests line the river on both sides. I caught my breath and Brad shared a little of Albuquerque’s history. The region was settled by native tribes when the Spanish arrived in the region in 1540. It’s not clear how things transpired between the two groups in the early years, although some of the ancient pueblos remain in the area (and we know how other things ended). The city was founded in 1706 and named after the Duke of Albuquerque, a Spanish viceroy. Ahhhh, I thought, that’s why I see “Duke City” on signs all over town.

Acoma Pueblo near Albuquerque is the oldest, continuously-inhabited community in the US.

Albuquerque owes a lot of its early development to the Santa Fe Railroad. The tracks were originally supposed to go through Santa Fe, but the railroad didn’t want the expense of beating a path through the Sangre de Cristo mountains. So, at the last minute, the railroad changed its plan and rerouted the tracks through Albuquerque. I got the feeling Albuquerque residents have a lot of train-pride, and might be happier if the railroad company had changed its name when it changed its New Mexico whistle stop.

That round thing at 11 o’clock is a porcupine!

From the bridge, we returned to the park and headed south to downtown. New Mexico has had some pretty strong public safety rules during the pandemic, so downtown was all but shut down, and easy to navigate. The center of the city is loaded with murals, some by local artists and some by members of the international community of mural painters. The city commissioned many of the murals, but some appeared organically last summer during the BLM protests.

This stunning sculpture at a Tingley Beach Aquatic Park is called “Fish Globe,” and is constructed of thousands of interlocking fish-shaped pieces of steel. By Colette Hosmer.

Albuquerque is especially fun for fans of “Breaking Bad,” (me) It’s easy to find many of the places where the show was filmed and the setting is so integral to the show’s story and identity. (Here’s a really good article about this:  https://www.salon.com/2013/08/11/how_the_desert_made_walter_white/ ) We went by Jesse’s house, a drive-in where one of the big deals took place, and an office building that was the site of an interrogation. We didn’t see the tortoise carrying the head of a cartel member.

Jesse blackmailed his parents into selling him this house at a deep discount because of a gruesome murder that occurred there. Jesse was the murderer.

At some point in our conversations, Brad talked about other attractions in Albuquerque that are closed because of the pandemic, like the ancient pueblos and a dozen excellent museums, and the tent rocks at Kasha-Katuwe National Monument (I really wanted to go there). He told me about the city’s urban farms and the country’s oldest winery just north of town, and the annual pow wow.  Hearing about these places made me realize I should return post-pandemic. 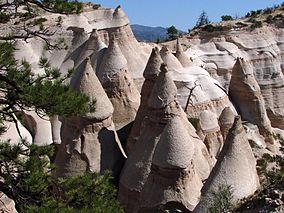 The tent rocks at Kasha-Katuwe National Monument that I didn’t see. Photo: Wikipedia

Anyway, Brad lived up to the philosophical context of his mask. He loves Albuquerque and now I do too. I guess the lesson is that I shouldn’t judge a city after a couple of walks and a trip to Trader Joe’s. I guess I should know that lesson by now….Never stop learning.