In the mid-19th century, the Mormons left New York to escape religious persecution. They  kept going west until they found a place of peace in a spectacular canyon. They settled there and named the canyon Zion — a holy place of refuge. Before the Mormons, Native Americans believed Gods inhabited the canyon.

The River Walk to the Narrows.

My visit this week didn’t involve any deep spiritual awakenings, but I loved my two days on the trails. I hiked the River Walk, the Emerald Pools, and the easy part of West Rim (which goes to the terrifying but wildly popular Angel’s Landing). I stayed in the little town of Springdale near the park gate, full of charming hotels, organic-y cafes and craft shops. 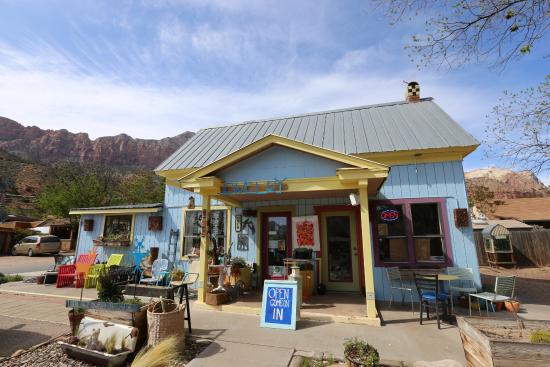 I’d planned to drive from Zion to Bryce Canyon today, but a snow storm is on the way, so I went east instead of north, and stopped briefly at Grand Staircase Escalante National Monument. When we hear the word “monument,” we usually think of a single discrete object. Escalante is not one thing at all, It’s almost 2 million acres of desert wilderness, with miles of hills, canyons, and creeks. Lots of sand. Its landscape is varied, but I only saw what was close to the highway, which is mostly hills like these that go on layer after layer to the horizon:

One of Escalante’s most accessible trails is 30 miles from anywhere. Today, Toadstool Hoodoos Trail became one of my favorite trails ever! It winds through and over all kinds rock formations, and then opens out into a valley of this:

The mushroom-y things are hoodoos, the remnants of giant rocks that eroded unevenly because they were like rock pancakes made of different types of rock materials that break down at different rates. I am not saying that right, but you know what I mean.

They remind me of Dr. Seuss!

This road trip has been day after day of deep gratitude for our federal government. I didn’t expect that at all.

“You’re off to Great Places!
Today is your day!
Your mountain is waiting,
So… get on your way!”
― Dr. Seuss, Oh, the Places You’ll Go!