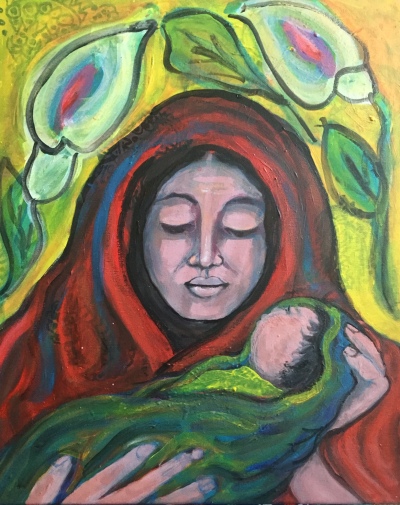 Painting by my big sister and second mom, Sallie Latch

On this Mother’s Day, I am going to begin with a story that makes me cranky but I will end with one that makes me happy. So, as Rachel would say, stay with us.

A couple of nights ago, a reporter on national news (it was Lawrence O’Donnell) told the story of a young friend who left her job to help care for her disabled father. The reporter suggested the nobility of this young woman’s sacrifice and the tender irony of a 25 year-old sleeping in “her childhood bed.” The story concluded with the young woman’s observation that, during this period of “new worries,” her neighbors “swing well away” to give her father’s wheelchair more room than usual on their daily walks. The reporter suggested the neighbors’ gesture was evidence of American “love” and “solidarity.”

This was a nice story about a good person dealing with difficult circumstances. But there are enough things wrong with it to fill a book, and I almost wrote it. You should thank me for using the erase function! I will just say this. There is something upside down about a well-heeled reporter using national air time to lionize his well-heeled friend for helping her family, and to use words like “love” and “solidarity” in reference to neighbors who take three or four extra steps — literally —  to protect a man from an infection that could kill him.

The things going on in the reporter’s not-very-interesting story are just old-fashioned decency. With all of the real gestures of humanity going on, (google it) is that the best he could do? Our reporter is either lazy (he couldn’t be bothered to track down a good story), elitist (his friends deserve air time) or delusional (he thinks his story represents the best of us).

I admit to being lazy, elitist and delusional at times, but I have a better story.

Fifty-nine year-old Robby lives in a small town in rural Louisiana. Although she served in the US Army and goes to church every Sunday, Robby lives in near-poverty after being “laid off” from two jobs because of her involvement in a lawsuit against three oil companies. Although Robby knows the truth about why she is jobless, she isn’t bitter about it. Instead, she has worked for her community without a pay check while she is grandmothering and caring for her mother with serious dementia.  Robby says she is privileged to have her mother live with her.

Robby has always been a quiet activist in her community and during the past couple of months, she has ramped-up her efforts. She informs her community about how to stay safe and works on food drives for those who are jobless or isolated. She has organized a group of friends to make masks for the poorest and most vulnerable neighbors. There is a too-long list of other things Robby has done to support her community over the years.

Without money or political power or expectation of, well, anything, Robby quietly works to make a difference in many lives every day because she believes it’s the right thing to do. She is the very embodiment of American goodness. Of just goodness.