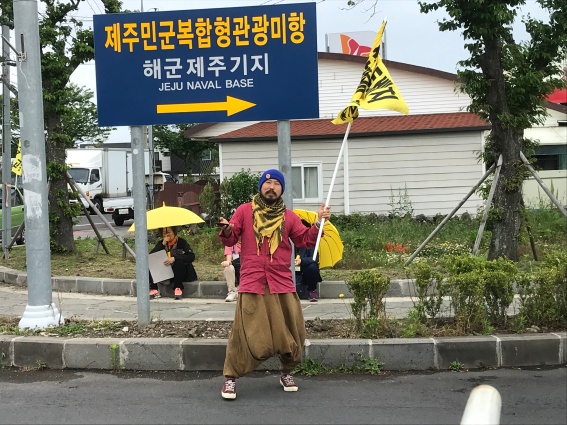 I treasure my life on the road and I remind myself every day that it must be more than an extended vacation. I am in it to learn and connect. The pyramids are breathtaking but slaves built them and climate change could destroy them. And worse and more. Fortunately, for every tragedy, there seems to be people pushing back on tragedy. Yesterday, I learned a little about both on the Island of Jeju, “South Korea’s Hawaii.” 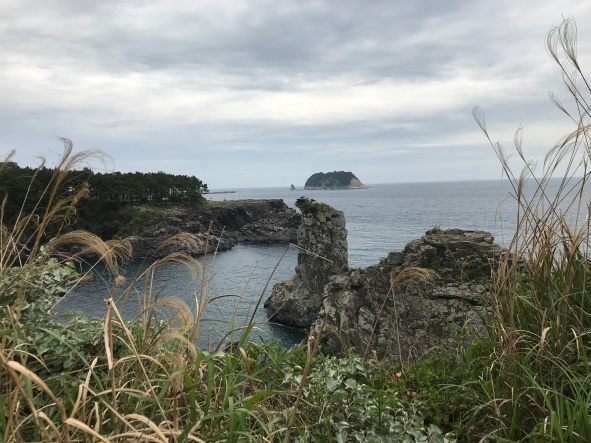 I left our hotel right after breakfast (homegrown vegetables, homemade bread and an egg from a neighborhood chicken) for a 20-minute bus ride to the top of a narrow road that rambled downhill toward the coast. The morning was cool and quiet, perfect for a walk through small farms and pine trees. Birds, a couple of horses, no cars. Jeju is so beautiful. 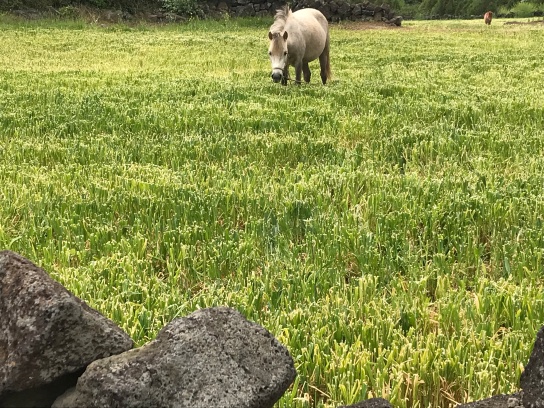 My mother would have said I set out on this small adventure “half-cocked.” (Has anyone else ever used this phrase?) I didn’t know exactly where I was going or what I would find if I got there. All I knew was that, for six years, a group of residents of Gangjeong village had been protesting a military base supported by the US.

Part of the military base at Gangjeong

And, mom, I did have a little historic context: 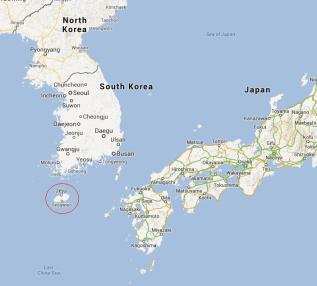 Jeju Island is in a strategic location between Taiwan, China, and Japan. It has a history of opposing invasion.

South Korea used to be the southern part of one country called Korea. After World War II, the US and Russia agreed to split Korea in half, and the US “got” the south. Today, it’s hard to comprehend the audacity of this act or appreciate the damage it has caused (An excellent article is here: https://www.nytimes.com/2018/01/01/world/asia/korean-war-history.html). But at the time, the audacity wasn’t lost on many Koreans. Some of them expressed opposition to foreign powers dividing their country, and support for a socialist model of governance. On April 3, 1948, a group of Jeju Island residents rioted after local police opened fire on them during a peaceful celebration of the end of the Japanese occupation (yet another longer and very sad story https://www.history.com/news/japan-colonization-korea). In response, during the six years that followed, the Korean government, with the help of the US military and right wing thugs, indiscriminately destroyed Jeju villages and murdered more than 30,000 Jeju residents. 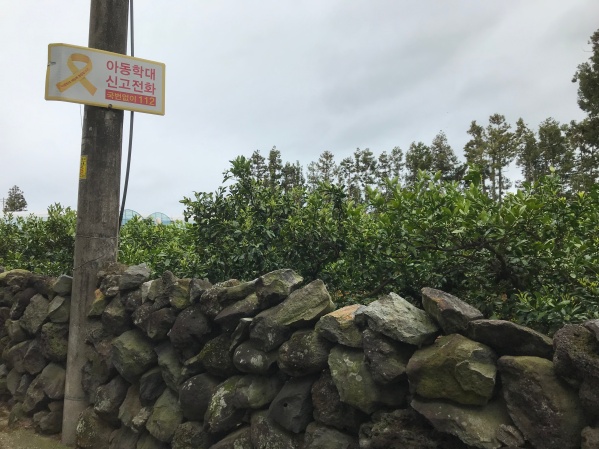 Yellow ribbon signs on my path toward Gangjeong. The mandarin trees and walls of volcanic rock are everywhere on the south part of the island.

Since 1948, the US has retained a strong military presence in South Korea and has never acknowledged its role in the massacres on Jeju. 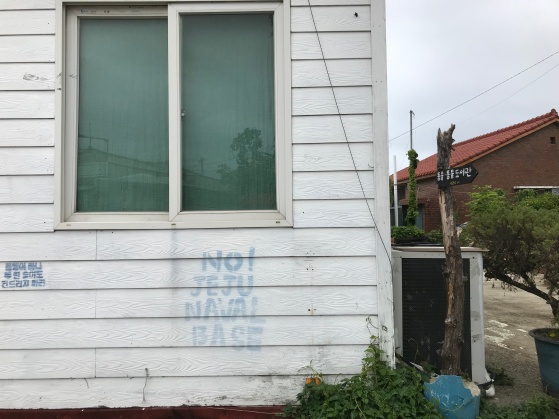 After walking past hundreds of greenhouses sheltering strawberry plants and mandarin trees, I saw small signs with yellow ribbons on utility poles. A few blocks later, graffiti on the walls of small houses. And then, a modern three-story building with a sign over the door that said “St. Francis Peace Center.”  I stopped to get a closer look. A young woman working in an adjacent garden saw me and asked “Are you here for the Human Chain?” I replied, “Yes, I think so.” I didn’t know what I was agreeing to. “Please join us,” she said. “We start in ten minutes.” 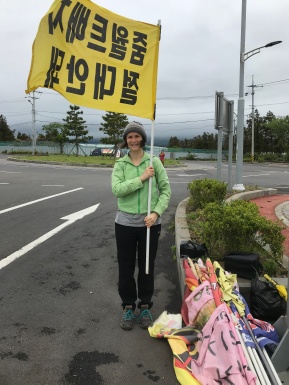 Curry from Maryland marches every day

The young woman is Curry, an American from Maryland who has lived in Gangjeong for six years supporting peace advocacy, mostly as a translator. As I followed her down the road, Curry explained that the local activists openly protest the expansion of the military operations in Gangjeong, and the US’ continued military presence in Korea. They want an apology from the US for its role in the 1948 massacre and they want the reunification of Korea. More about that here:

Curry said the US Coast Guard recently conducted military exercises there, adding “The US coast seems to have expanded to include the coasts of other countries.” She is also concerned that the US plans to send Zumwalt destroyer ships soon.

After a couple of blocks, we reached a crossroad near the gate of a giant military installation along an otherwise unspoiled waterfront. Th 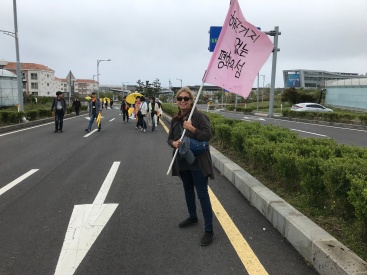 ere, for a half an hour, Curry and I and 3 dozen Koreans, sang songs and danced and walked to and from the gate of the Jeju military base. The same ritual occurs every day, except Sundays, after a mass at the Catholic Church a couple of blocks away. Curry says on some days, only six or eight show up. On other days, there are hundreds.

Even at this high security naval base, she said, the military leaves them alone. She said it like that was a good thing, and maybe it is in light of Korea’s history. But being ignored, I thought, is probably not a good thing in the activist business.

After the protest, six of us crossed the road to a makeshift cafe that serves lunch to the protesters every day. Three friendly dogs were tied up to boxes. A few chickens shuffled through a small pile of garbage. At the table inside, my hosts were buoyant and friendly. Eventually, one of them asked why I had come. I said I wanted tell them that Americans don’t know what happened on Jeju in 1948, or what is happening now, and that most would care if they only knew. 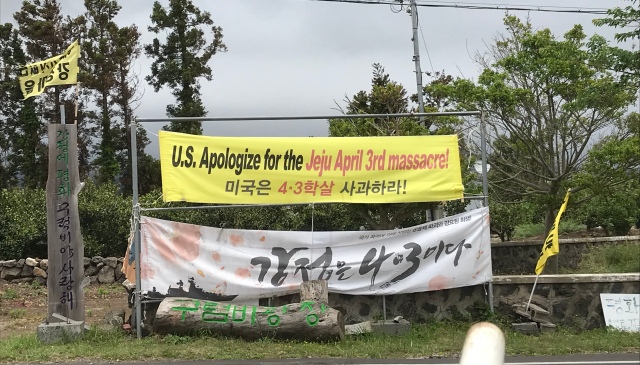 Americans don’t know about something horrible their government did or is doing, but they would care if they knew. When I scratch beneath the surface a little, this seems to be the case almost everywhere I go. It’s a little bit of consolation that there are also a lot of people like the activists in Gangjeong.