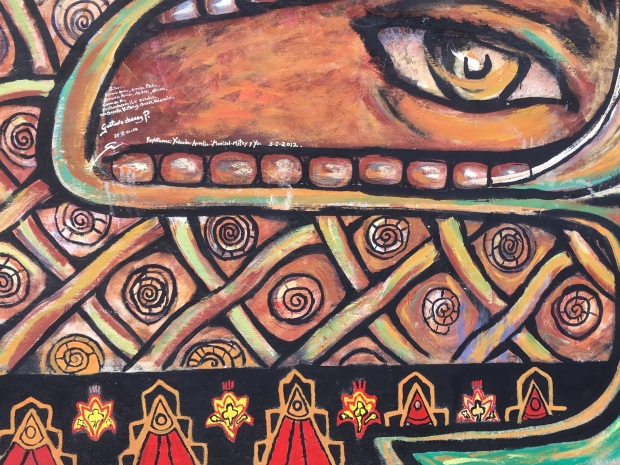 My stomach churned and my head throbbed as the collectivo wound around the hairpin turns on the jungle road. I didn’t get any relief during the straight stretches, which usually included a series of jarring speed bumps. I tried to focus my thoughts on our destination — Oventik, a Caracol for the Zapatista autonomous region. Say what?

Photo by Hammocks and Ruins

Oventik is a sort of home base for Mexico’s Zapatistas, people from Mexico’s indigenous tribes who are committed to living outside the capitalist economy and neoliberal world politics. The Zapatista movement began as a people’s army that formed in 1983 to promote the rights of impoverished indigenous people. After years of unsuccessful advocacy, the Zapatistas took up arms in 1994 and seized several towns in the state of Chiapas.  Many lost their lives in the subsequent battles with the Mexican government.

Following several more years of political negotiations and sporadic violence — and with the support of members of the international community — the Zapatistas prevailed, more or less. Today, the Zapatistas have 55 self-governing communities in Chiapas that provide health care, education and a commitment to social justice to 300,000 residents. Women have an equal role in all aspects of community life, including governance. The Zapatistas do not submit to the authority of the Mexican government, which mostly does not bother them.

I was in a worsening carsickness swoon when our van stopped at the top of a lush green valley. A young Mexican woman sitting next to me tapped on my shoulder, “Senora, estamos en Oventik.” We got out of the van and paused to read the signs that introduced us to the community. Behind the signs, a couple of women were selling vegetables from the porch of a long wooden building. 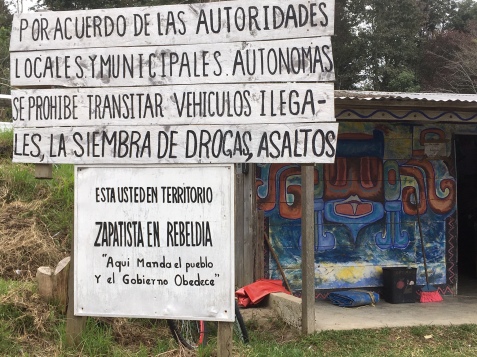 “Here the people command and the government obeys.”

We knew in advance tourists cannot casually visit Oventic. We would need permission to enter the caracol, so we were not surprised to find a locked gate. Behind it, two young women in black masks sat in a kiosk. As we approached them, they gestured us toward a picnic table in front of a small outdoor cafe a few feet away. We sat down, a little puzzled until, a few minutes later, a young man with a clipboard and pen arrived for our first interview. We showed him our passports and explained our interest in visiting. “Queremos aprender sobre la communidad,” Diane explained. In answer to his question about what I did before I retired, I explained that I had worked for “gobierno” on “policia.” Diane gasped and put her hand out to the young man. No, she said in Spanish, my friend is not a retired police officer, she is a writer. He wrote that down.

The young man took us inside the gate to a small wooden building for our second interview. Inside, we introduced ourselves to a man and a woman in black masks sitting behind a large desk. They had smiling eyes and didn’t ask about my career in “policia.” Like the first interview, the second didn’t provide any information about the Zapatistas, only about us. But after a few minutes, the man and woman invited us to tour the site. We could take photos of the murals and the buildings but not the people. Diane handed them a dozen Spanish language books we had brought for the children’s school and we stepped outside.

For about an hour, we walked up and down the hills with our young tour guide, Alberto, who wore a black mask and seemed to have a cold. He was friendly but not eager to answer to our questions. But we did learn that the “caracol” — which means administrative center — has meeting rooms and offices, schools, small shops selling handcrafts, and a health center. A few of the outlying acres are planted in coffee and produce, and a few shaggy sheep wander freely among the buildings.

The site would be pleasant but unremarkable if it weren’t for the art work.

Oventik is an outdoor museum of inspiring murals covering most of the dozens of small wooden and cement block buildings. Most carry specific or symbolic messages about social justice and revolution, all of them focused on people. Dozens of high school students were painting some walls and repainting others. They acknowledged us with nods and shy smiles but I got the feeling they wouldn’t answer any of the questions I still had.

By the end of our tour, we didn’t learn much about the Zapatistas that we had not read beforehand. https://www.theguardian.com/global-development/2018/feb/17/mexico-zapatistas-rebels-24-years-mountain-strongholds  But the murals gave us a more immediate sense of the Zapatistas’ philosophy, and the courage they needed to fight 500 years of repression and exclusion. I left with a feeling of encouragement that people without power can create the conditions for peace and justice.

If you want to visit Oventik, you may not find directions in the tour guides but it’s not that difficult. Just go to the public market behind Santo Domingo church in San Cristobal de Las Casas and keep walking until you hear a man standing next to a van yelling “Oventik.” Don’t forget to take your passport.

“The world is very big and all of us fit, all of us. The only thing that does not fit is the capitalist system because it dominates everything and doesn’t even let us breathe. Worst of all is that capitalism has no end – no death, destruction, misery or desolation is enough. No, it wants more: more war, more death, more destruction.”