After two nights in Juchitan, the Caravan members woke before dawn yesterday to clean up the garbage at their encampment and then headed north at 6am. They had originally planned to take the route to Oaxaca City but at the last minute decided to trek through Veracruz — less mountainous but more dangerous because of the cartel criminals. Some will hop the freight train, also dangerous. 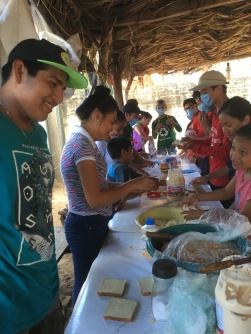 t before, we helped our Radio Totopo friends prepare and distribute more than 1000 sandwiches and 1000 helpings of chicken stew and rice. We distributed hundreds of cartons of milk and hundreds of pounds of fruit. After the sun went down, the Mayor sponsored a showing of a soccer game on a big outdoor screen before thousands of grateful, weary people.

As the Caravan set out the next morning, our Juchitan friends helped us shop — 50 cases of water, 50 cases of milk, 300 pounds of fruit. The Caravan members always want apples but we bought bananas too because they have potassium and more calories. Then Jaime drove us in his red truck through the green hills to meet the Caravan 30 miles north in Matias Romero.

Along the highway, we saw more evidence of Mexican solidarity. People living in shacks waved plastic bags of water toward desperately thirsty Caravan walkers. Utility trucks of all sizes were jam-packed with Caravan members. Even the Mexican Federales (military) were watching out for those spread out for miles who were unable to hitch rides. When we stopped to hand out water, one of their cars stopped to make sure our meager gifts were healthy and legal.

At Matias Romero, most of the Caravan members had arrived by the time we did and they immediately lined up behind the truck. A couple of us walked through the rows of tired people to make sure each of the young children got a quart of milk. A couple of other groups of Mexicans were handing out cans of tuna and rice dishes. There were several Red Cross stations. Some of the young men waited for us to empty cardboard boxes so they would have something to sleep on.

I was, for about two seconds, grateful to see Oxfam there. They had brought a truck with a couple of small tanks of water.  But because the water tanks said OXFAM and not AGUA, people who needed water were getting it from Mexicans while the Oxfam volunteers sat quietly alone in the shade.  Doing nothing. I yelled at them,  “Why are you here? Why don’t you bring milk for the babies?”

As our truck pulled out of the encampment, I fought back tears because I would not be able to follow the Caravan through Veracruz. To console myself, I waved at the young men standing in small groups and yelled “See you in the United States!” But I think I will see them in Puebla.