Yesterday, my San Francisco friend Diane and I arrived in the unassuming, humid and hot city of Tapachula, in the state of Chiapas, Mexico. It’s definitely a weird choice for a  visit — unless you want to support the people of the Caminata de Migrantes, referred to in the English language press as “The Caravan.”

What is the Caminata de Migrantes? It is people who started walking north last Monday from the Honduran border toward Mexico, headed for the US. The Caminata began with 160 people. By Friday, 4,000 people approached the Mexican border 327 miles away. They had traveled on foot, many carrying their children, few with anything but day packs and phones. Along the way, the Guatemalans supported them with food, clothing, rides on buses and flat beds, and encouragement. 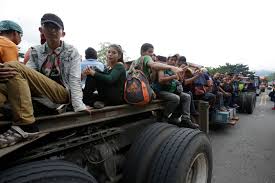 At the Mexican border, the people of the Caminata knew they would face Mexican riot police at a metal gate on the bridge over Rio Suchiate. The gate had been built that week to keep them out of Mexico in response to taunting and threats from the President of the United States. On Saturday, thousands of members of the Caminata stood calmly on the bridge and eventually broke down the gate.  Others swam or took small ferries across the river. No violence on either side other than one incident involving tear gas.

Caravan on the Guatemala-Mexico border bridge in Ciudad Hidalgo, Mexico, on October 20, 2018. Photo by Time, Inc.

The politics surrounding the Caravan are complex, and the powers-that-be want you to focus on the politics so you will overlook the reasons 4,000 people would set out on a dangerous 1500 mile trek with nothing, maybe not even the hope of a better life. In Honduras, they can’t find work. Their children are hungry. Some have been subject to violence. They are threatened and extorted by gangs, drug dealers and corrupt politicians. The situation has evolved from the policies of the United States and the global economy. You can read about that here. http://inthesetimes.com/article/21427/honduras-temporary-protected-status-immigration-trump

When we arrived yesterday, we didn’t know what to expect. The news stories haven’t provided many clues for unaffiliated volunteers arriving here without connections. Like us. So this morning, Diane and I went shopping for what a CBS reporter told us was most needed among the thousands who had slept on the cement in the city’s main plaza the night before: diapers, milk, baby food, sanitary napkins, bananas and, of course, oranges.

Diane at the Walmart next door to our Holiday Inn.

Then we spent several hours in the plaza distributing what we had brought and learning a little about what is going on. Except for a couple of Red Cross vans, there were no signs of charitable organizations among the swell of exhausted and hungry people. One young man from the Caminata offered to help us haul fruit from the market behind the iglesia. Another helped with keeping people in lines and rounding up mothers with young babies. Several made sure the garbage was picked up in the plazas and adjacent streets. Locals handed out food and water from trucks and makeshift cooking facilities. A local restaurant owner said we could use her kitchen to make sandwiches. 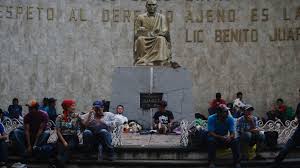 Contrary to the expectations we might have had if we didn’t know our president is a consummate liar, we found no “unknown Middle Easterners” (we tried, we love our Middle Eastern refugee friends) or rapists and murderers (they stayed behind in Honduras — why would they leave?). Instead, we saw thousands of stressed out, hungry people helping each other, talking quietly and then lining up in the main road, without police support, to resume their walk north.

We didn’t find any criminals except that baby on the left who grabbed his brother’s toy just seconds after this shot was taken.

We look forward to spending part of tomorrow with the next group expected to arrive in Tapachula.