The first time I visited Oaxaca almost 30 years ago, a friend asked me why I would choose Oaxaca for a vacation because “it’s the Fresno of Mexico.”  I’m Armenian so it wasn’t a good choice of insult but the cities are similar in a few ways. Both have a lot of poor people and strong connections to the ethnically diverse rural communities outside their city centers. But only one has world-class colonial architecture, a prominent arts community, and a spirit of political activism. Also a lot of mole and mezcal. 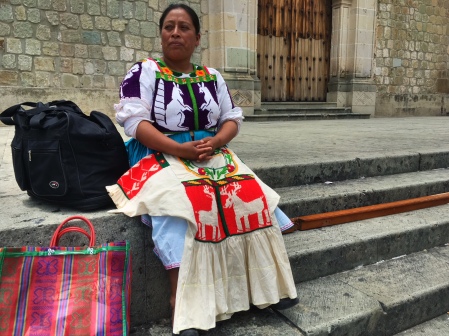 Inside the Templo de Santo Domingo, giant walls are covered with elaborate gold-gilded designs and paintings.

Whatever Oaxaca was 30 years ago, I discovered this week that it has certainly chan

ged from something that felt modest to a place where small-time international investors are expecting something big. The old part of the city has become a fascinating mix of old and new — designer hotels next to unassuming tiendas, run down cantinas alongside bars reworked to attract affluent young Mexicans and tourists. Souvenir shops sell pottery,  embroidered blouses, and “alebrijes,” the brightly painted, wood carved animals that have made their way to expensive American gift shops.

There is a lot of art here — most of it carrying social and spiritual messages — and it seems to serve every demographic. In one gallery, I saw a Rufino Tamayo print for $12,000 (another reminder that if you have to ask, you can’t afford it.). In another, a young proprietor showed me a $2 card and explained the political significance of its subject to the poorest people in his community. Skulls and references to Oaxacan history are dominant themes. 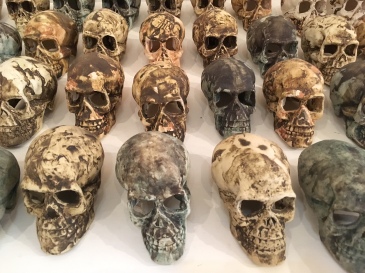 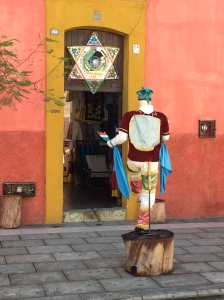 In spite of the wealth and global attention the city has attracted, its politics are loud and local. All through the center of the city, there is evidence of protests, consciousness-raising and advocacy for civil rights on behalf of  the poor and working people, many belonging to 16 indigenous groups, mostly Zapotec and Mixtec.  Most of today’s activism has evolved from a popular movement led by the teacher’s union in 2006, which was emboldened by the federal government’s violent response. 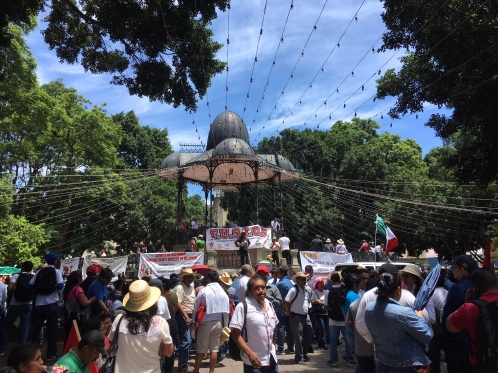 There is usually some kind of political activity in Oaxaca’s living room, the Zocolo. This was a protest for social justice and the release of political prisoners.

Murals all over town express political objectives and injustices.

Oaxaca is a wonderful mix of old and new, with so much to enjoy and also a kind of restlessness that says “go ahead and enjoy but don’t forget what is bigger and deeper.”  This is one place that ain’t gonna pay for that fucking wall.