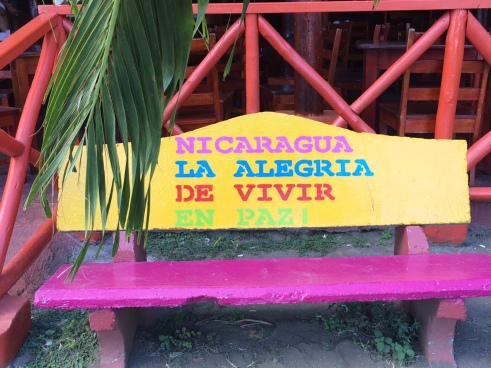 “The joy of living in peace”

The tour books say there is not much to see in Managua, Nicaragua. This sounds like an invitation. I like to look for what’s beneath the surface, whether the surface is sublime or funky. There are always secrets and special somethings everywhere you go, right?

Hugo Chavez memorial in a central plaza. Another reminder of socialist leaders south of The Border.

And you start at the beginning so, on my first morning in the city, I set out to see the two things you are supposed to see in Managua. The first was the Puerto Salvador Allende, a restored commercial area  designed for walking and eating and enjoying beautiful Lake Managua.  I could get lunch with a view of the lake and check out Nicaraguan handcrafts.

I’d hadn’t found much background on Nicaragua in the usual places but I assumed that it is no accident that this recent public project is named after Salvador Allende, the democratically-elected Chilean socialist leader taken out by the CIA in 1973.  Good assumption. Revolution is a theme in Managua’s public places. Maybe you know that the US backed the brutal Samoza dictatorship in the 20th century, which was eventually ousted by a popular uprising. The US military then spent $1 billion supporting the right-wing “Contras” as US taxpayers were having their social safety nets dismantled.  Contras (Ronald Reagan and the CIA) vs Sandinistas (Nicaraguan people and national sovereignty). Over the past 35 years, the right and the left have been in power at different times, but the Sandanistas have been in power since 2007.

Getting back to my trip to the Puerto dot dot dot I waved down the first cab that stopped outside my hotel. The driver said the fare across town was 80 cordobas, less than $3. As I climbed in, I was excited about how easy it would be to “overtip” but unable to find any evidence of an operational seat belt. Fearing the rickety car door might swing open at any time, I moved to the middle of the back seat.

I wasn’t expecting much one way or another on that ride but it was depressing. Garbage in various stages of decay lining the sidewalks, block after block of corporate fast food joints and nondescript buildings on the verge of collapse next to strip malls. A bony horse on the roadside picked bits of brown weeds out of the dust. The taxi driver had eaten an orange a week before and left the peels on the dashboard. 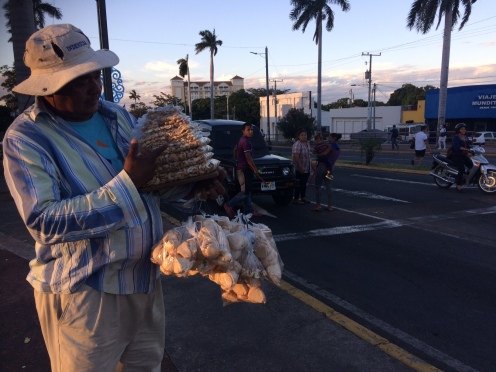 After about 15 minutes, the taxi stopped at someone’s (I read it was the Vice President’s) idea of public art, featuring very tall fake trees and other tall metal things. The driver pointed to a small wooden kiosk where I paid about $.30 to get into the Puerto, a ticket pricing strategy that I assumed was designed to keep poor people out. But they aren’t missing much. A quarter mile of casual restaurants with palm frond roofs, a children’s playground and a walkway to nowhere. Not many trees and none of them located strategically if you are trying to stay out of the intense sun.

The faux-cheerful entry to the Puerto Salvador Allende obscures a beautiful view of Lake Managua.

I am sure there are descriptions of Puerto Salvador Allende that use words like “charming palapas” and “sizzling fish on open grills” but I would call that “spin.”

Maybe the Puerto is so much more fun after work hours when the sweethearts and families are there, but I’d had enough after about 5 minutes. I headed back toward the kiosk and turned left out the gate toward the other thing you are supposed to see in Managua: the Plaza de la Revolucion, home to the old cathedral and the national palace.

Roped off, gutted inside. 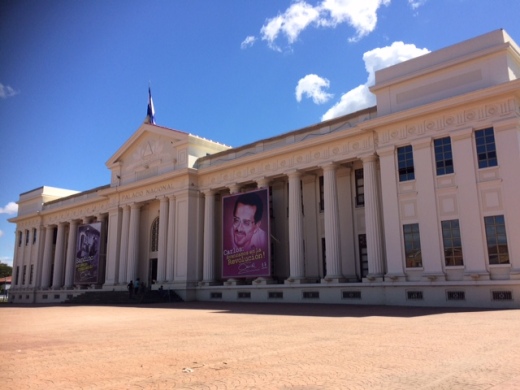 The National Palace. Still not feeling the love.

Is there a museum somewhere? Public art? Good food? Where is everyone? I was too hot for secrets or surprise somethings. I settled myself in the middle of the back seat of another taxi, satisfied to be leaving the city the next morning. 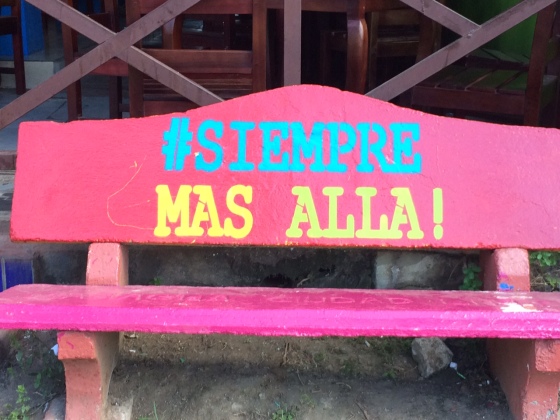 Another park bench in Managua — literally, “always beyond!”

When I got back to my hotel room, I did a little research. And there is some good news about Managua. In the past ten years, the Sandinistas have apparently done a pretty good job of putting their socialist principles to work. Nicaragua has more equality and less poverty. Literacy has improved dramatically and violent crime is way down. The country has an aggressive program to install alternative energy and is working on improving women’s rights.  https://www.huffingtonpost.com/dan-kovalik/sandinista-revolution_b_1265367.html.

So maybe Managua is not all that great for tourists but there are a lot of people here who probably think it’s a lot better for them than it used to be. But, as always, it’s complicated. https://www.theguardian.com/commentisfree/2016/aug/24/nicaragua-dictatorship-sandinista-ortega-murillo 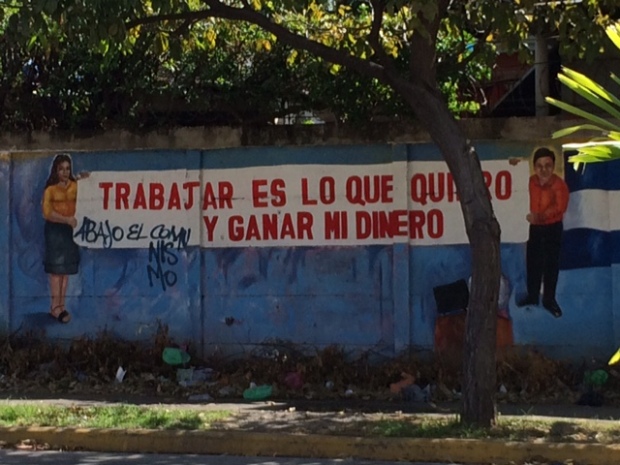