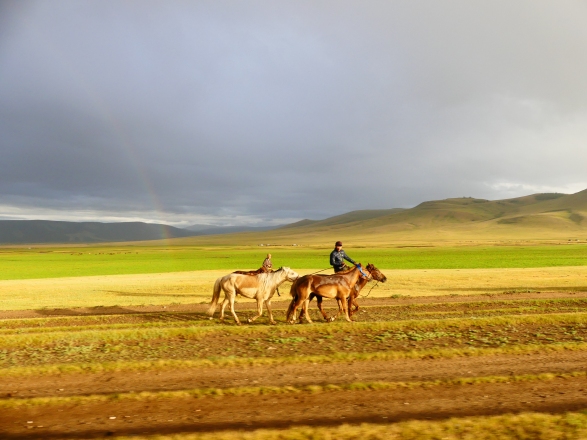 I am a little embarrassed to say that I didn’t know Mongolia was a country until I decided to visit. I guess I assumed it was a region that was part of China and part of Russia. But Mongolia is a democracy with a president and – since the Soviets pulled out in 1991 – it has a mixed economy. It is unlike any place I have ever visited. 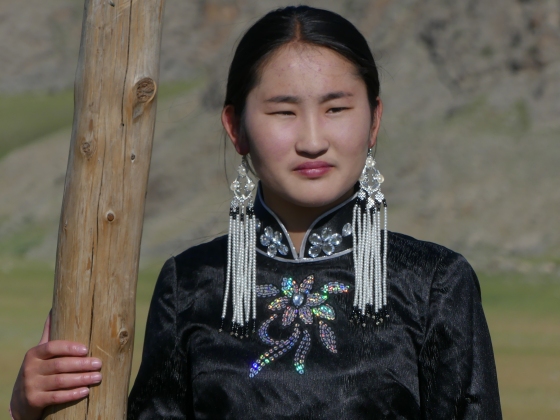 Mongolia is a country of true nomads and is the most sparsely populated nation on earth. Except for the 3 million who live in greater Ulaanbaatar (yes with five “a’s”), most Mongolians live in the vast expanse of the steppes or the Gobi Desert. They live in tents called “gers” and move them when their herds of sheep, yaks, goats and horses have exhausted the grassland food supplies near their encampments. 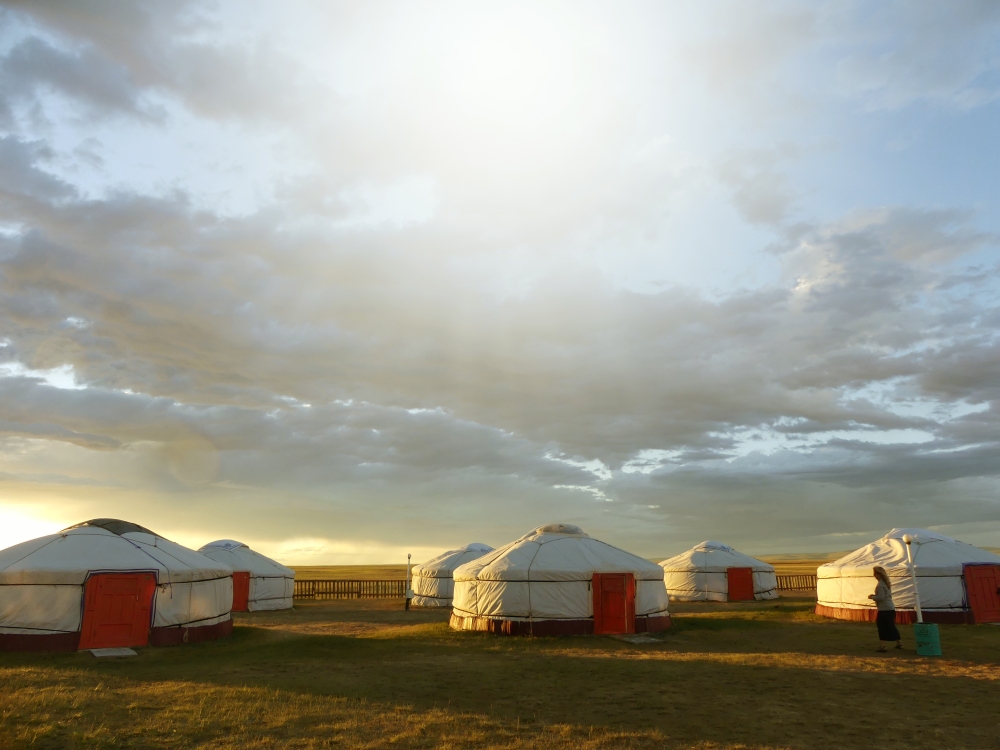 Our ger camp on our first night of travel.

Which is related to at least the second most important fact about Mongolians. Mongolians are horse people through and through. When I asked Nomin, a young Mongolian living in Ulaanbaatar, whether she rides horses, she replied “Of course. I am Mongolian.” I asked 20-year-old Liam, who has spent most of his summers in Mongolia, whether he had competed in the grueling annual long distance horse race for 12-year-olds, he replied “Of course. I live in Mongolia.” Horses are prominently depicted in old and modern art, in the country’s emblem, and in movies and literature. For nomadic Mongolians, horses provide not only transportation across the vast steppes, they provide companionship and sustenance in the form of dairy and meat products.

One of the early finishers in a long distance race at one of the many Nadaam festivals that occur every year in July.

There is a revival here of Mongolian-ness since the Soviets left, and a big part of that is Genghis Khan. In the 12th century, Genghis Khan amassed the largest empire in the history of the world using ingenious military strategies that did not include much you would recognize as mercy.   On the other hand, he adopted and implemented freedom of religion and figured out how to manage an empire that extended from Hungary to eastern China without an office — so he is worthy of respect if not love. Although the peace-loving Mongolians love him. 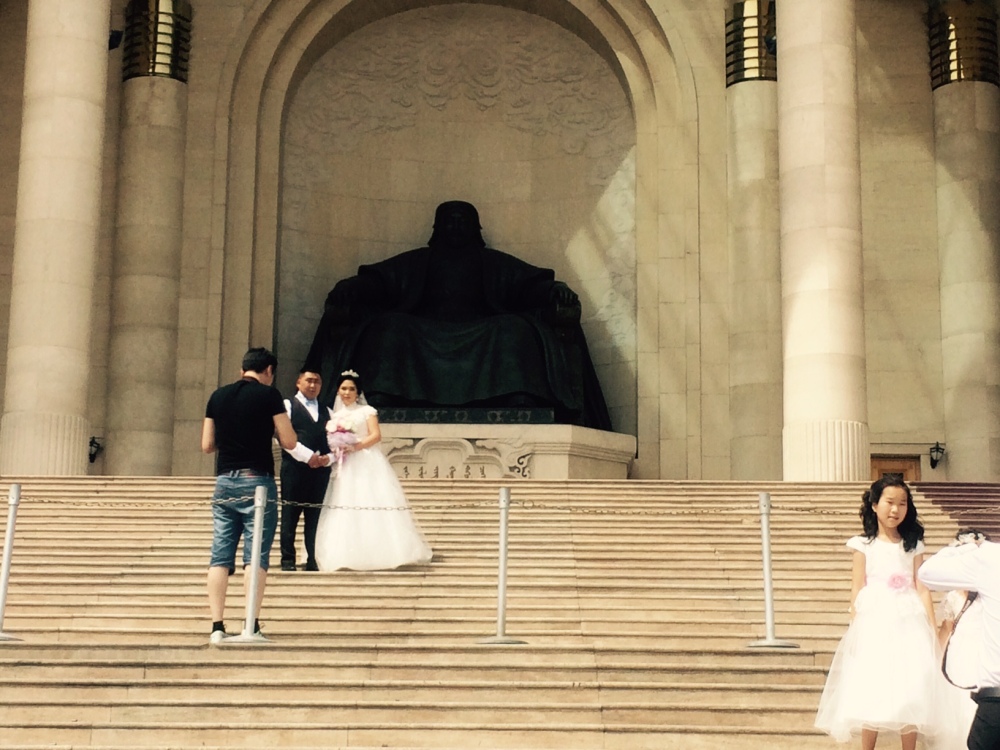 Another part of the cultural revival is Buddhism, which originally took hold in the 15th century. During the 1930s, the Soviets destroyed most of the Buddhist temples and murdered tens of thousands of Buddhist monks and priests.

Today, Mongolians are returning to Buddhism even as the country modernizes and becomes more integrated with the global economy.

One of the few remaining Buddhist temples in Ulaanbaatar. 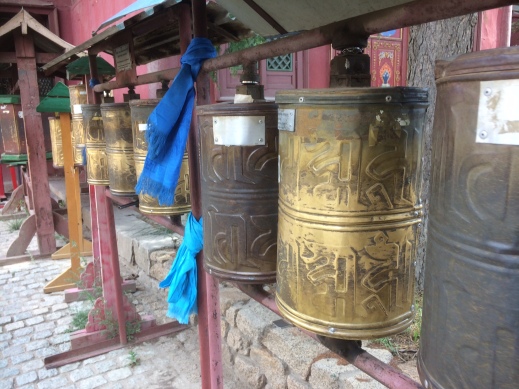 Shamanism is an important part of the culture as well and is thought to be older than human history. We were privileged to meet with a 19 year old shaman who realized his calling at age 13.  Following a moving chant to a drumbeat, he entered into a trance that allowed him to communicate with important ancestors. 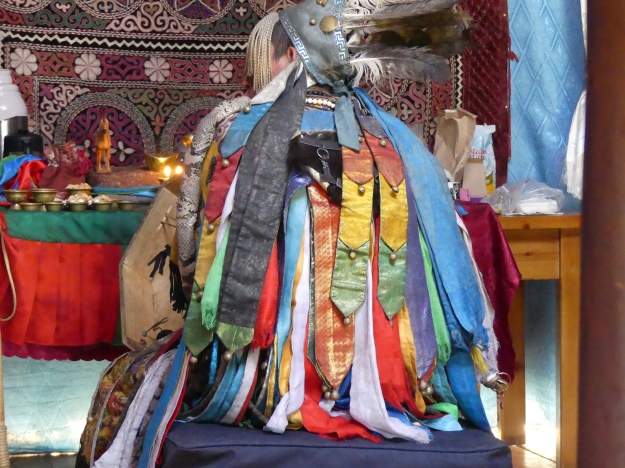 Mongolia – mainly Ulaanbaatar — has unfortunately been making news because of its terrible air pollution, which is especially bad in winter when householders burn wood, coal and animal dung to keep warm. It’s an issue here, along with the fair disposition of the revenues from the development of large mining projects and the impacts of climate change, which have forced thousands of nomads to move from the Gobi Desert north to Ulaanbaatar 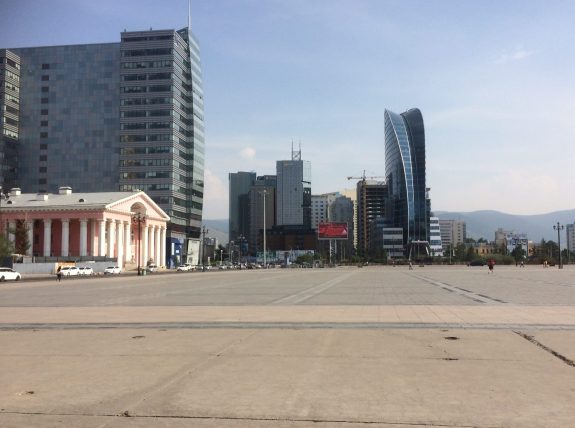 View from Ulaanbaatar’s Sukhbaatar Square. The city is a pastiche of architecture and outlook.

I am here to join a horse trek with 12 other Americans and we have just spent our first night on the steppes, where the sky is endless and that settlement next door is miles away.

Camel ride on the road to Lapis Sky Camp

So far, we all seem to be feeling the power of the land and the sky.