Not what I expected. As follows….

The City Center.  I expected onion domes and the heavy Soviet architecture called “Stalinki.”  I expected gray and tired.  I didn’t expect to find that Moscow’s city center is sparkling and surely the most elegant public place I have ever visited.  It is full of historic and beautiful architecture, dramatic lighting, large boulevards and quiet backstreets. The city center is immaculate and “tasteful” — no neon or other obnoxious advertising.  No stray cats or funny smells. Few smokers. In some ways, it is more Paris than Paris but, unlike Paris, strangely hard to read. I am working on that…. 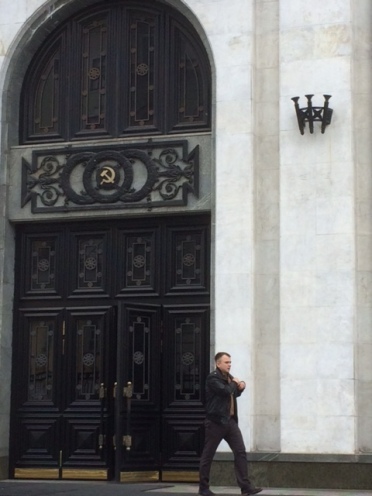 The only Soviet hammer and sickle symbol I saw.

Thousands of historic buildings in the center are lit up at night. (stock photo)

The Bolshoi.  I expected tickets for the Bolshoi Ballet to be expensive and they are.  At almost $300 a seat,  I am just not worth it.  But I didn’t expect to be able to see — or afford — an opera at the Bolshoi. My fourth row center orchestra seat to Puccini’s divine “La Boheme” cost $30 and the performance was  excellent. 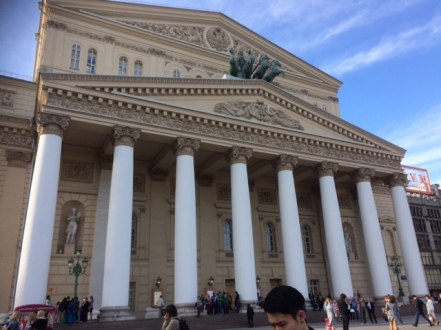 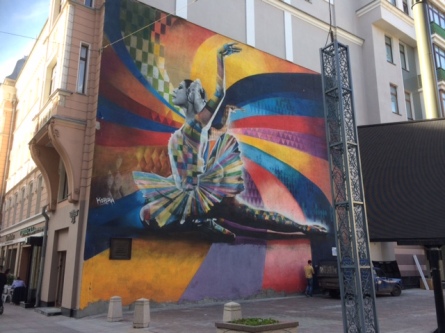 The closest I got to ballet — and one of the few examples of wall art in the central part of the city. Of course, it’s not graffiti.

The Art.  I expected great art in St. Petersburg but not in Moscow.  Moscow’s Pushkin Museum, however, has an eye-popping collection of 19th and 20th century European art.  I saw one of my favorite Matisse paintings as well as my favorite Chagall painting.  And a lot more — Van Gogh, Picasso, Degas, Monet and Cezanne to name a few. There is also a thriving modern art scene here. 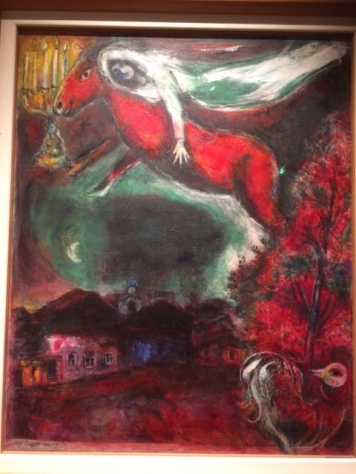 I don’t know how this photo of my favorite Chagall got so lopsided. 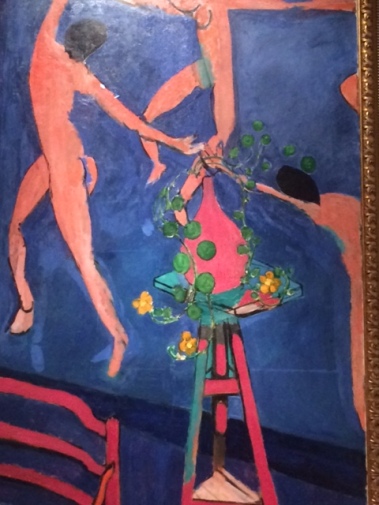 The Music.  For some reason, pretty much every restaurant and bar in central Moscow plays techno pop.  I think I have decided I would rather eat nails in peace than eat borscht to a synthetic droning thump. The city feels more like Tchaikovsky.

A nice break from technopop in the Tverskaya neighborhood

The People.  I expected Russians to be reserved and businesslike, which they seem to be, although generalizations are not very meaningful after a week of being a tourist.  And I have been lucky to get to know a very warm and friendly Russian family.  My Bay Area friends, Steve and Laura, introduced me to Jane, a young Muscovite who knows an amazing amount of history about the city. She and her parents, Irina and Alexander, have been wonderful hosts. Irina is director of Human Resources in one of the state agencies and Alexander is retired from his business managing tours.

Jane took me to the iconic Pushkin Cafe for lunch, which must be the only place in Moscow that doesn’t. play. bad. music. 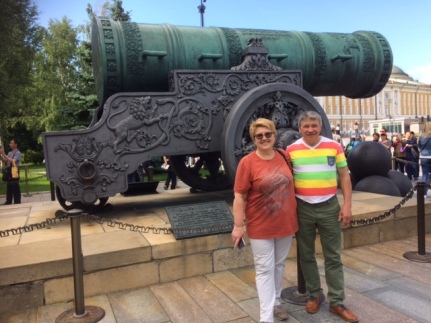 Irina and Alexander took me on a tour of the Kremlin when Jane was at work. They don’t speak English but we used translator apps.

Unexpected and out of character but I love it.

Moscow… how many strains are fusing in that one sound, for Russian hearts! what store of riches it imparts!