I have had a theory for a long time. I have told a few people about it.  Some try to look interested.  I have tried to explain it in long emails to professors at various universities who refer me to someone else who doesn’t reply.

My theory requires many leaps of faith on subjects related to three complex disciplines:  quantum physics, genetics and religion.  I know little about any of these disciplines, which may cast some

And actually, it is a stretch to claim I have even superficial knowledge in these areas of inquiry.

It all started in 1993 at Zion National Park. I was visiting the Park with a brainy doctor would go anywhere on a moment’s notice (he subsequently climbed Everest, ran the Boston Marathon and developed new protocols in obstetric anesthesiology while I was coming up with my theory). On a sunny afternoon on the deck of our hotel, overlooking one of the most beautiful places on earth, I read Chapter 3 of Fritjof Captra’s the Tao of Physics

. I will always remember this as one of those wow moments in my life.  The basic premise of Capra’s best selling book is that quantum physics is increasingly explaining the universe in a way that sounds a whole lot like eastern philosophy, that is, metaphysics. Much has been written about this since 1993. Even the Dalai Lama wrote a book about it, titled “The Universe in a Single Atom.” The short version:  reality is not a bunch of independent objects and events with relationships to each other on a one way timeline.  It is a continuous uninterrupted whole of simultaneous energy.  There is an implication that the universe is the same as consciousness.

If you haven’t s

tudied quantum physics, this is a lot to swallow but please apologize to the critical part of your brain for a few more minutes.  I am also very confused.

Then a few years ago, I read a book and some articles about genetics. Thank you Sam Kean for writing “The Violinist’s Thumb.”  I was especially interested in a study that suggested, contrary to our previous understanding of inherited traits, an environmental event can trigger DNA change

So are you still with me?

And then there is what we call religion, or spirituality.  Humans have been compelled since the beginning of human history to subscribe to superstition or religion, or in some way practice some form of spirituality. Humans search for meaning and what we call the soul in different ways.  Some have worshiped fire and the hunt without particular dogma.  At the next level might be those who follow someone else’s dogma without a lot of independent thought, like Southern Baptists. And there are those, like the Dalai Lama, whose dogma is a sort of wisdom and willingness to incorporate all kinds of thinking — scientific and religious — to form complex ideas about the nature of existence. To name just a few. No matter what our spiritual beliefs, they trigger something very deep and provide a kind of gratification that is very different from, say, how we feel after eating pizza or buying a new car.

So to review the three important points: 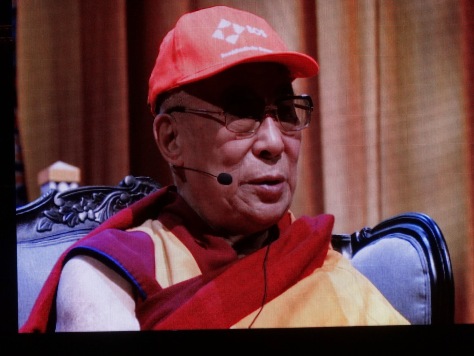 Number 1: Quantum physics increasingly posits that the universe is an uninterrupted whole and one with or similar to the concept of consciousness.

Number 2  Our genes have memory.

Number 3:  Humans are compelled to be religious, spiritual, to want to understand the nature of existence.

When you add them all up, they seem to suggest one big thing:

Probably this is not a new theory but I would like to know more if anyone knows more about it than I do.

I am not sure where to go from here. I welcome all suggestions.