This week, I visited the small town of Drogheda in the gorgeous Irish countryside about 40 miles north of Dublin. The town is near Bru Na Boinne, a UNESCO World Heritage site of  mysterious and historically important neolithic burial mounds. And then I became a junior falconer! 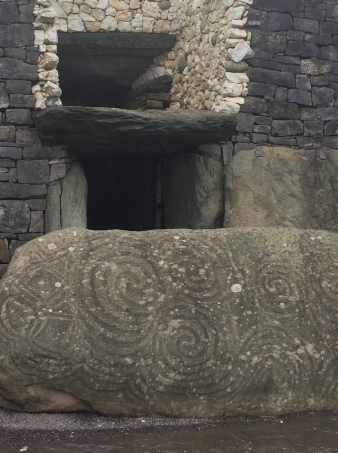 The carved kerbstone at the entrance to Newgrange, the most impressive of the mounds.

The giant mounds at Bru Na Boinne were built 5,000 years ago as burial places.  They have been compared to Stonehenge and the Pyramids for their engineering ingenuity and symbolic value to the people who built them. Like Stonehenge, the mounds at Bru Na Boinne demonstrate very sophisticated knowledge of astronomy. At the equinox, sunlight floods the chambers of three of the tombs. You can be there for that if you win the lottery. You would need to be one of 80 lucky people of the 12,000 who enter.

Some of the dozens of burial mounds in the valley are so large you could built a tea house on top of them. Unfortunately, someone did that once.

Almost as amazing as Bru Na Boinne was meeting very cool five women who are traveling together through Ireland. In case you think the world is a big place — three of them worked for a regulated public utility in California and one of them testified in my hearing room more than 20 years ago. (This is even more weird than meeting two young men in Armenia two weeks apart, both from Kabul, Afghanistan. One works at the American Embassy and one works at the British Embassy. And they know each other) 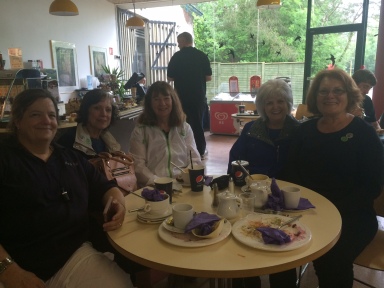 Kathy on the left recognized me and Susan on the right will be in Greece in August so we are hoping to get together.

And then I spent a day learning a little bit about falconry.  This was one of the highlights of all of my travels!

Falconer Brian McCann picked me up in his truck and we drove out to a giant hill of sheep overlooking thousands of acres of Irish farmland.  In the back of the truck — 3 owls, two falcons and two hawks.

Falconry is the art of teaming up with birds of prey to hunt.  It is believed to be a 4,000 year old partnership that began in Asia and then moved to the Middle East and Europe more than 1,000 years ago.  In Medieval England, your status in the community determined what types of birds you could own. Only an emperor could own a golden eagle.  A knave with a falcon could lose a hand for violating ownership laws.

This is Tom, a Harris hawk that is native to the Sonora desert in Arizona. He was my favorite. He had a lot of intelligence and dignity and was so free spirited. When we called him, he would always come — not because he was obedient but because it was his choice.

This is Romeo, a Lanner falcon from Pakistan. The hood is supposed to help reduce anxiety. We removed the hood and watched him hunt for awhile. He eventually got to eat a baby chick that Brian had for him.

This is Rosie the red-tailed hawk, a familiar species for Californians. She was a little leery of me at first because I moved my right hand in a way that was threatening to her. After about a minute, she gave the sign that she trusted me. The sign was that she stopped staring at me.

And here is sweet Tiny the Barn Owl who always made a point to say hello from his perch when we went into the truck for another bird.

Watching these spirited animals soar on the wind and then return to me gave me the feeling that I am part of a big family that worships dignity and freedom. What a wonderful feeling.

The soul has illusions as the bird has wings: it is supported by them.