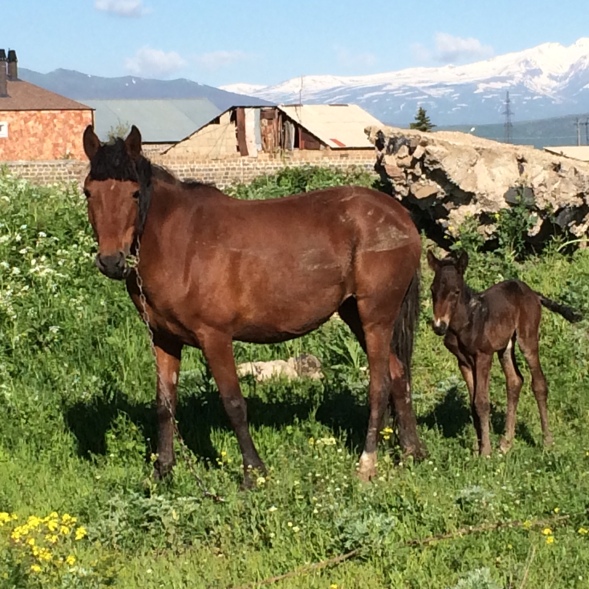 Newborn colt. His mama has the same haircut as many Armenian men.

The Armenian countryside is gorgeous. Rolling hills and highland valleys of farmland are framed by snow-topped Caucasus mountains.  This week, I spent a couple of days on a tiny farm in a tiny community called Fantan, about an hour north of Yerevan.  I had planned to stay a lot longer but my accommodation wasn’t suitable for my writing so my visit was short. 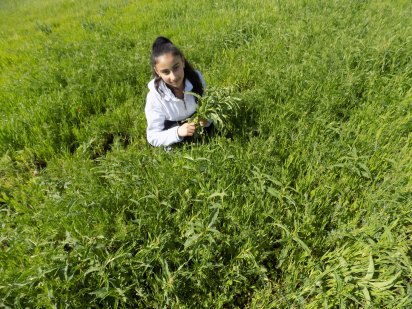 Emma on our walk in the hills. She is harvesting a flower that is used for cooking and which she eats raw because the stem is sour

Still, I felt close to the  family who lives on the farm because they are among the nicest people you can imagine.  Only two spoke English but we found ways to communicate.  Nver somehow understood my story about how I was part Armenian, which elevated my status immediately! I was fed (many times) a large assortment of delicious vegetarian dishes, mostly made from food grown on the property, including beets, greens, preserved fruits, potatoes, eggs, honey and every kind of dairy product.  Anahit makes her own cheese and Armenian yogurt.  Their son Vaagn works as a software programmer in Yerevan.

I also loved spending time with Gevorg, who is 14, and Emma, who is 12.  They were engaging and eager to show me around.  Emma does not speak English but we managed to “talk” using an app on our hike up into the hills. She studies Armenian dancing. Here is a video I took of her https://www.youtube.com/watch?v=9JwccujBKlE&feature=em-share_video_user Gevorg can speak English and took me to meet his Gramma, also named Emma.

These cow dung bricks, called “atar,” are used for heating and to fuel the “tonir” oven to make the Armenian flat bread called “lavash.”

The village of Fantan is very poor.   It has a single, very small market and few cars.  Older men and women tend sheep and cows in the hills and along the roadside. Although the village is a no-frills kind of place, there is one thing everyone seems to indulge in — lilacs.  Lilac bushes are planted in almost every yard. They are one of my favorite flowers and Laura used to bring me large bouquets of them on my birthdays.

Armenia’s 2008 census reported that the population of Fantan was 1,106.  But I would guess significantly fewer people live there today.  I should have just counted on my walk through the village, when everyone who wasn’t already out on the street was watching me through a window. I don’t think they have many visitors there!  Or maybe they thought I was a movie star because of the sunglasses.