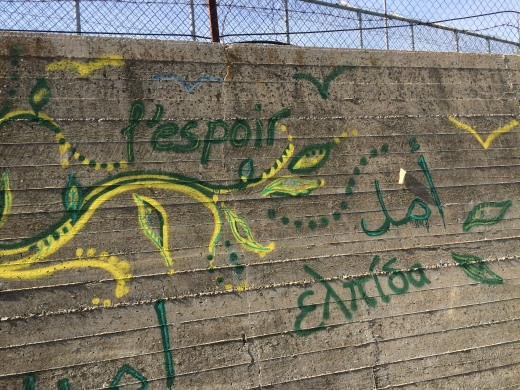 It is very hard to comprehend what has happened on the Island of Lesvos in a very short time. For more than a year, Lesvos was a place of kindness and generosity to half a million refugees.  Local residents and international volunteers scrounged up resources with almost no help from government or large NGOs.  Food, sanitation and shelter were inadequate but compassion and mutual understanding were in abundant supply.

During that year, there were no reports of crime or violence by the traumatized people who arrived on the island with practically nothing.  Local residents, volunteers and refugees have countless stories of mutual understanding and caring.

Inside Moria, Lesvos Island, Photo by The Guardian

All of that is changing with the agreement between the EU and Turkey.  What was kindness has been militarized. Compliant people have been handcuffed and held in prison conditions.  In 2015, the European Union did not support feeding or sheltering these people; in 2016, it is spending millions on riot squads, police and guns. The international community has sent a clear message:  “Forget about any protections you expected from international law and the richest people in the world. We don’t care about you.”

And with all of this it is no surprise that, for the first time, people are rioting. In a number of camps, fights have broken out between young men of different nationalities.  Refugees on the Greek island of Chios broke down the barbed wire fence containing them. More rioting is expected.

Riot Police escorting refugees to the ferry to Turkey. Photo by The Guardian

Today, hundreds of people on Lesvos were put on a ferry to Turkey, each one accompanied by a Frontex guard.  The people of Turkey are protesting because they don’t want them. The refugees who will be sent back to Turkey — every single one of them returned to Turkey — will have no right of asylum and may not legally work.  Turkey has no known plan for the health and security of the people who are returned. It has already started deporting refugees back to the war in Syria and Taliban-infested Afghanistan, in contravention of the international agreement with the EU and international law. Turkey will receive $6 billion for its role in this.

There are so many ways the current actions of the EU violate laws and treaties designed to protect people who are persecuted and victims of war. Those laws and treaties were adopted shortly after the last time Europe and the US turned away refugees of war: 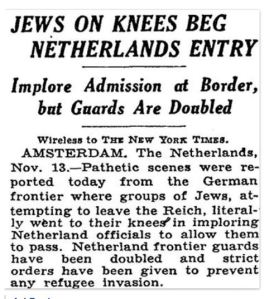 In recognition of the inhumanity of what is happening, the large NGOs and the United Nations have withdrawn support of the military operation at Moria, and I believe the NGOs have made the right decision. But some of us have found ways to quietly support the people imprisoned in Moria who are not getting essential items from the military.  After an anonymous person (it was Shaman) gave me the phone number of a contact inside Moria this week, I have been delivering car loads of  hygiene products, tents, toys, and baby formula.  Some of it is donated by…well, you can guess.

Photo by the Guardian

One of the NGOs that remained working inside Moria is an American Mennonite group called “I58.”  I asked the person who has been taking my contributions what I58 means.  He said it is a reference to Isaiah, verse 58, which says:

Is it not to share your food with the hungry
and to provide the poor wanderer with shelter—
when you see the naked, to clothe them,
and not to turn away from your own flesh and blood?
Then your light will break forth like the dawn,
and your healing will quickly appear;
then your righteousness will go before you,
and the glory of the Lord will be your rear guard.
Then you will call, and the Lord will answer;
you will cry for help, and he will say: Here am I

The island of Lesvos is covered in wildflowers.

“Whatever one sows, that will he also reap.” (Christianity, the New Testament, Galatians 6.7

“Anyone who works righteousness…we will surely grant them a happy life in this world, and we will surely pay them their full recompense for their righteous works.” (Islam, Koran 16.97)

“For they sow the wind and they shall reap the whirlwind.” (Judaism, The Old Testament, Hosea 8.7)