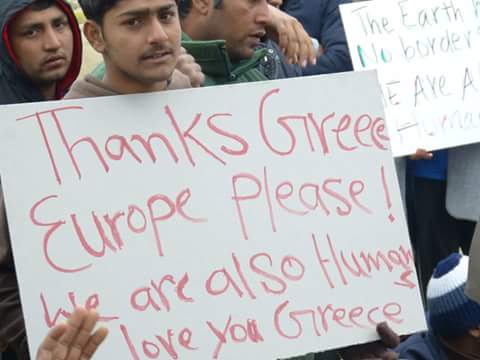 Martin Luther King said “The Arc of the Moral Universe is long but moves toward justice,” expressing the kind of hope that keeps us fighting for our children and something bigger than ourselves.  The international agreement between Europe and Turkey that treats more than 3 million lives as a commodity is not moral, as the unfolding events here in Greece have already made clear.

Thousands of refugees on Lesvos have been rounded up like sheep and taken from the people and infrastructures that have been supporting them with food, medical, clothes, blankets.  No one knows where they will go or how they will be supported. The refugees — a third of whom are children– fear deportation and abuse and hunger.  I have learned how important a small bar of soap can be when you are miles from a store and smugglers have take every last cent of your family’s savings.  I have learned how much a 30 cent razor can mean to a man who is trying to maintain his dignity.  I have heard young men say they will die rather than return to Turkey.

So far, the Greek authorities appear to have handled this mess as well as they can. We have heard of no aggression from the Greek army or the island police. The people of Athens, who are struggling themselves, are out in droves providing food and clothing to the refugees who have arrived in their city.  In spite of the uncertainties about their future and their disdainful treatment by the international community, the refugees continue to be calm and polite and grateful.

If the refugees and migrants coming to Europe were white, Christian, and western, their lives would not have been bartered away behind closed doors and described with euphemisms.  We remain a racist world, fearful of differences, and our children will pay a high price. By isolating young people in camps, without education or work or hope, we are creating a generation that will be vulnerable to the people we call our enemies, who will provide them with resources and a false and tragic sense of purpose,.

I am on my way to Athens for a week to try to help.