Outside the gate at Moria refugee camp.

During my first few days back in Molyvos, I have been settling in and trying to find my Greek center.  I am staying in a small traditional cottage just outside of Molyvos next to a grove of olive trees with sheep — the two staples of the Lesvos landscape.  It is quiet and comfortable and adorable.

The mood in Molyvos is quiet and a little restless because the boats aren’t coming in on this part of the island. The Turkish government has been patrolling the coast across from Molyvos so the smugglers moved their operations. For now, the boats are arriving near Mytilene, 40 miles south.  By Sunday I was restless too so I decided to deliver food to the refugee camp at Moria.  There is never enough food for the refugees here. The island produces food in abundance but the refugees are not usually close to where it is available.

My cottage at Villas Elpiniki, which means “victory through hope.” Everything here is a reference to something humanly noble or mythologically noble.

I set out on the 40 mile drive through the hills of olive groves with sheep listening to a radio station that plays traditional Greek music. It was a gorgeous day and, on this visit, my rental car has a working reverse gear, headlights and insulated floor boards (thank you Gabe!).

At Kolloni, a small town at the half way point, I stopped at a bakery and offered to buy all of the day old bread. The owner filled three large flour sacks with bread and giant Greek pretzels, and thanked me for helping the refugees.  He could not be convinced to take my money. At subsequent stops, I bought 80 pounds of fruit at three different markets. Volunteers patronize as many businesses as possible to spread around the benefits of their purchases in this very depressed economy.  The proprietors of all three markets gave me discounts I didn’t ask for.  This is Greece.

I arrived at Moria in the early afternoon, which I expected would be very crowded since a lot of boats had been coming in and the ferries were not moving people to Athens. Athens is bursting with refugees because the closing of the Macedonian border is backing up the procession all along the path from Turkey.  On that Sunday, however, Moria did not appear to be significantly overcrowded.  As usual, the feeling was calm and the people there were polite and patient, even though they do not have adequate food, shelter, hygiene or much in the way of optimistic futures.

After parking the car, I wandered around to find someone to help me carry the fruit and bread up the hill. Everyone at the volunteer tent was busy. One was watching two children separated from their parents. Another was trying to reassure a man asking about the medical condition of his son. So I went to the food tent. Children and parents hovered outside, mostly sitting in the dirt on the shady side of the tent. There are not many places to sit at the camp other than dirt.

I ducked inside through the tent’s door flap and found eight young volunteers who were preparing lunch.  They were cheerful and organized, obviously a team.  On top of a long counter they had lined up about 100 paper coffee cups. Each was half-filled with rice. A hard boiled egg sat on top of the rice. Two slices of folded white bread were tucked into the cup around the egg. 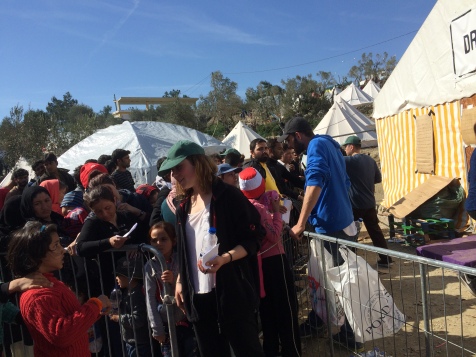 The line for dry clothes at Moria. Actually, it is about a quarter of the line. Most of the men stood in bare feet.

Before I had a chance to explain that I had food, a couple of children wandered inside the tent.  One of young men approached the children waving his arms, “No — out.  You must wait until 1:30. Twenty more minutes.”  The children headed for the door eying the boxes of bananas in front of the counter. One of them glared at me, daring me to intervene.

I asked one of the young men whether I could hand out fruit to those waiting for lunch.  He replied “Be aware that you might be creating an unfair situation if you do not have enough for all. They will have lunch soon.”

He was probably right, but no rule could create any kind of fairness for the people stuck at Moria.  There is nothing fair about being destitute even when you are offered the same amount of rice as the destitute person next to you.  And it wouldn’t be fair to leave Moria with 80 pounds of fruit in my car just because it wasn’t enough for everyone.

Walking back to my car, I found two women who agreed to help me get the fruit. Diane and Stella had just arrived from San Francisco (and we would become friends after a chance meeting the next day). On our way to the food tent with open boxes of fruit, I made eye contact with everyone who would look at me as a way of offering to ease the hunger for the 17 minutes before lunch.  The young men who were gathered in small groups declined, as they often do.  As I walked toward the food tent, several children ran toward me and eagerly took apples and oranges. Mothers made a point to thank me and took pieces of fruit for toddlers. When the women and children moved away, a few older men asked whether there was extra.

Being here raises so many complex issues and requires each of us to question our motives. Ultimately, they are all selfish. Being a small part of the humanitarian efforts here — or even just a witness to it — creates a feeling of hope for me.  Even more, I am here because of what I learn when I interact even briefly with courageous people in crisis. I am so grateful to be here.

Here is another visitor on Lesvos, Ai Weiwei, the Chinese artist who recently covered the columns of Berlin’s concert house with  14,000 orange life jackets.