I am  spending my last three Thailand days in Bangkok because  I didn’t get quite enough of it when we were here a few weeks ago.  I am staying in a charming guest house located on the canal a few blocks from iconic Khao San Road.

The neighborhood is an unusual combination of old Bangkok and uber-touristy — funky buildings and alleys, street food on every corner, and grannies hanging out on stoops in comfortable co-habitation with back packers, flash packers and the tourist infrastructure to serve all tastes and budgets.  The smells in this neighborhood are fantastic  — curries, barbecue meats and sweet rice desserts from the hundreds of food stands.  Around the several temples, perfume-y jasmine flower wreaths hang from motorcycles and iron gates, and incense burns in pots along the sidewalks. (The photo on the banner shows the iconic feet of Wat Pho’s giant reclining Buddha)

View of the old canal from my hotel room.

I must be going native. I almost didn’t notice this.

Alleyway behind the canal

This woman sits on the sidewalk and mends your clothes. She fixed a hole in my blouse in about two minutes.

On my first morning at breakfast on the hotel patio, I looked out over the canal and was shocked to see an alligator (???). I stifled my instinct to scream for someone to call the police(???)  and wisely proceeded to wave my arms around in animated disbelief. This delighted one of the young men on the hotel staff who said the beasts come up the canal every morning and are affectionately called “water monsters.”  I learned later that this is a play on words.  They are water monitors. And as a protected species in Bangkok, they are probably the only thing in town that doesn’t end up on the dinner table.  The whole episode reminded me of the time Vic called the Audubon Society when he spotted hummingbirds in San Diego. 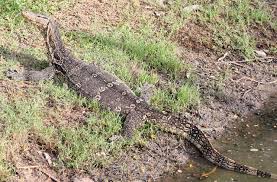 After the excitement of the water monster siting wore off, I walked to the National Museum about 10 blocks toward the river.  By 9am, the temperature was approaching 100 degrees with 90% humidity so  I couldn’t wait to get into a nice air conditioned museum. Well, it was nice but the only exhibit with air conditioning was the one congratulating members of the royal family for their good deeds, which didn’t interest me since I have been to several such exhibits in other places.  The museum otherwise provides a passing overview of Thailand’s culture and history.  Because so much of Thailand’s culture and history is woven into the fabric of its communities, most of it felt very familiar.

Coincidentally, most of my favorites were right next to fans.

A few of the many buildings at the National Museum. It was pretty good, needs some creative curating.

This was not near a fan but I really liked it anyway.

Based on my non-scientific survey, most Thai Buddhas have smiles.

For lunch, I walked to what I had heard was one of Bangkok’s best restaurants, Krua Apsorn.  When I arrived, I thought I had made a mistake.  It looks pretty much like every other small restaurant in town with an unassuming store front, peeling linoleum floors and cheap metal tables.  After walking for almost an hour, I was hoping for more than a watery green curry but I sat down in a quiet corner.  Good decision!  Krua Apsorn is a treasure.  Its small menu is both traditional and inventive, with dishes that are full of complex flavors and textures.  I learned after returning to my hotel that Krua Apsorn has been recognized by the world’s food critics.  The London Observor listed it among the 50 best places to eat in the world and the New York Times called it “worth a trip to Bangkok.” (Cheryl….).  Success hasn’t spoiled this eatery — no trendy updates to the decor or waitresses who look like they are fresh off the runway.  It’s just a wonderful old fashioned Thai restaurant with a lot of talent in the kitchen and some good ideas.

Krua Apsorn is a favorite of the King and Queen of Thailand.

On the left, large chunks of crab cooked in yellow chilies, kaffir lime and fresh green beans. On the right, a papaya salad with cilantro and peanuts. No rice — I didn’t want to water down the other stuff!

Yesterday, I needed a project so I took a cooking class called “Cooking with Poo.” In the Thai language, this name is not funny.  But the school’s proprietor, Poo, knows it is funny in English. At first, the name was a liability for Poo’s business but she stuck with it and now she thinks it has become an asset.

Poo grew up in the slums of Bangkok and as a young child sold homemade food in front of her house to the neighbors.  She worked 10 hours a day and usually made about $6.  At one point, people started coming from outisde the neighborhood for Poo’s food.  Eventually, she opened a cooking school and a small catering business.  Today, her cookbook is selling like hotcakes (on Amazon) and she has more catering business and cooking school students than she can handle. She has stayed in her childhood neighborhood and developed the Helping Hands project, which trains local youth English and cooking, and has supported the launch of 17 small businesses.  And she is still helping to wash the dishes after her daily classes!

And her class was fun.  We started in the local market.  Unlike our Chiang Rai market tour with Suwanee, however, a lot of the focus was on all of the weird foods eaten by Issans, a northern Thailand tribe related to Laotians. Many Issans live in Poo’s neighborhood and they eat anything (except the river monsters), including red ants, patties of coagulated blood, live baby fish and buffalo hide.

Poo prides herself in having tried everything in the market. But she didn’t like the cockroaches!

After the market, we spent a few hours cooking at Poo’s kitchen — spicy mushroom salad, pad thai, green curry with prawns and mango with sticky rice.  What was really special about these dishes is the number of wonderful herbs and spices we used.  We even made our own curry in mortar and pestle.  Poo kept our attention with wonderful stories of her childhood and the development of her business.

The aprons say “I cooked with POO and I liked it!”

I love Bangkok. It is so many contrasts — old and new, gentle and grinding, highly commercial and deeply spiritual, gritty and elegant, refined and raw.  I wake up to roosters crowing within walking distance to a Prada boutique. People work so hard and yet seem so relaxed.

All of Thailand seems to be a confluence of outliers that move in harmony. Maybe it’s the”jai yen,” the Buddhist principle of cool heart, where you accept your circumstances from minute to minute, save face, and let others save face.

“Khob kun ka” means “thank you.”  Thailand has been a magical part of my travels.