Unlike the other countries I have visited and most Asian countries,  Thailand has never been conquered, colonized or occupied. Thais proudly ascribe their historic independence to strong leaders, which is one reason they are pretty sensitive about the “The King and I”‘s portrayal of very popular King Mongkut, who resisted European colonization in the 19th century.

Unlike Yul Brenner, King Mongkut was not a backwards, narcissistic hedonist.  Among other things, he promoted science and technology, improved women’s rights, and developed a modernized educational system.  And Anna, who wrote the memoir that was the basis of the movie, was not his children’s nanny or close to the King.  I hope I will be forgiven for how much I loved the movie growing up and knowing every word of every song! 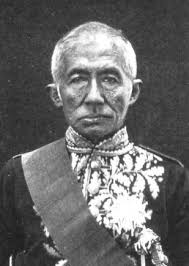 King Mongkut was a forward-thinking leader.

Romantic but patronizing and historically inaccurate.

During our last two days in Bangkok, Mags and I visited more historic places and a weavers’ workshop while continuing our search for the perfect massaman curry and the best deals in textiles.  Bangkok is the sacred and the profane — temples next to motorcycle repair shops, Buddhist monks in saffron robes walking beside tourists in tank tops, five star hotels hovering over alleys lined with street food stalls.  Although many tourists avoid Bangkok, we wanted to see more than we could squeeze into four days.

The reclining Buddha at Wat Pho is 45 feet tall and 130 feet long. It is beautiful.

A few of the many spires or “chedis” of the Grand Palace.

We wound our way through alleyways in an old neighborhood near the canal to find a traditional weaver’s workshop. This woman was the only one there and did not speak any English so we had to imagine some of her stories while she showed us how she works the loom.

This is the opposite of the important Thai principle of “Jai Yen” which means “cool heart,”or keeping your cool and saving face.

The tuk tuk drivers are a little crazy and there are no rules or seat belts but we laughed the whole way across town.

Last night, we flew to Chiang Rai in the far north of Thailand to continue our food and textile tour — more later!

Here we are sharing our hotel “welcome drink” on our way to the airport.

“There are no foreign lands.  It is only the traveler who is foreign.”