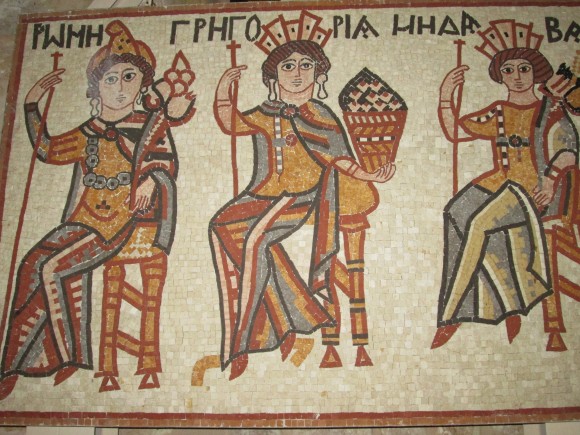 Since leaving Petra on Monday, I have been in Madaba, about 20 miles south of Amman. I was going to spend this time just north of Petra at a small BandB with horses. When I arrived at the property, I learned that there was no food service and nothing of interest for miles around.

Since I didn’t have a car and the horseback riding involved sheer cliffs, I returned to my hotel in Wadi Musa to regroup over an espresso. Concluding that I didn’t really have enough time for camel riding at a Bedouin camp or a Dead Sea soak, I asked the hotel manager to get me a cab for the 3 hour drive north.

Normally, I would not be able to justify paying for a 3 hour cab ride.  But my only other option was a mini-bus, which is a private licensed shuttle that is used mainly by locals.  I took a mini-bus from Amman to Petra last week. It was a white-knuckle nightmare with the driver texting, speeding, chain smoking, tailgating and, at one point, praying to Allah with his head on the steering wheel.  When I expressed my concerns to an ex-pat from Texas across the aisle, she chuckled and said “There are way worse!”  My cab ride to Madaba with Khalid was a peaceful, life-affirming experience.

Madaba is nothing flashy but it has an interesting history and a nice easiness.  Inhabited at different times by Romans, Byzantines, Islamic Umayyads and others, the city was leveled by an earthquake in the 8th century and abandoned until a Christian community returned in the late 19th century.  Because the city was uninhabited for so long, its antiquities are well-preserved.

Madaba is best known for its Byzantine and Islamic mosaics. Among the mosaics, the most important is the map of the Holy Land created in the 6th century.  It is the oldest known map of the region and is surprisingly accurate considering that mapping techniques at the time were not well-established. 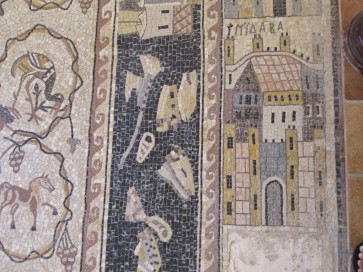 A corner of a huge mosaic on the floor of St. John’s Church, probably made in the 5th Century. Madaba is represented on the right. 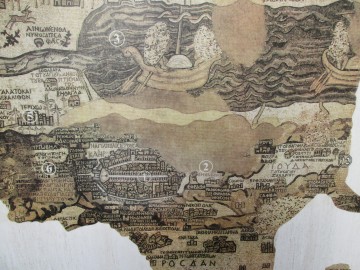 World’s oldest map of the Holy Land at St. George’s Church.  Jerusalem is where the 1 is shown.

About a third of the city’s 150,000 residents are Christian. Madaba is a pilgrimage place for Christians, mostly because it is close to Mount Nebo where Moses declared he had seen the Promised Land and is presumed to have been buried. 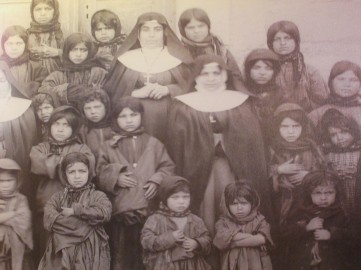 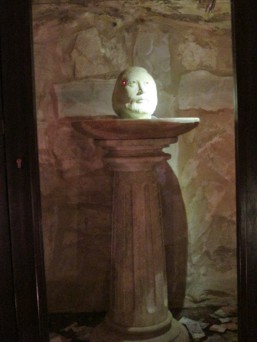 St. John’s Church honors its namesake by displaying this weird head with inspirational lighting. Remember that Herod beheaded St. John after Salome’s famous dance and subsequent request for John’s head on a plate. 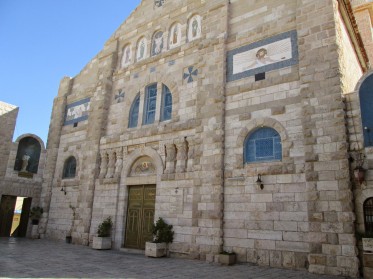 The walls of St. John’s Church are adorned with 19th century mosaics.

More than any place I have traveled so far, Madaba has been a bit of a challenge from the standpoint of eating well. Restaurants here permit and even encourage shisha smoking, which I just can’t stomach, and there isn’t much street food. On Tuesday, I decided to treat myself to an early dinner at Madaba’s nicest restaurant and the only one that does not permit smoking. This turned out to be my only “unwelcoming” experience in Jordan. After being greeted with a couple of ungracious comments, I was seated and then ignored, so I walked out. I licked my wounds with a falafel, which was mediocre, and bought a bottle of Jordan’s St. George Cabernet, which was fantastic.

I have enjoyed being in a small Jordanian town where tourism, while important, is not a central part of the local economy. 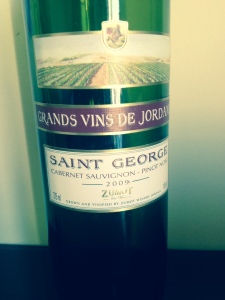 Jordan is producing some really good read wines in the area around Madaba and St. George wines are organic. 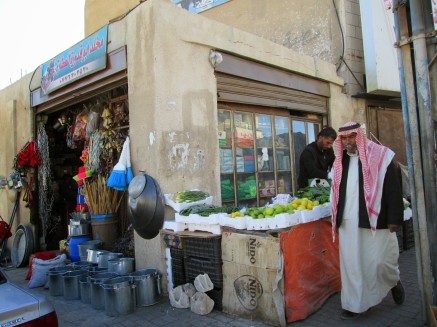 A typical corner market in Madaba. Jordanian Arab and Bedouin men  wear red and white “keffiyeh” or headscarves. The red signifies that the wearer is from a country with a monarch.  Jordan’s is King Abullah II. 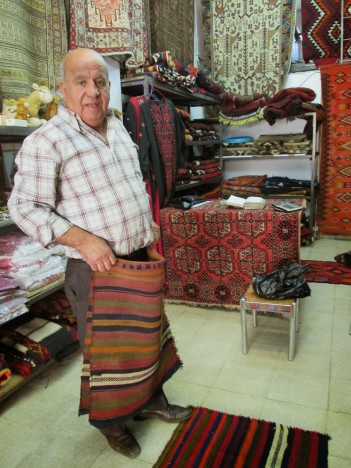 This is Wadi, who served me tea AFTER I bought a (very tiny) rug. Only in Jordan. 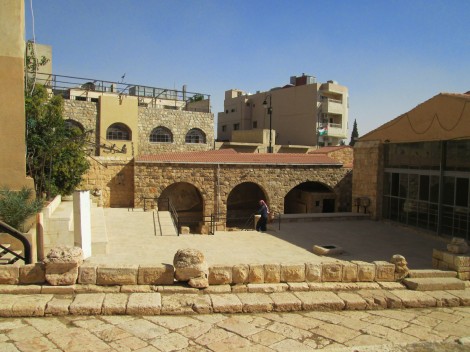 The man in the shadows is a cab driver who followed me around town for 3 hours trying to convince me to use his taxi service. It was kind of hilarious to have him pop up unexpectedly every third time I walked out of a museum or shop but it is an indication of how few tourist dollars are here now.

In the past week, I have learned a little about the status of Jordanian women. Jordan is signficantly ahead of some other Arab countries and follows the UN’s Convention on the Elimination of Discrimination of Women. So Jordanian women are entitled to work, vote, drive, run for office and go to school.  Although affluent Jordanian women are able to take advantage of these rights, many Muslim women live according to more traditional practices. Few Jordanian women work because in traditional households that would reflect poorly on their husbands. Muslim men may legally have as many as four wives. 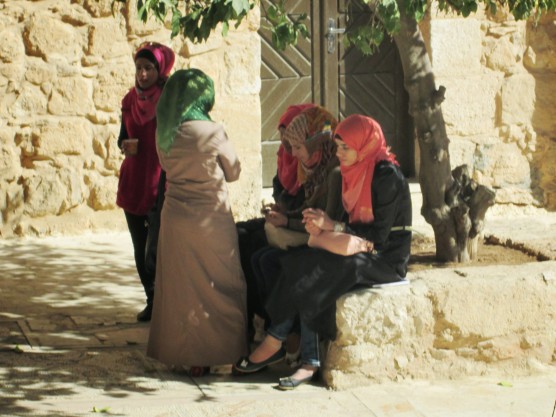 Although Jordan has achieved equality between boys and girls in terms of access to education, many Bedouin girls do not go to school. There have been occasional reports of women being subject to “honor killings”, which is not legal but receives significant popular support among conservative Muslims in Jordan, according to a study by the Pew Research Center.  In general, young women are more empowered than their mothers have been but recent trends toward more conservative Muslim practices may change this. On this and many topics, Jordan’s King Abdullah II has very progressive views and has advocated consistently for the education of girls and the elimination of gender discrimination.

Yalla yalla! Tonight I am flying to Bangkok! Shukran Jordan! 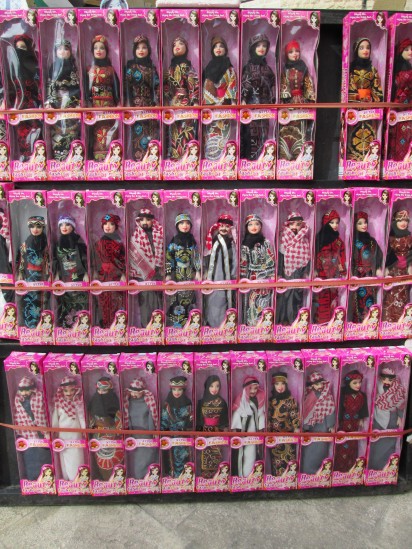