I decided to spend the day at the Israel Museum, which has a nice cross section of western art but is famous for the Dead Sea Scrolls and archaeological artifacts organized to unwind the 9,000 year history of the Levant. Steve Tobias reminded me of this word.

As I left the apartment, I asked a man in the alley how to get to the museum and he said he would take me there if I would wait while he strapped a board on top of his car.  I waited and we had a lovely chat in the car, and in fact he originally came from Philadelphia. His daughter just finished a post-doc at UC Berkeley’s law school (although he had never heard of Steve Weissman).  Then he said he would like to take me to a special place he had only shown a few people.  He spoke like a patrician about his travels and the house on his street where Golda Meir once lived.  Adding it all up, Vic, I didn’t think I had anything to worry about.

My new friend didn’t tell me his name so I decided it’s because he is somebody famous and controversial like Hagit Ofran from Israel’s Peace Now or left wing author Amos Oz.  Or maybe he just forgot his manners when I told him my name.  Anyway, the special place was an archaeological site next to an apartment building.  My new friend is standing on a pre-Jesus grape-stomping pad. The small reservoir on the left is where the juice flowed to be filtered and the bigger reservoir behind it is where the juice was poured into large jars to be aged into wine.

Thanks to my new friend Benjamin Netanyahu, I got to the museum with renewed enthusiasm, and stopped first at the museum cafe for coffee and a salad.  I sat down at an outside table and in front of me was a very poetic scene, with sparrows perched on top of a glass wall and the chairs across from me:

And then, before I could put my camera down, I realized I had finally found company for lunch!

I saw the amazing exhibit of the Dead Sea Scrolls, which include the oldest manuscripts of the Bible. The Bedouin shepard who found them in 1952 sold them to a collector for $37.  Then I spent a long time in the archaeological section of the museum.  Here are my favorite pieces, each representing a different period of conquerors or the conquered:

Canaan clay tombs. They were breathtaking. 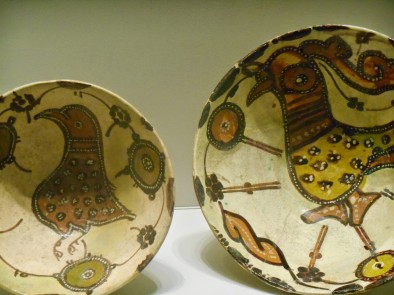 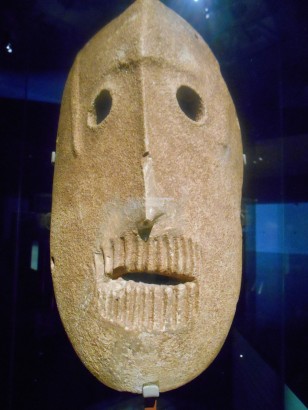 Judean clay mask — 9,000 years old and, with a dozen others, the oldest artifacts in the museum

Font from a Crusader church

I also went on a tour through an exhibit called “Dress Codes,” which had dozens of amazing outfits worn by Jewish women throughout the Middle East, mostly from the 19th century. 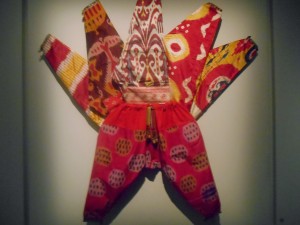 A bunch of pairs of baggy maggy pants with design in ikat and batik. These were worn under skirts. 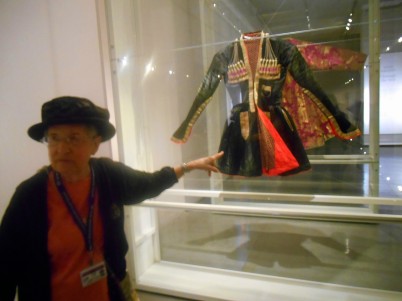 Tour guide Lila is showing a 19th century Israeli jacket that has about 30 slots for bullets on the chest. When I asked Lila why she moved here from New Jersey she said “Any place but here is just visiting.”

Tomorrow I am heading north for Rosh Hashanah in Safed (pronouced Sfot), which is the home of Jewish mystics.