I am in rural Louisiana this week to get some inspiration for the finishing touches on my novel. I have gotten some inspiration alright, but not the kind I was expecting. Truth is truly stranger than fiction, but if I tell you why, somebody might have to kill me. Joking. But it occurs to me.

After several days of exhausting revelations, I decided to stop thinking and go to a music festival, which are abundant around here

. This is “Cajun Country,” the heart of some of America’s best roots music.  Zydeco and Cajun. One is upbeat by its musical structure. The other is either wildly fun or plaintive or a waltz.

On Saturday morning, I headed north and then west out of Lafayette, where I am staying. The roads cut through through a vast expanse of flat farmland and occasional stands of live oak. The locals call this “The Prairie.”

There is no cell service once I leave the highway. The houses are ranch style, flat and square, evocative of the landscape, I assume not deliberately. The radio announcer is speaking Cajun French, which doesn’t sound like Paris, but occasionally I recognize a word.

My first stop is Mamou, a modest farm town whose notoriety is way out of proportion to its size, thanks mainly to Fred’s Lounge. Every Saturday since godknowswhen, the best Cajun bands in the area start playing at Fred’s at 9am and the only brunch selections on the menu are alcoholic. 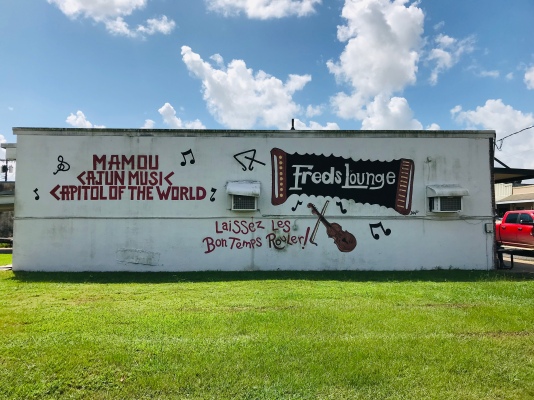 When I arrive at Fred’s, the band is playing a foot-stomper. We are all so happy at Fred’s but things are winding down before I get the courage to order my morning beer. This is probably a good thing considering my rental car has Texas plates.

I head over to Mamou’s 48th Annual Cajun Music Festival on the edge of town. This turns out to be a let down after Fred’s. The music is excellent but the venue is bright lights and folding chairs. The crowd is sober and sitting very still. I leave after the second song. 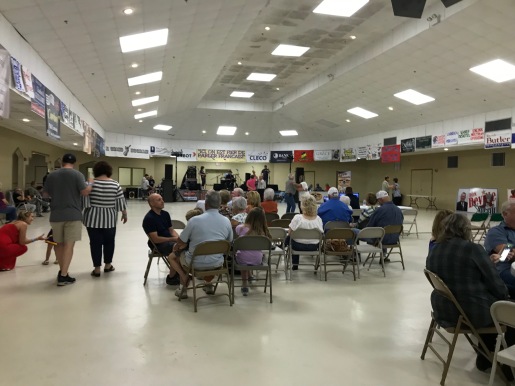 Down the road near Lawtell, I notice something is happening in a church parking lot, so I pull into the driveway. A group of bikers has gathered here. This time, the music is Zydeco and coming from the oversized speakers on one of the tricked-out Harleys. Everyone is laughing and waving as they head back out to the highway. 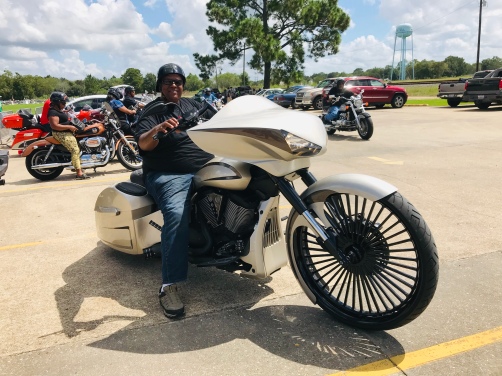 Next, I drive south to attend this weekend’s gun show, a test of my commitment to understanding humanity and one that I expect to fail. The confusion begins before I can park the car — the gun show is in an event center that doubles as a bingo parlor. I feel nervous, like I am guilty of something, but the women at the door seem happy to see me and I buy a ticket for $8. One of the women offers me a free raffle ticket. I check out the prize, which is a knife that could kill a bear. I suggest she give my ticket to someone else.

Inside, a couple dozen people are shopping. A table just inside the door is jam-packed with Nazi memorabilia. It is next to a table piled high with MAGA T-shirts. Some of the young people have brought their children, a family outing.

After checking out the silencers, I ask one of the gun dealers what kind of gun I can buy. He tells me that, as a resident from out of state (way out, I think), I can only buy a rifle. Handguns and automatic weapons would need to be shipped according to California laws, which are complicated. We agree that this is a good reason for me to hold off for now.

He senses my politics and tells me about the folly of passing new gun laws as I concentrate on my breathing. Just before he heads over to a potential actual customer, he says, “Anything bad you can do with a gun is already illegal.” I don’t respond, except in my mind.

In general, I don’t recommend going to a gun show when you are feeling anxious about something, but in this part of Louisiana, there is always more music.

The last stop on my tour was Buck and Johnny’s in Breaux Bridge and all’s well that ends well. Zydeco can cure whatever ails you. 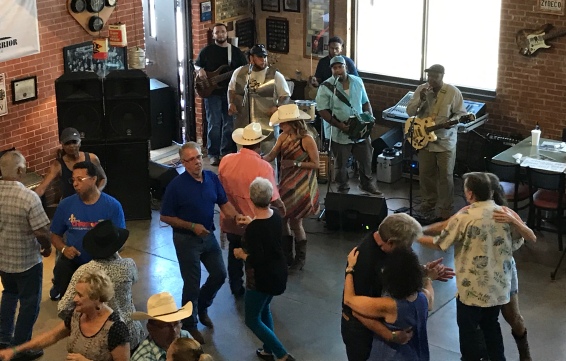