On my first day in Taiwan, I asked a young Taiwanese woman in my hotel what she thinks about Taiwan’s relationship to China. She looked the other way and lowered her voice to a whisper. The next day, my taxi driver eagerly downloaded his decidedly progressive political views until I asked him about Taiwan’s future. Then he paused and lowered his voice.

Because sometimes in life, the best way to deal with disagreement is to just keep a low profile and do what you want.

So it is between Taiwan and China. The short version is that Taiwan considers itself an independent country and China (and most of the rest of the world) considers Taiwan part of China. Taiwan is a democracy and China is decidedly not.

Taiwan’s modern history can be said to have begun in 1949, when Chiang Kai Shek (the Nationalists) lost the battle to control China to Mao Tse Dong (the Communists) and then took his cadre to Taiwan. Taiwan’s legal status was unclear even then, but Chiang Kai Shek ruled Taiwan with an iron fist for 25 years. Since his death, Taiwan has developed a democratic governing structure, its own style of capitalism, and its own laws. It has also developed a strong aversion to a lot of how the Chinese government does things. 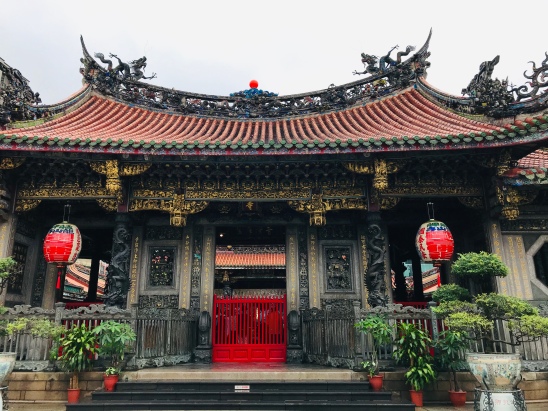 Popular Longshan Temple, bombed by the US in World War II. Did you know the US bombed Taiwan in WWII?

For its part, China has mostly left Taiwan alone but there are indications that could change, one of them being the developments this week in Hong Kong….

To summarize what you may already know, Hong Kong’s leadership has proposed legislation that would permit extradition of criminal suspects from Hong Kong to China. This move has motivated a million Hong Kong citizens to take to the streets. For them, the issue is not just the treatment of criminal suspects, but mainland China’s assertion of authority over Hong Kong. Most Hong Kong citizens don’t want to governed by China, with its authoritarian structure and human rights abuses.

Taiwan legalized gay marriage a few weeks ago — and there is a big presence here.

Taiwan’s leadership has objected to the legislation as potentially making it a party to China’s human rights abuses.

Other recent events are potentially destabilizing in the region. In an official document, America’s president recently referred to Taiwan as a “country,” which would be good for the Taiwanese if it weren’t a taunt that China cannot ignore. Last week, America’s president agreed to sell Taiwan $2 billion worth of military equipment. https://www.bloomberg.com/news/articles/2019-06-05/trump-administration-readies-a-2-billion-taiwan-arms-package

Confused and concerned in Taipei

And China is building up its own military presence only 30 miles off the coast of Taiwan.  https://www.taiwannews.com.tw/en/news/3719897

All of this adds up to a lot of tension in the region that seems to be part of a bigger global trend: China and Russia appear ready to fill the vacuum of power and influence created by the president of the United States, who is turning the US into an unreliable bit player in global politics.

Xia-hai City God Temple, which was built by immigrants who wanted the neighborhood to welcome everyone. It is considered a place of protection and its god is considered to be a link between heaven and earth.

What an education is travel….