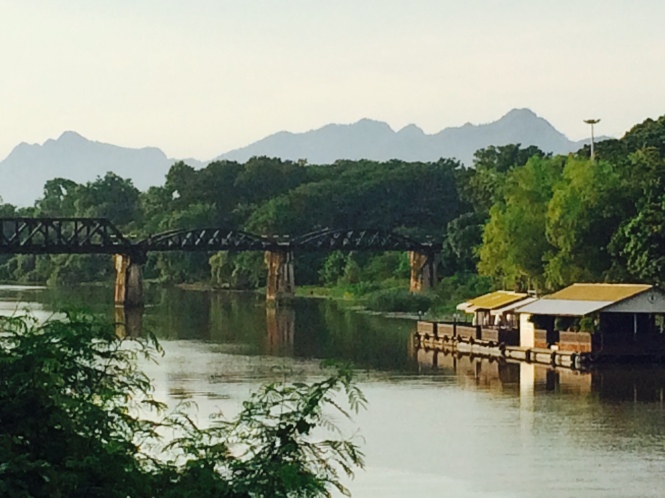 The train travels through lush tropical  countryside with a lot of clack clacking and sideways jogs.  Food hawkers come through at every stop with barbecued chicken and pork buns and rice cakes wrapped in banana leaves.  The conductors “wai” at you after punching your ticket.  Less charmingly, the train has no air conditioning except for open windows, which didn’t seem to do much for the temperature in the car. I was vaguely comforted to see that even the Thais on the train seemed somewhat affected.

I could have ridden on an air conditioned bus but chose the train to Kan because it runs on the line called the “Death Railway”, which was built by tens of thousands of prisoners of war — mostly British, Australian and SE Asian — during World War II, when Japan was making its march through Southeast Asia to India.  The Death Railway goes over the Bridge On the River Kwai, which was my destination in Kan.

Most Americans grow up learning a lot about Hitler’s reign of terror but not much about Japan’s empire building during a similar period. Here is a map of what Japan’s empire looked like by 1942 when the famous bridge was built:

You may notice, especially if you are a relativist, that Japan was targeting territories previously colonized without local permission by the British, the French and the Dutch. 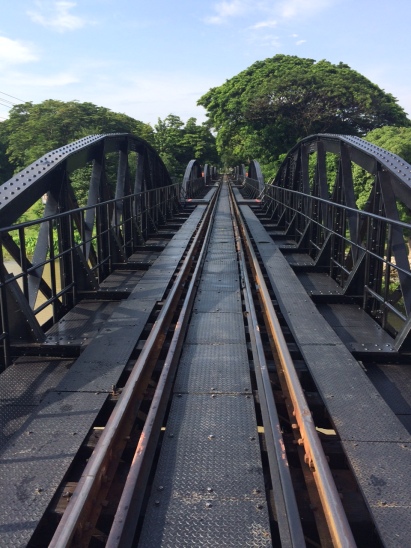 Anyway, Kan is a very small town with an economy that relies a lot on tourists who are curious about the famous bridge. I read “Bridge on the River Kwai” on my way here and it is a great read. But the book and the 1957 award-winning movie of the same name include many historic inaccuracies. For example, they tell a story about bombing a bridge that the Allies did not bomb spanning a river over which there was no bridge.  In fact, the Thais renamed the Mae Klong River in order to accommodate western tourists who traveled to Kan to see the bridge Hollywood made famous.  The book and the movie portray the relationships between the POWs and their Japanese captors as just short of collaborative. A more realistic — and painful — account is included in the recent Man Booker prize winning novel “The Narrow Road to the Deep North.”

I learned a lot of this today on a 15 mile bike ride with Irish ex-pat tour guide, Vinnie.

Vinnie also showed me the Khao Pun cave, located at a temple with a fat Buddha overlooking the river.  We climbed through the cave, which is lined with Buddhas of all shapes and sizes. and full of tiny bats.

After all that exercise, I headed over to On’s Thai Issan Vegetarian Restaurant.  On, whose flyer says she is never off, cooks at a single wok on the sidewalk and chops vegetables on a cutting board the size of a salad plate. Her tiny, not-one-bit-fancy cafe is Kan’s Number 1 restaurant on tripadvisor and there is plenty of good competition in town.

I had the most amazing banana flower salad, full of ginger, basil, garlic, coconut dressing and cashews. Maybe the best Thai dish I have ever had. Ever.