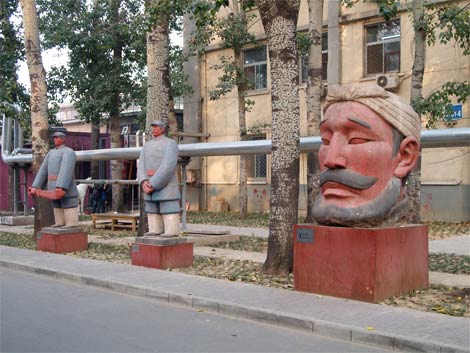 When I went to China a few years ago,  I didn’t think of Beijing as a city with a thriving arts community.  More of a temple/palace/Great Wall kind of place. So I was surprised when I got off the bus in Beijing’s Dashanzi Art Zone.  Also called “798,” the neighborhood is a virtual Disneyland of playful murals, outdoor sculptures and aromatheraputic galleries.

Making the rounds through tree-lined streets of former warehouses, I took a lot of photos and ate a not-very-Chinese-y kale and avocado salad for lunch. 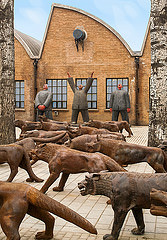 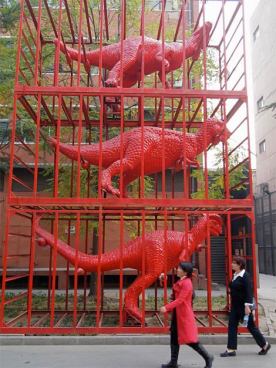 I learned that the 789’s charms have attracted so many tourists that the edgier members of Beijing’s arts community have moved out, among them, China’s famous conceptual artist, Ai Weiwei.
Back at my hutong hotel, a 60-something British couple told me a lot about Ai Weiwei, whose political statements on China’s human rights abuses eventually became so threatening to the Chinese government, it put him under house arrest. When I asked locals where I could see his art, I got blank stares. After a couple of days I gave up, happy to spend my time with the more predictable drama of the Forbidden City and Tienanmen Square.
Fifteen countries and three continents later, I returned home to San Francisco and learned that Ai Weiwei’s art was on exhibit on San Francisco’s Alcatraz Island.  I couldn’t see Ai Weiwei’s work in his home town, but I could see it in my own 9,000 miles away.  On a perfect spring day, I boarded the ferry with friends Emily and Leslie for the exhilarating forty minute ride to Alcatraz.

Ai Weiwei says “the world is a sphere — there is no east or west.”  The Alcatraz exhibit connects us to the prisoner in the “east” who chose a prison in the “west” to exhibit his art — an extended metaphor since Alcatraz is no longer a prison.  It occurred to me that Alcatraz is a short kayak ride to Angel Island, where the US government falsely imprisoned thousands of Chinese immigrants who scratched poetry on the walls that confined them.

For the afternoon at least,  a prison was a safe place to explore our sense of freedom, the power of dissent, art as political expression. We stood in carmped prison cells to hear songs of South African apartheid and Russian dissidents.  We wrote messages on blank post cards that will be sent to dozens of political prisoners in as many countries. We were just a little transformed — not just observers but political activists.

Lego portraits of political dissidents from all over the world. 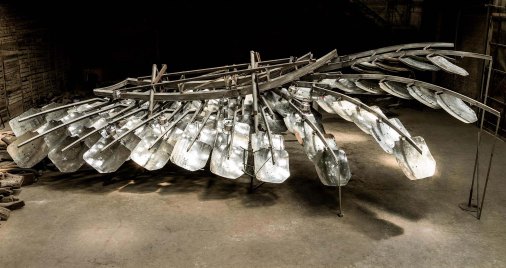 A wing made of solar panels from Tibetan stoves. Heavy, flightless. “We see only one side.”

On the ferry ride back to the City, the San Francisco Bay sparkled against clear blue sky, bright green hillsides and neighborhoods hugging the shorelines of San Francisco, Marin County and East Bay.  From the ferry, we could see the three distinctly different bridges that connect these three distinctly different communities. The Bay’s own conceptual art.